On the April 30 broadcast of “Yoo Hee Yeol’s Sketchbook,” IU charmed with her honesty.

This was IU’s first appearance on the show in three years, and she started off by performing “Palette” and “Through the Night.” While being interviewed by Yoo Hee Yeol, IU pointed out how much time had passed since her first appearance, as she had been 17 years old at the time, but that she was now 25.

Describing her relationship with Yoo Hee Yeol over the years, she made the audience laugh when she said, “First he babied me like his real niece, but now it’s just business.” Despite her joke, IU’s loyalty to Yoo Hee Yeol is obvious, as this was her 12th appearance on the show overall. 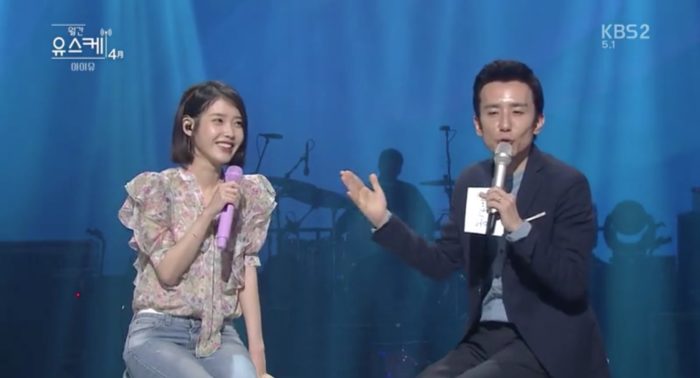 Yoo Hee Yeol prepared a video montage of the top three most memorable moments from IU’s earlier appearances on the show, including the time her voice hit a wrong note in the middle of a song.

IU shared, “The doctor said the structure of my vocal cords doesn’t allow for my voice to go out of tune like that very easily—I really don’t hit wrong notes often—so I can never forget that day.” The reason for the wrong note back then was revealed in the next video clip Yoo Hee Yeol had prepared. IU had just completed an intense dance performance to Rain’s “Rainism” before her vocal performance. 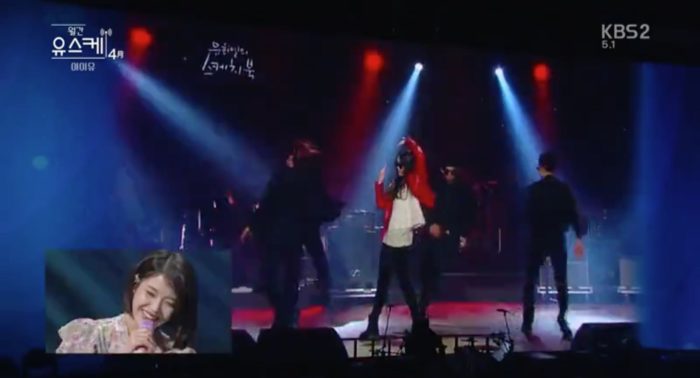 IU also spoke of the G-Dragon’s much talked about featuring on her title track, “Palette.” IU said, “I’m so honored and thankful,” and showed her appreciation for G-Dragon’s participation.

She added, “On broadcasts, I do the rap myself. I considered asking somebody else to do it [for broadcasts], but it got complicated and the original vibe of the song was somewhat lost, in which case I figured it was probably better if I did it for laughs instead.”

Oh Hyuk joined IU and Yoo Hee Yeol for a short interview at the end of her segment to discuss their collaboration, “Can’t Love You Anymore.” They shared a little about their process co-writing the lyrics for the song and their different interpretations of the meaning behind some of those lyrics. 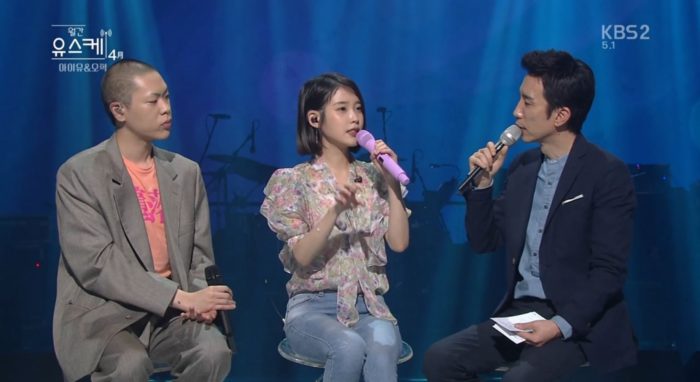 The two artists then performed their much anticipated first performance of their duet to end IU’s segment.