Girls’ Generation’s YoonA showed just how easygoing she is during an appearance on JTBC’s “Let’s Eat Dinner Together” by reacting with grace to some unforeseen embarrassment.

On the May 10 broadcast of the show, YoonA joined the MCs and the actress Song Yoon Ah in trying to ask random people for a meal together at their homes.

When YoonA rang the doorbell at the very first house, a grandfather who was home came to the door to greet her. While he did not recognize the massive hallyu superstar, YoonA still asked politely for a meal. He relayed that the rest of his family members weren’t home right now and that he won’t be eating, to which she replied with cool ease, “Okay. We’ll get going then.” Lee Kyung Kyu laughed at her, saying that they had never had such suave reactions on the show before to being rejected for a meal.

The embarrassing rejections, however, were just getting started. When she knocked on another door, she asked through the intercom, “Do you know Girls’ Generation’s YoonA?” and the homeowner replied, “What is this?” and hung up, probably thinking that it was a prank.

At the next home, the homeowners slammed the door on her before she even had the chance to introduce herself. She laughed while saying, “I’m scared now,” and added, “The charisma of that door slamming was amazing.” 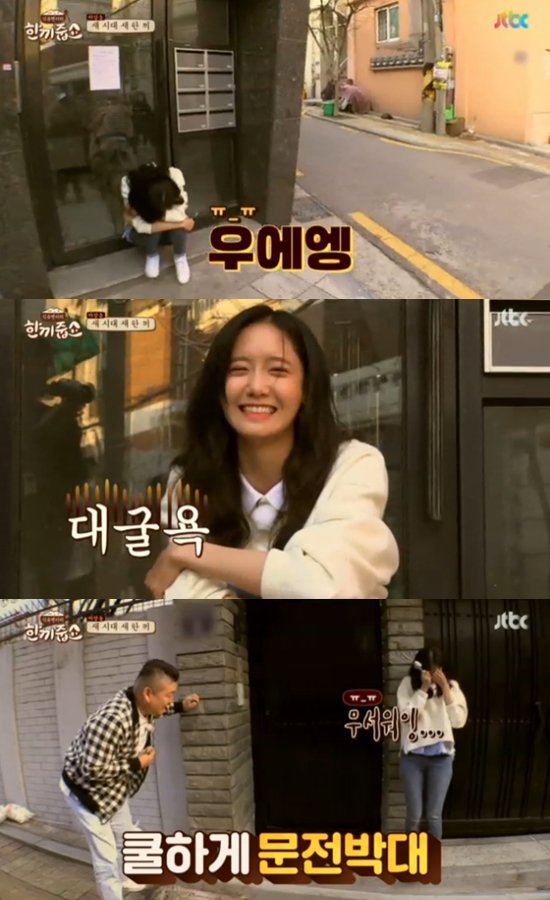 However, YoonA was able to sincerely laugh at the situations and never lost her genuine, easygoing smile. You can really tell what a sweet person she is!