On May 20, WINNER appeared as a guest on the first episode of MBC’s newest variety show, “Brother’s Thoughts,” where member Lee Seung Hoon revealed that he actually had a side job.

During the episode, the WINNER members were talking about what they were good at, but Lee Seung Hoon caught everyone’s eye as being a brilliant “idea bank” as he offered many good opinions.

Lee Seung Hoon was also known for creating WINNER’s dance choreography. To this, Lee Sang Min complimented him, saying, “That boy is going to become a director of a company one day.” 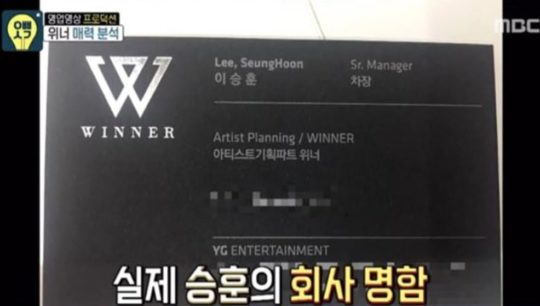 Following this, Kang Seung Yoon revealed, “Lee Seung Hoon already has a title at YG Entertainment. He is the senior manager. He goes to work regularly and even checks up on other employees.”

To everyone’s surprise, Lee Seung Hoon revealed his business card for YG Entertainment that actually said he was the senior manager in the artist planning department.

How awesome is that?