During the show, the MCs asked about the rumor that Kang Min Hyuk once drank expensive champagne at a rooftop bar in Thailand with a female idol named “S.” To everyone’s surprise, he said that it was true and that the idol in question was Apink’s Son Naeun.

“[CNBLUE bandmate] Lee Jung Shin and Son Naeun did a drama together,” he said. “During our Thailand concert, I was going to go to a rooftop bar with Lee Jung Shin when we got in contact with Son Naeun and met up with her.” 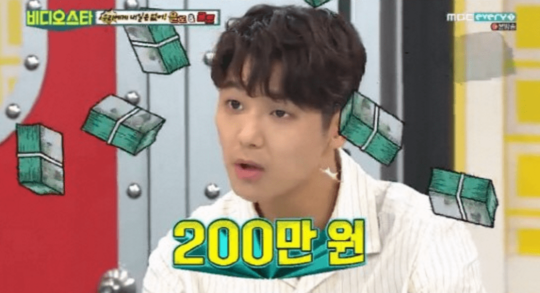 He continued, “We drank champagne together but the next day I got a call from my mom. She asked me if I’d spent money abroad and I said yes. It turned out that that champagne was 60,000 baht in Thai money. When I did the math, one bottle was 2 million won in Korean money (approximately $1740).”