On July 22, EXO appeared on JTBC’s “Ask Us Anything” and talked about the first impressions they had of D.O.

In the “Guess Who I Am” segment, D.O. revealed, “When I first entered [SM Entertainment], Lee Soo Man called me a baby shaman.” He explained, “I was 19 years old at the time, and I was a bit chubby.”

After hearing D.O.’s anecdote, the members teased D.O. by sharing how they had a bad first impression of him just based on looks.

Chanyeol explained, “D.O. always used to glare at people because of his bad eyesight. That’s why people’s first impression of him was not so great,” to which D.O. answered, “I have bad astigmatism. I don’t wear contacts because they’re uncomfortable, so I usually wear glasses, but I take them off when I’m shooting.” 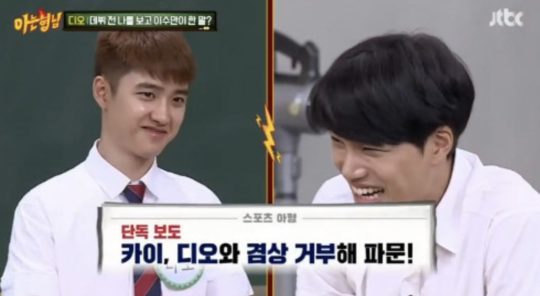 Chaneyol and Suho also revealed how Kai initially avoided eating meals with D.O. during their trainee days. Kai shared, “I thought [D.O.] didn’t like me because he kept glaring at me. I’m shy so I can’t eat with people who I’m uncomfortable with either.”

Despite their rough beginnings, things quickly changed as Kai went on to explain, “After we cleared our misunderstandings, we became closest of friends.”

Baekhyun also revealed his way of getting close to the other members, while Suho talked about a memorable prank.