I had just finished the first twelve episodes of Strongest Deliveryman. I was riding the high it gave my heart and after rewatching my favorite scenes, I eventually had to sleep. But even before sleeping, I wanted to relish the feelings the show gave me. So naturally, I started listening to the soundtrack. Then I discovered that both Go Kyung-pyo and Chae Soo-bin sang for the OST. I liked the sound of Go Kyung-pyo’s “La La La,” but I ended up loving the song after I searched for the lyrics translation. It felt like his character Kang-soo was singing the song to Chae Soo-bin’s Dan-ah. Typical of my obsessive behavior, I then ended up listening to OSTs sung by the lead actors and actresses of various K-dramas. (And I didn’t get much sleep, obviously.)

Despite My Secret Romance getting uncharacteristically and unnecessarily angsty towards the end, listening to “Same” by Song Ji-eun and Sung Hoon from the OST still brings a smile to my face. It got stuck in my head and I remember listening to this song again and again because it was just too cute. Even now, whenever I listen to this song, I flash back to the hilarious and sweet interactions their characters Jin-wook and Yoo-mi shared.

Really, down the rabbit hole I went. I then listened to Ji Chang-wook’s “101 Reasons Why I Like You” from Suspicious Partner, which he also sang a capella on the show, when his Ji-wook was proposing to Nam Ji-hyun’s Bong-hee. Every time I hear this song, a montage of their scenes plays in my head because I feel like the song is truly theirs, and one that Ji-wook certainly dedicates to Bong-hee. (And in my shipper heart, Ji Chang-wook to Nam Ji-hyun.)

There’s also Song Joong-ki’s “Really” from Nice Guy. His character Maru was so frustrating—you think you know his motivations but you actually don’t. That he’s such an opaque character makes this OST such a bonus for me, because I feel like it’s the only time that I know of his true feelings. Or do I? Joo Won’s “Love Medicine” for Good Doctor went in the same vein, where I felt like it was Shi-on expressing the feelings he couldn’t process or understand at first.

I’m currently watching Oh My Ghostess and every time I hear Park Bo-young’s “Leave,” I feel that sadness her Bong-sun feels, of her desperation to hold onto memories. I already saved the song for those days when I just have to drown in my feelings. That instrumental bit? My heart aches whenever I hear it.

Then there’s the whole gamut of idols and professional singers singing for their dramas. Park Hyung-shik has “Because of You” in Strong Woman Do Bong-soon, which makes me feel swoony. Min-min! Seo In-gook and Jung Eun-ji’s “All For You” in Answer Me 1997 was just so apt for the drama. Every time I hear it, I am reminded of not only the drama, but of my own youth. But Jaejoong’s “I Will Protect You” in Protect the Boss takes the cake for making me feel all sorts of things. Even with the OST, he’s giving off Second Lead Syndrome vibes, for singing the couple’s theme song.

Great K-drama OSTs are a dime a dozen. But I think it’s such a blessing when an actor or actress sings for a drama. I think these songs just fire on all cylinders for me because the voice I hear singing is the voice of the actor and thus, the character he or she is playing. It immerses me in the story even more because in my mind, the character is the one singing and the song feels all the more special. Sometimes, it even lets us into how the character really feels, more so than what he or she is showing on the screen. Coupled with what seems like the character’s inner voice, these scenes just end up so much more emotional for me. 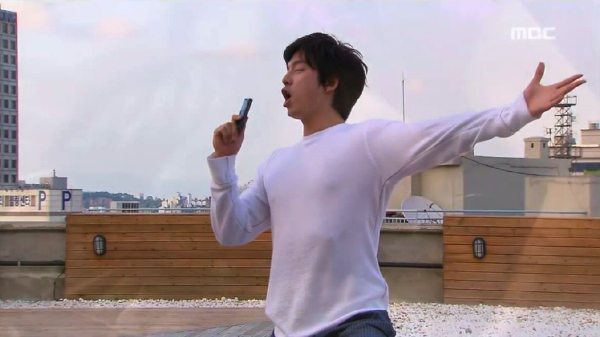 I’m biased towards people who sing well. If an actor in a drama I’m watching suddenly belts out a tune, my love for his or her character multiplies. The fangirl in me gets awakened, and I scour the internet for all the videos of that actor singing. I’m not really into K-pop, though a lot of songs on my playlist are Korean. Usually, these come from drama soundtracks or those I discover because of dramas.

Most of them are sentimental ballads, maybe because they’re slower and the lyrics are easier to follow and digest, or because they are usually the ones with strong or memorable melodies that tell their own stories. And when paired with great dramatic moments, the tension is retained in the music. Just hearing the song again would bring back all the feels, even when I don’t remember the specific scenes anymore. For example, my heart still aches for Jung-hwan (and makes me miss the kids and their parents from Hyehwa-dong) every time I hear Answer Me 1988’s “Hyehwa-dong.” Stories, once accompanied by great music, are automatically elevated and become easily engraved in my memories.

One thing I really enjoy in terms of drama-watching and music is when actors lend their own voices to the characters, either for a song on the OST or in a simple serenade for their beloved (blame the romantic in me). And the best ones are those who sing because it is essential to the plot. For me, it adds something magical to a drama, especially when I discover people with good voices, or when I realize that he or she was actually a singer-turned-actor.

Bong-sook-ah! I love how this MV for Healer’s “I’ll Protect You” contains the best scenes of their love story. Ji Chang-wook’s voice is just icing on the (very sweet) cake. Because I can relate the voice of the characters to the songs, whenever they fill the background of the scenes, there is that additional emotion. Some favorites include Kang-ah’s “Even If I Live Just One Day” for 49 Days, and Secret Garden’s Kim Joo-won singing “That Man.” There are also some cases where I just like certain songs from the soundtrack, without liking the drama itself. Case in point, I loved the song Gong Yoo sang from Big’s OST, “Because It’s You.”

There’s no better way to make me (and the other half of your OTP) love you more than to serenade them. The most iconic example for me is Han-kyul’s wake-up song “I Love You” for Eun-chan (lucky girl). Oska’s “Here I Am” in Secret Garden made me wish for a Christmas concert that is just for me. And more recently, Tae-swoon in School 2017 was “Like a Child” in his pursuit of Eun-ho, but his singing and smooth advances were not child-like at all. The same song was also sung in Flower Boy Next Door: Enrique’s rendition of “Like a Child” (or panda or puppy).

And finally there are songs that are essential to the plot. This is commonly found in musical dramas, such as Monstar, Shut Up: Flower Boy Band, and Dream High. I loved the collaborations and the covers of well-known songs in Dream High, but Sam-dong singing the song “Dreaming” really got me. Those tears! I felt his struggle due to his loss of hearing, his trust in Hye-mi, and finally the relief of being able to follow his dream. That scene really made me believe in the genius that he is, and had me amazed at that awesome adjusting and matching of pitch.

Another actor I started following mainly due to his voice and musicality is Jo Jung-seok. His duet with Kim Ji-won in What’s Up showcased his strong vocals, and his guitar playing in Oh My Ghostess was sweet as chocolate, but it was his Shi-kyung in King 2 Hearts that made me a big fan. The first time Lee Yoon-ji sang the song “First Love” for him, it was because he felt mocked and she felt sorry. But throughout the song, through the secret glances between them, we could clearly sense the feelings of respect and love starting to grow between them. When it was his turn to sing “First Love” to his first love, it was to give her courage to sing again. That scene was so sad! Oh how I longed for a duet with the princess and the Earnest Bot.

How could a song hurt so bad and so good at the same time? Yoon Yoon-jae singing “Memories” and his eventual confession during the noraebang party in Answer Me 1997 had me questioning how timing and brotherly love could be such a hindrance to these two childhood friends. But at least they had a happy ending, and two lovely duets to boot: “Our Love Like This” for reminiscing that heart-crushing scene, and “All For You” to give us back the happy vibes). Another win because it also introduced me to Seo In-gook as an actor and a great singer.

But who am I kidding? I just want to hang out with all of these guys and sing our hearts out at the noraebang. Even if I won’t understand half of what we’ll be singing.