SBS’s “JYP’s Party People” aired its final season one episode on October 21 with groups B1A4 and MAMAMOO as its guests.

B1A4’s Baro expressed his love for his members by sharing a story. Baro said, “My parents don’t live near me because I came from the countryside and I live in the dorm [with the members]. On the morning of my college entrance exam, I came out to the living room and there was a lunch box. When I opened it, [the members] had made a heart with beans [on top of the rice] and left me a hand-written letter. I was so thankful for my members.”

MAMAMOO’s Moonbyul shed tears when speaking about her members and said, “It was difficult being a rapper in team [full of] vocalists, but I was thankful when [my members] told me I was doing a good job. They are a big source of strength for me just standing by me.”

Park Jin Young then asked B1A4’s maknae Gongchan when he was moved by his members.

Gongchan answered, “There was a time when I had to get surgery because I was really sick. I was in so much pain then, but the members said we should suspend promotions right away without a moment of hesitation. They said my body came first and I was so thankful for their thoughtfulness. I didn’t know they would think of me that way. I felt so sorry, I endured the pain.”

Park Jin Young commented, “So, it’s a situation where the older members said let’s stop, but you as the younger felt sorry and said let’s continue.” Gongchan replied, “Everyday I feel moved by my members.” 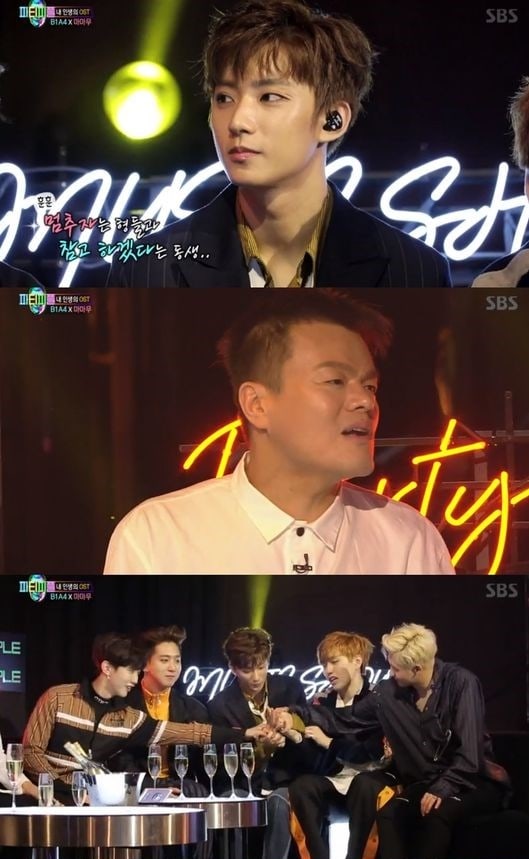