“Oh, the Mysterious” tells the story of a man who was originally on a death row, but succeeds in breaking out of prison and pretends to be a detective. Yoon Kyun Sang takes on the lead role as the fake detective who goes by the name Oh Il Seung although his real name is Kim Jong Sam.

The released pictures show that things haven’t gone well for Kim Jong Sam. He is cornered by members of the National Intelligence Service including Kwak Young Jae (Park Sung Keun), Ki Myun Joong (Oh Seung Hoon), and Baek Kyung (Kim Dong Won). As the three men dressed in black confront Kim Jong Sam on the top of a building, he appears to be tense but hardly obedient. 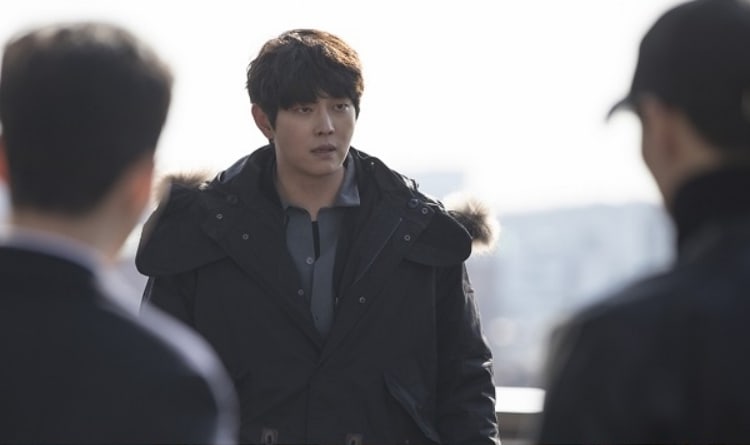 In one dramatic still, Kwak Young Jae is pressing Kim Jong Sam so that his upper body is leaning off a railing. His face is bruised, hinting at a rough fight between the two opposing parties.

Kim Jong Sam has been making the drama gripping since getting involved in the case of the former president’s slush fund. Almost every new episode introduces a new, unexpected challenge for Kim Jong Sam, leading the viewers to speculate on his next move. Yoon Kyun Sang’s excellent acting skills also add to the intensity of each scene.