Producing director (PD) Lee Jin Joo has opened up about the explosive response that “Youn’s Kitchen 2” has already received.

The first episode recorded average ratings of 14.1 percent and peaked at 17.3 percent in real-time ratings, which is higher than the highest ratings recorded for the first season (average 14.1 percent, peaked at 16 percent in real-time ratings). The PD said, “I’m very grateful and happy for all the love our first episode received. On one hand though, we feel a sense of pressure because the ratings were much higher than we could have ever expected. We still have a long way to go, and our crew will continue to work hard till the end.”

When asked how the cast reacted to the ratings, PD Lee shared, “As soon as the first episode finished airing, Yoon Yeo Jung contacted me and said the response was so great that she was worried whether it could continue for the whole season. Lee Seo Jin, Jung Yoo Mi, and Park Seo Joon were all happy too, but I think they were a little worried as well. I think both the cast and crew felt the same way.”

The main dish of “Youn’s Kitchen 2” is bibimbap. According to the production staff, a lot of foreign customers in the first season had asked if bibimbap was on the menu. That memory is said to have influenced the dish’s inclusion in the second season.

The PD said, “Yoon Yeo Jung said she’s really confident making bulgogi, so we thought she would be okay with making bibimbap if we made bulgogi the main topping. While preparing for the show, we studied what kind of image foreigners have about Korean food, and it looked like many people thought of Korean food as ‘healthy food,’ with bibimbap being the main dish they knew. There were actually quite a lot of customers who ate bibimbap at our Garachico restaurant because they saw it as a healthy option.”

Finally, PD Lee Jin Joo concluded with a taste of what viewers can expect from the second episode. She said, “In the upcoming episode, Yoon Yeo Jung will take on the challenge of making japchae. By the end of the first episode, there are only three items on the menu, so Yoon Yeo Jung will try to make japchae and add more items for people to choose from. The cast will be interacting with even more customers and grow close together.” 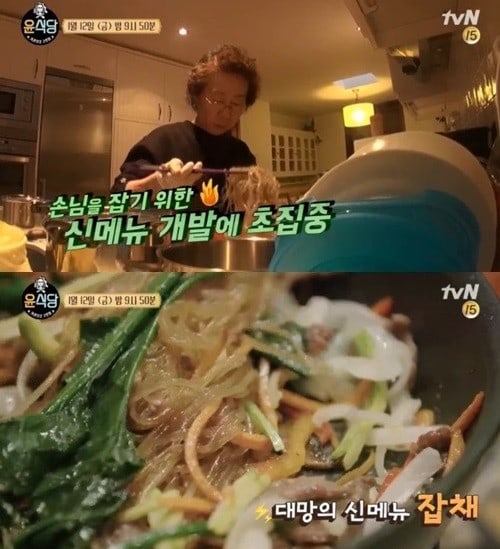 “Youn’s Kitchen 2” airs every Friday night on tvN at 9:50 p.m. KST and follows Yoon Yeo Jung, Lee Seo Jin, Jung Yoo Mi, and Park Seo Joon as they run a Korean restaurant in the town of Garachico on Tenerife Island.