You Who Forgot Poetry: Episodes 9-10 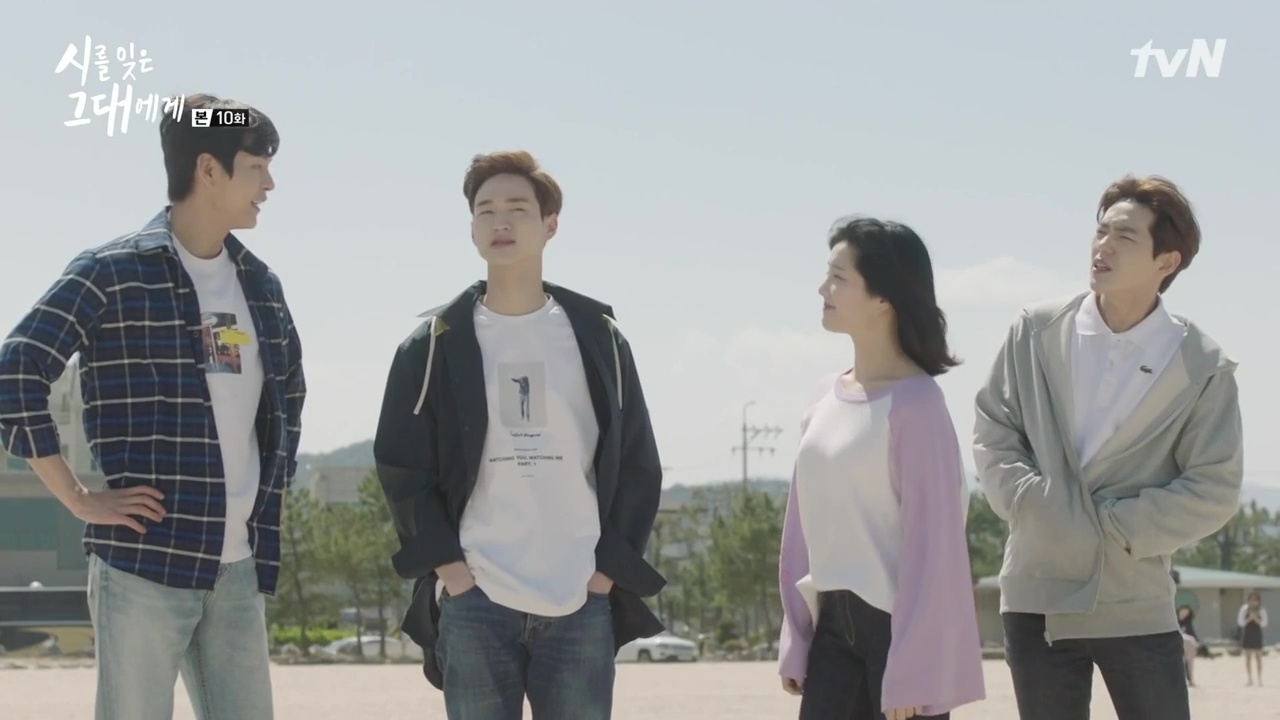 Now we’re settling into our second half trajectory, Min-ho’s far from being the only character to turn a corner (and what a welcome turn it is). This week brought a lot of threads to a head, leaving us to deal with the fallout of some unexpected events. There may be sea-changes ahead, but for now, we can still enjoy the poetry of it all. 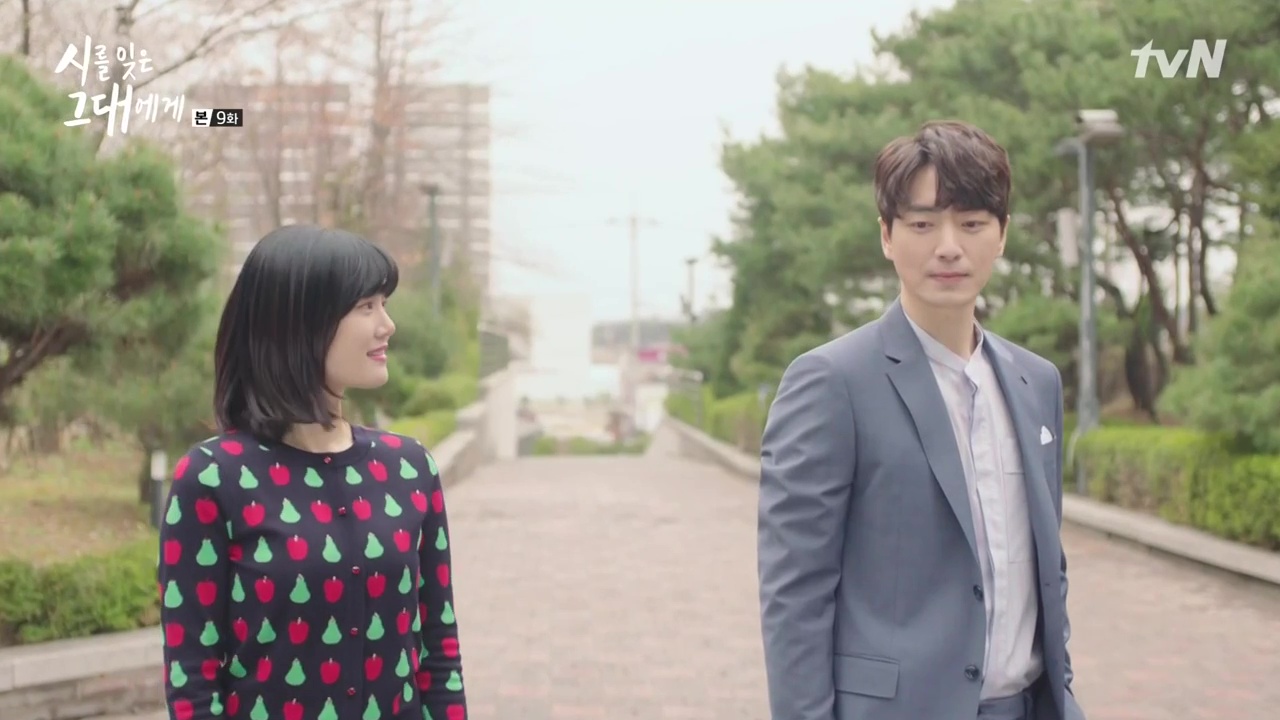 Chief Yang (Seo Hyun-chul) surprises the team by announcing that he’s leaving for a new job, and Bo-young spends the day walking on air now that there’s finally hope that she’ll be hired on full time. When Jae-wook overhears her saying she loves him, it spurs her to confess to him directly.

It all comes crashing down for her that evening though, as Chief Yang’s new job falls through, which means he has to stay at Shinsun after all. Right after that, Jae-wook tells her that he can’t accept her feelings, trying to let her down as kindly as he can. 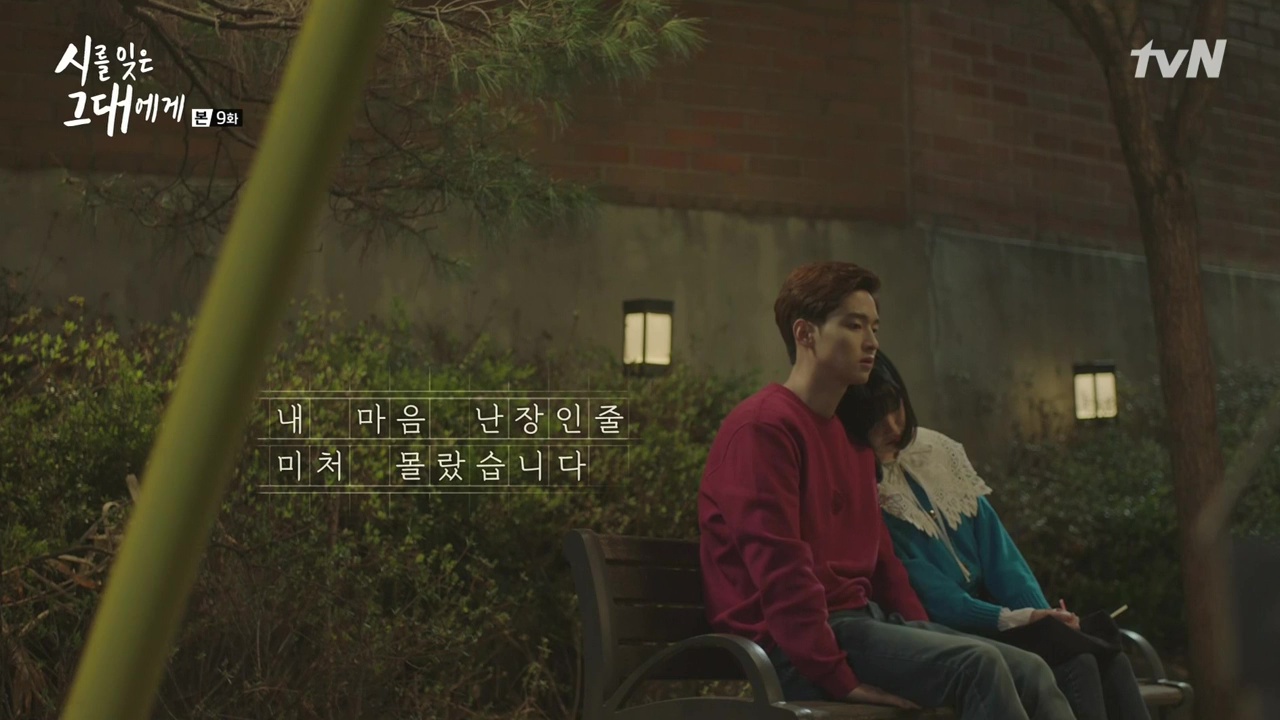 Min-ho finds Bo-young crying by herself and learns that Jae-wook rejected her. But she’s more upset for thinking only of herself when she confessed, not of him and whether his heart was ready. As she falls asleep, Min-ho lays her head on his shoulder.

In the Radiology Department, meanwhile, Joo-yong gets rejected by a VIP patient who calls him an inexperienced baby. Sunbae Dae-bang is outraged, arguing that it’s diligence that counts, not time. 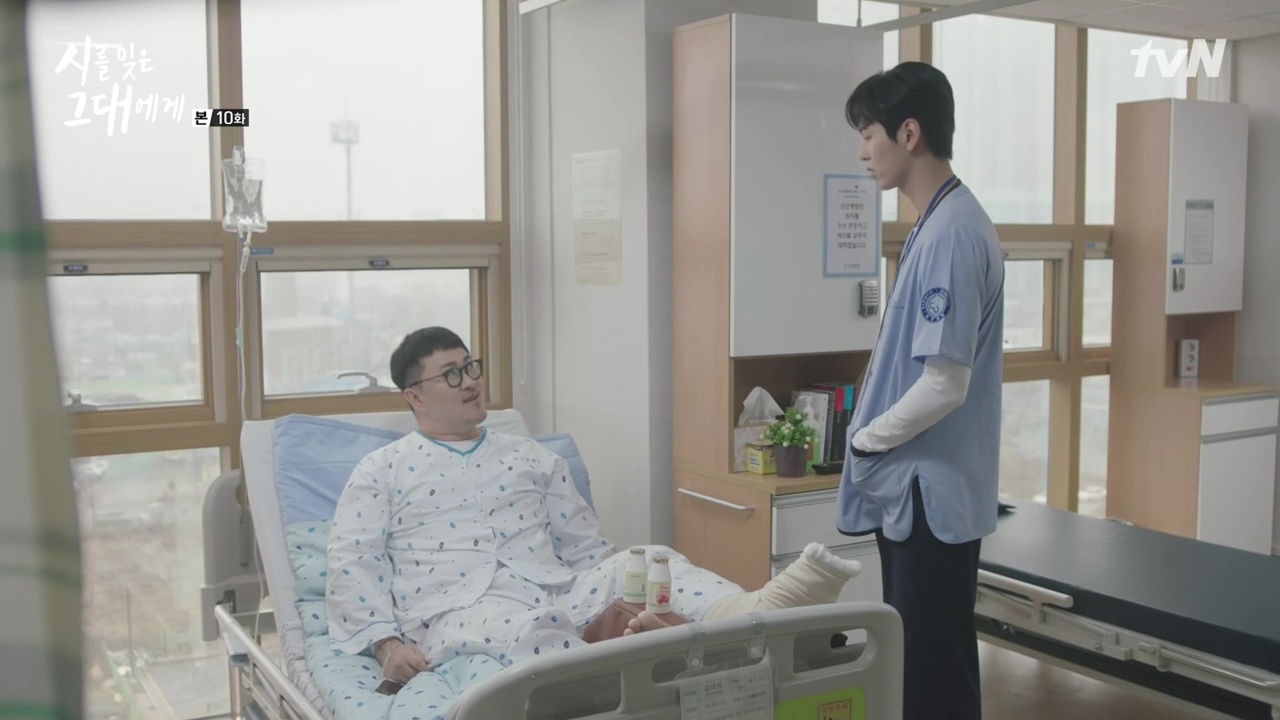 But when Dae-bang later takes a tumble down the stairs and fractures his foot, he goes a little mad (more than usual, lols) and tries to send the entire surgical staff away because they’re suddenly babies to him, and it starts with poor diligent Joo-yong. (Well, he’s diligent at his job and his play, if not his study, haha.)

There’s some Radiology-Physiotherapy crossover drama when Yoon-joo is put in charge of Dae-bang’s rehab. He’s really touched by how she protects his dignity without missing a beat, despite desperately embarrassing circumstances. 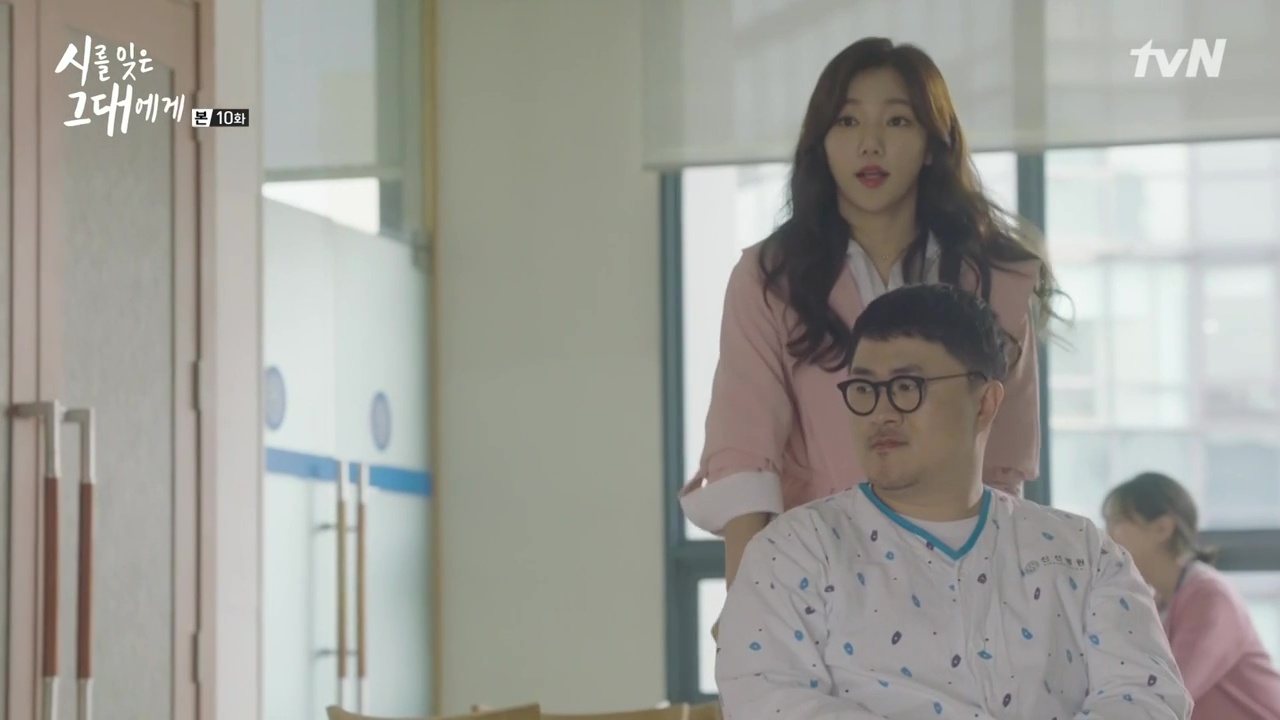 Later, he comes to her defense when someone tries to take advantage of her, and that there is a new loveline in the making…except Dae-bang then assails her with his indecisiveness and Yoon-joo nopes out. I can’t say I blame her. Get it together, Dae-bang-Dae-bang-Kim-Dae-bang!

Despite his rejection, Jae-wook’s been having a tough time, too, especially when he hears about how Bo-young’s been crying all over the place. (Chief Yang thinks it’s because of him.) 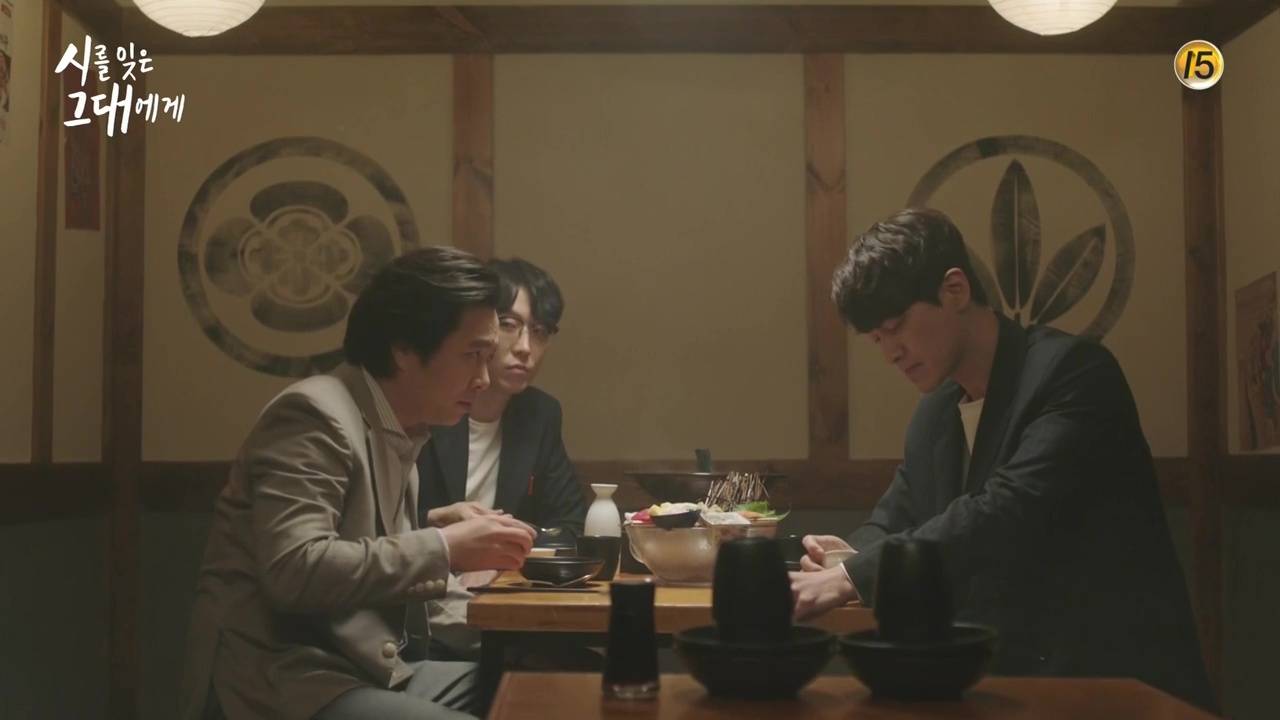 In an unprecedented move, he joins Chief Yang and Shi-won for drinks, and with a few too many in him, he wonders why his heart aches. (Chief Yang convinces himself that it’s because Jae-wook really did want to be Chief in his stead after all. Poor Chief Yang, drowning in his misunderstandings!)

Min-ho and the boys take Bo-young to the seaside, where she can’t help imagining Jae-wook everywhere she looks. 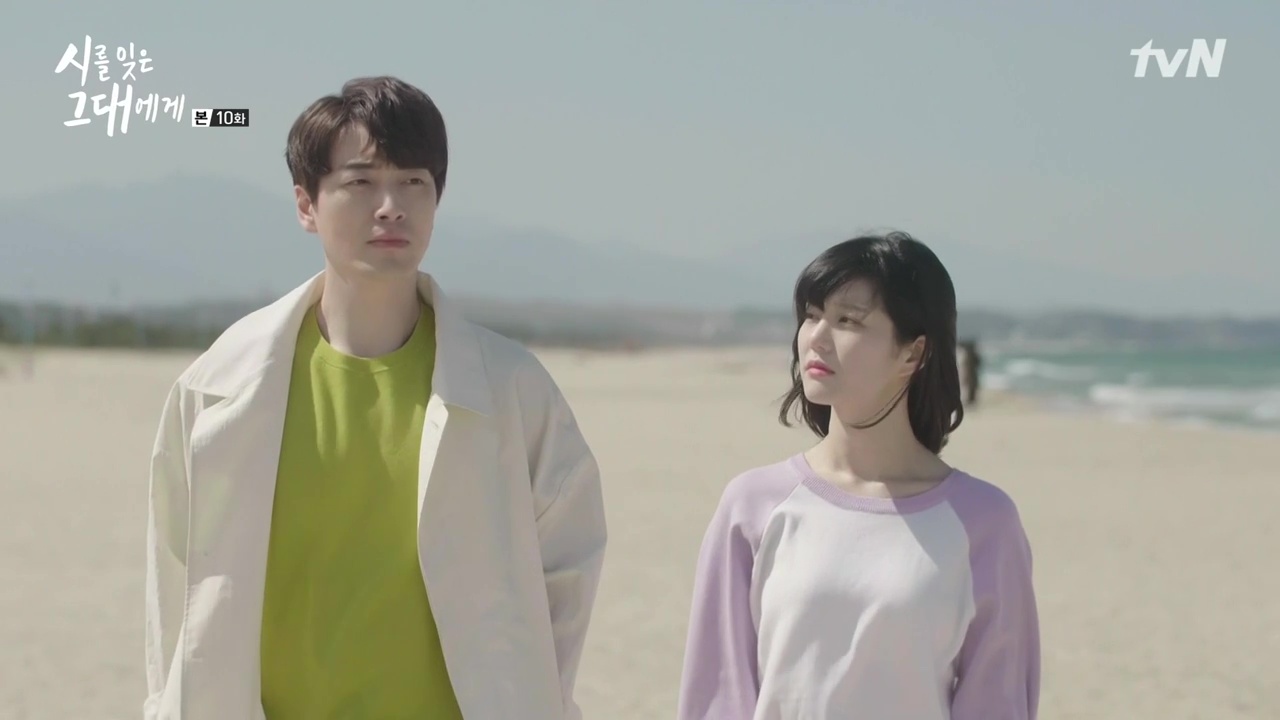 Min-ho is so considerate of her that I’ve already forgotten the jerk of the last few weeks, and she’s grateful for the diversion they provide.

She’s cottoned on to the fact that Min-ho will do something if she wants it, but I don’t think she’s detected the true nature of his feelings yet. Aw, Min-ho. You got me to ship you after all. Or at least, I’m willing to throw you a lifejacket if not quite the whole ship. 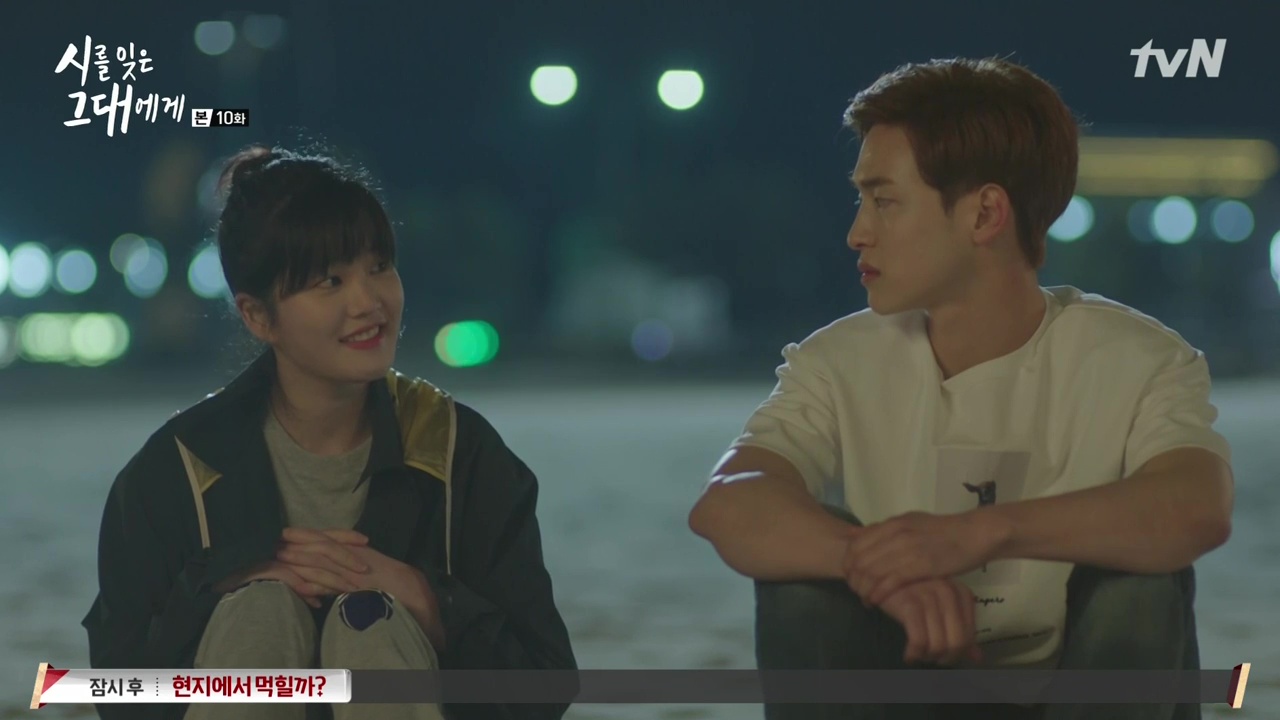 …and the boys sure do provide a lot of diversion, especially when the unthinkable finally happened! Nam-woo was torn apart from his alligator! Or perhaps it’s more accurate to say the alligator was torn from him. Every time these boys turn up together on the screen, I find myself chuckling, “the three rocks.” They’re so lovably dumb, how do they do that? I guess because there’s not a drop of malice in them right now.

But that’s been the theme of this bridge between acts. Everyone has been putting old relationships behind them in order to forge forward with the new. For Dae-bang and Yoon-joo, they’re at last able to put their previous antagonism to bed and see the real good in each other. 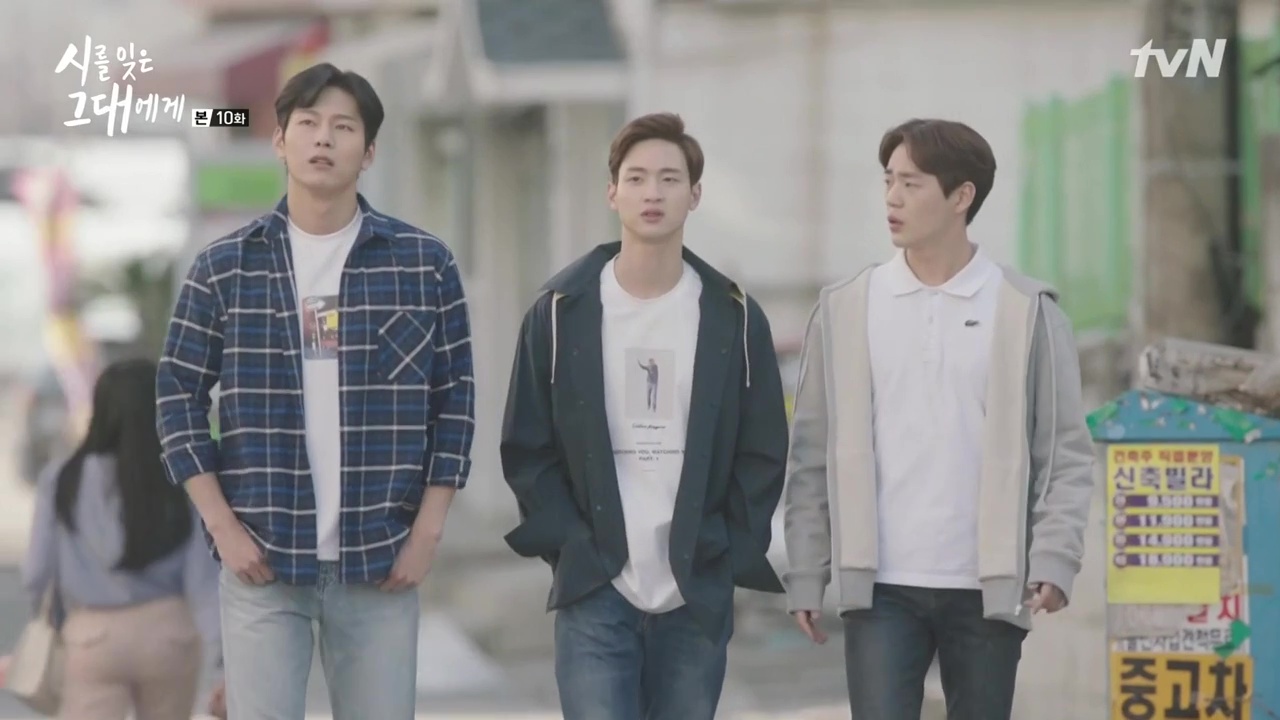 For Nam-woo separated from his alligator, he has surely found his soul-sister in Joo-yong—aren’t they just made for each other? Nam-woo is actually the best girlfriend ever, and his loveline with Min-ho is replete with all the classic couple moments, it’s so great.

Similarly, Jae-wook draws a conclusive line between himself and the ex who keeps trying to find him, and I’m hopeful that his heart is ready now for someone else. I know I’m reneging on my avowed ship, but I’m actually okay with it not being Bo-young, if that’s what ends up being best for both of them. Like Bo-young recognizes, his heart did need healing, and I think without realizing it, that’s the effect she’s had on him. I love that we marked this turning point for him with the poetry, as Jae-wook narrates it for the first time: “It rained since you left.” 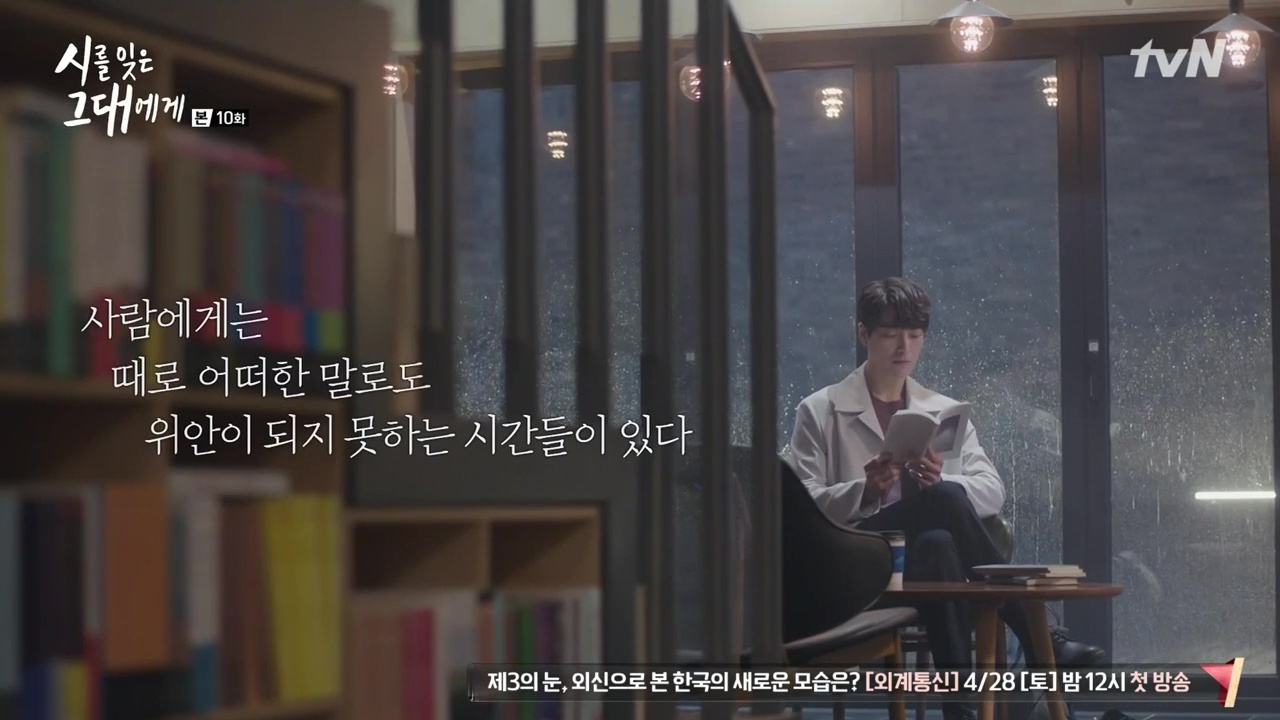 These episodes really reinforced why it is we love our “crybaby” Bo-young so much. Through her contact with her patient this week—the grandfather working really hard on his rehab to make it home to his wife, not knowing she’d already passed away—I felt like we saw Bo-young at her truest, as someone who doesn’t just give strength to her patients, but gains strength from them, too. 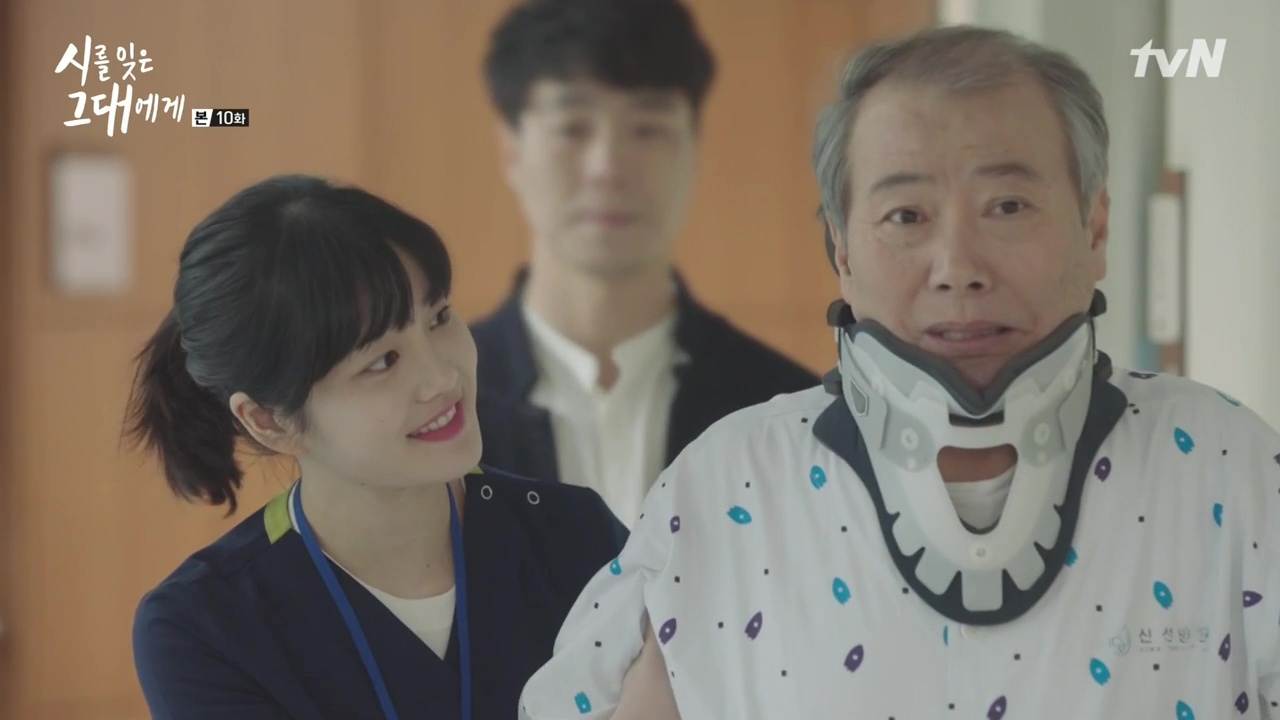 Because of the nature of her work, she’s with people at a stage of their recovery which is essentially positive, but still starting at the lowest point of that curve. That line between ability and disability, illness and wellness, it’s a raw and painful place, but it’s also a place where something truly transformative happens: people make choices to go on with life, to get better, no matter what has happened to them.

She shows just how symbiotic the process of healing is, too, as we see her gathering her patients’ stories, their struggles, their loves and their fears, and then taking it into her heart. She makes herself an indispensable part in restoring not just their function, but also their wellness of spirit. In fact, all of our physios have shown the same deep care towards their patients, whatever their personal flaws. If I were to distill the essence of Bo-young into one line, it would be this: She feels other people’s emotions like they’re her own. And because of that, we feel hers like they’re our own. 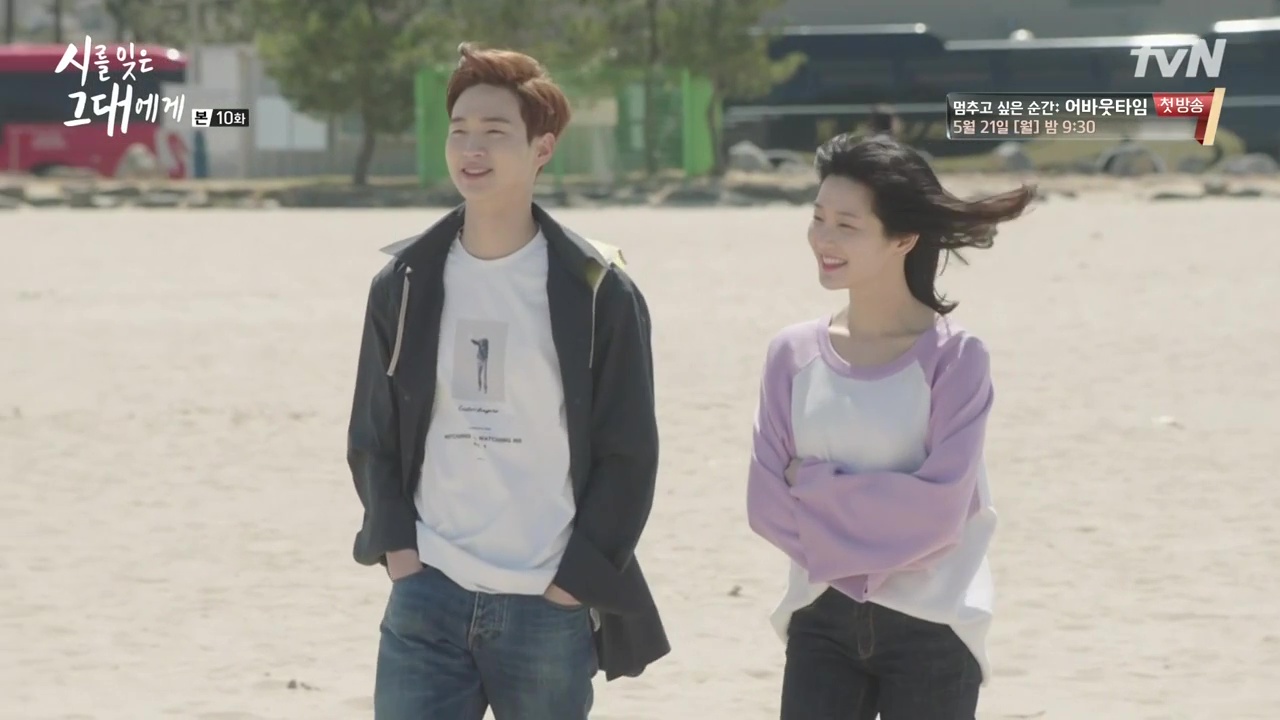