“Produce 48” contestants began the team battles that will determine the first elimination on the June 29 broadcast of the show!

During the broadcast, contestants were given their new grades, which determined their placement during their performance of “Pick Me (Naekkeoya)” on “M!Countdown.”

In the days following, they began preparing for their first team battle mission. As with previous seasons’ first team battles, two groups will face off with the same song for a total of 16 groups and eight songs. The songs for this round are AOA’s “Short Hair,” Red Velvet’s “Peek-A-Boo,” GFRIEND’s “Love Whisper,” I.O.I’s “Very Very Very,” BLACKPINK’s “BOOMBAYAH,” AKB48’s “High Tension,” KARA’s “Mamma Mia” (Japanese version), and TWICE’s “Like OOH-AHH” (Japanese version).

Every individual in each group will be voted upon separately based on their position, with their votes being combined to determine their total team score. The team with the greater amount of audience votes (for each of the eight songs) will be given an additional benefit of 1000 votes for each member. These performances and online votes will determine who will be the first 35 to be eliminated from the program.

Miyawaki Sakura was given first choice of team members as she had been the center for the “M!Countdown” performance, and other contestants were randomly selected to choose their own team members afterwards. The songs were also decided by racing in a similar manner to “Produce 101 Season 2,” with half of the teams getting to perform their first choice while the other eight teams had their song decided for them.

When it finally came time to show what they have prepared, the groups performing GFRIEND’s “Love Whisper” went first.

Son Eun Chae, Wang Ke, Ichikawa Manami, Yamada Noe, Muto Tomu, and Nagano Serika made up the first group. As their team consisted of individuals who were stronger in dance rather than singing, they had a hard time determining parts and overcoming their insecurities. However, they rallied together and put on an energetic performance of “Love Whisper.”

The second group consisted of Yabuki Nako, Yoon Eun Bin, Kim Na Young, Kang Da Min, Kurihara Sae, and Aramaki Misaki. They had great chemistry from the very beginning, but were reprimanded by the dance trainers for not being clean together. The team managed to pull it together for an adorable rendition of “Love Whisper.”

While it seemed as if the first team would win at first, Yabuki Nako and her strong performance impressively earned her 330 votes. Her team won 488 to 334, and all six of the members were given 1000 additional votes each. 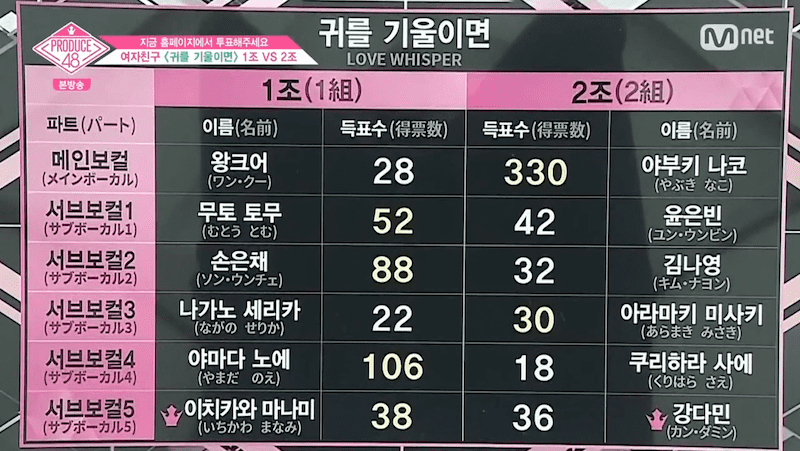 The teams who are taking on “Peek-A-Boo” and “Very Very Very” were up next. Their full performances and the winning teams will be revealed next week.

Realtime online rankings at the time of the broadcast were also announced at the end of the broadcast. Who are you rooting for to make the final “Produce 48” group? Let us know through our prediction poll for international fans!