Now approaching the third anniversary of her marriage, actress Han Go Eun appeared on television with her husband, Shin Young Soo, for the first time on the August 6 broadcast of SBS’s “Same Bed Different Dreams 2 – You Are My Destiny.”

Shin Young Soo first introduced himself, revealing that he is an employee at a home shopping company, and that he works on the planning team. He said, “I’m really nervous right now; I’m even pretty subdued at home… but the fact that we’re doing this together is amazing. I feel good.”

When Shin Young Soo was asked about why he was hesitant to do the show, he said, laughing, “My parents.. my brother said to me a lot, ‘You’re ugly,’ ‘Why do you look like that.’ They would always say mean things like that so I was aware, but when I briefly appeared on [a preview for this show], the reactions that people had were really funny. People said, ‘Han Go Eun.. why?’ ‘Han Go Eun’s husband must be really rich.’ But that actually didn’t sound so bad. That I look like I’m rich.”

He continued, “Han Go Eun enjoyed those comments, and was really happy about them. They made us laugh, and I think we were really positive about it.” 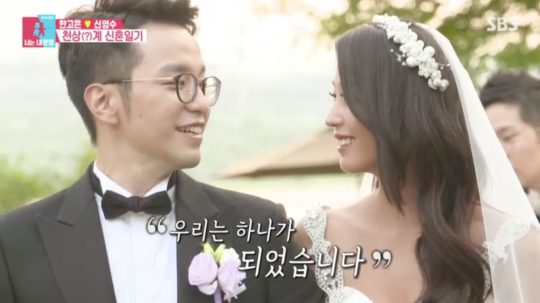 Han Go Eun said she asked her close friends what they thought about her appearing on “Same Bed Different Dreams,” and they simply responded that it’s time for her to show her real self, and to break the fantasy. “I’m really worried right now,” said Han Go Eun. “I wonder if people aren’t going to be disappointed once they see me on the broadcast. Acting is just my job; on the other hand, there’s the woman Kim Go Eun. Go easy on me.”