IZ*ONE had a jam-packed variety show experience on “Idol Room.”

The group guested on the October 30 episode of JTBC’s “Idol Room.” They began by showing off their bright energy, dancing to all three versions of “Pick Me,” from “Produce 101,” “Produce 101 Season 2,” and “Produce 48.”

As it was their first variety show since their debut, the members each had a lot in store for the show. Miyawaki Sakura guessed people’s blood types from just their faces, while Honda Hitomi and Lee Chaeyeon showed off acrobatics and dancing skills respectively. 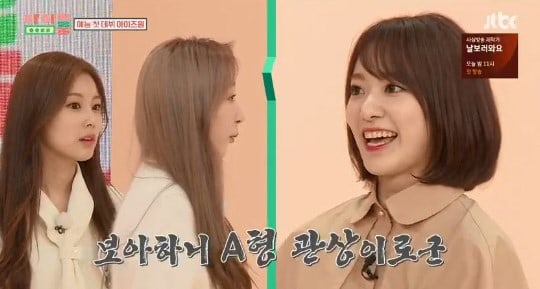 The group then performed their title track from their debut album, “La Vie en Rose” as well as a “nano dance” for the song, where each member is highlighted during a specific portion.

Various battles for the center position then began.

The group kicked things off by trying to decide who was the “cute” center. First up was the official center and youngest member Jang Won Young. She shared that she was in charge of being cute on the team and showed off her aegyo, gaining acknowledgement from the other members. On the other hand, Kwon Eun Bi’s stiff, awkward aegyo and Miyawaki Sakura’s unique wink where her eyes and mouth moved together, made everyone laugh. In the end, Yabuki Nako won the title of cute center with her adorableness.

For the title of “quick reaction” center, An Yu Jin beat Choi Ye Na in a race where they have to hop around in sleeping bags.

The girls also covered dances of many idols, including girl groups like TWICE, Red Velvet, and BLACKPINK, boy groups like Wanna One and EXO, and even soloists like Chungha, Sunmi, and SHINee’s Taemin. While some members struggled, Lee Chaeyeon in particular impressed with her dance moves, and won the title of cover dance center.

On the group’s first variety show appearance all together, Yabuki Nako remarked, “It was my first time on a Korean variety show so I was nervous but it was fun.” Lee Chaeyeon commented, “I’m glad that we got to start variety shows with ‘Idol Room.’”