The members of “2 Days & 1 Night” had a fun guessing game of superlatives with their staff!

The episode of “2 Days & 1 Night” that aired on December 30 was a year-end special with a guest appearance by Lee Yong Jin. For their dinner mission, the producing director (PD) would tell them the name of an award that the staff voted on, and the cast would have to guess which of them the staff picked. If they got the answer wrong, they would have a dish taken away.

First up was the Visual Terror Award, and the cast immediately picked Defconn and Kim Joon Ho as the likely candidates. In the end, they picked Defconn for his various costumes and disguises that he’d taken on over many episodes. However, they were surprised to learn that it was actually Kim Joon Ho who won, and he had everyone laughing as he said, “I want to thank Kim Jong Min for dealing with my spit and farts. I will continue to show how gross I can be.”

Next up was the Worst Complainer Award, and the members had to pick between Kim Joon Ho, Kim Jong Min, and Defconn. The cast went with Defconn again for his fast-paced complaining, that was almost a rap verse, and they guessed correctly. Jung Joon Young was chosen as the winner of the Cost-Effective Award, though the cast had originally guessed Yoon Shi Yoon as he knows how to pick only the important things to do.

For the Precious Award, given to the cast member the staff has a soft spot for, Defconn picked Yoon Shi Yoon and said, “He’s always full of energy but things don’t go his way when he starts getting competitive,” and though some voiced their opinion that it would be Kim Joon Ho, they stuck with Yoon Shi Yoon and got the answer correct. For the Friendship Award, the cast picked Cha Tae Hyun and they were correct, with the staff noting that Cha Tae Hyun had received most of the votes. In last place was Kim Joon Ho and Kim Jong Min brought up the Visual Terror Award as he joked, “It’s because you’re gross and smelly.” 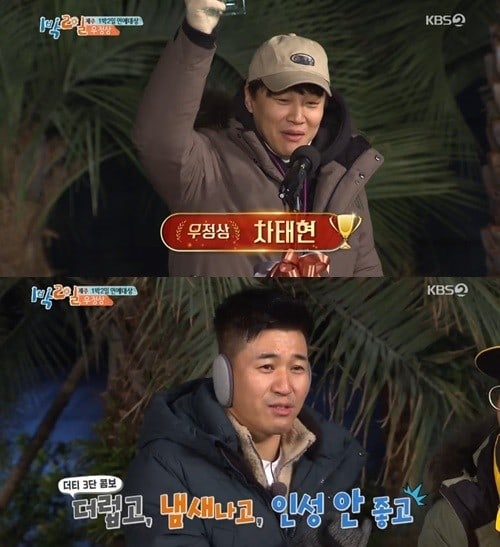 Finally, it was time for the Daesang [Grand Prize] and the cast picked Cha Tae Hyun as the most-likely nominee. However, the win went to Kim Joon Ho and the staff explained that though Cha Tae Hyun had received the most votes from the staff, most of the PDs in KBS’s variety department picked Kim Joon Ho. Kim Joon Ho thanked the PDs and accepted his award.

Catch up with the latest episode of “2 Days & 1 Night” below!