On December 31, Good Data Corporation released their list of TV dramas and cast members that had received the most public attention between December 24 and December 30.

JTBC’s “SKY Castle,” which has also been breaking records for viewership ratings, was the most buzzworthy TV drama for the third consecutive week. Two of its cast members, Yeom Jung Ah and Kim Bo Ra, ranked No. 3 and No. 7 on the list of buzzworthy actors this week as well.

tvN’s “Memories of the Alhambra” saw a rise in public attention this week, with lead actor Hyun Bin breaking Park Bo Gum and Song Hye Kyo’s long-running streak at the top of the buzzworthy actors list. Co-star Park Shin Hye ranked fifth on the same list, while the drama itself held on to its No. 2 place from last week.

SBS’s “The Last Empress” ranked third once again this week on the list of buzzworthy dramas, but lead actress Jang Nara saw a rise in attention from No. 4 last week to No. 2 this week. Her male co-stars followed close behind at No. 4 (Choi Jin Hyuk) and No. 8 (Shin Sung Rok).

The top 4 buzzworthy dramas this week saw no change in their rankings, with tvN’s “Encounter” once again coming in fourth. On the other hand, the rest of the top 10 saw lots of new entries compared to last week: “Children of Nobody” and “My Only One” made reappearances on the list after a couple weeks’ absence and “Feel Good to Die” made the list for the first time due to its finale airing on December 27. 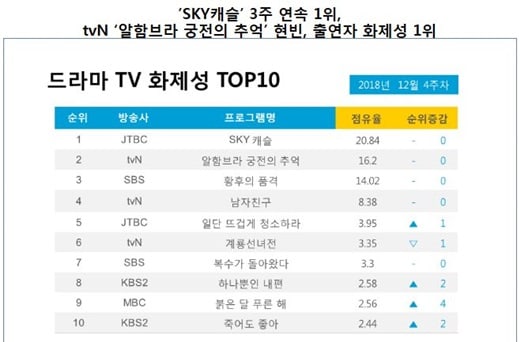 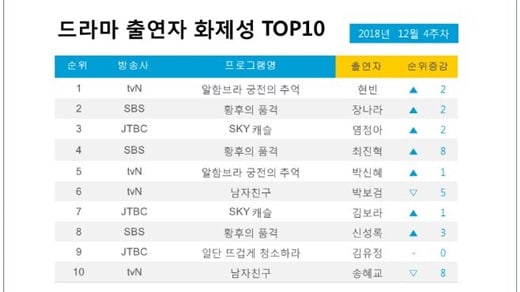 Check out “The Last Empress” below: