BTS’s J-Hope became a warm role model to the contestants of “Under 19.”

On January 10, the “Under 19” production crew released unseen footage of J-Hope visiting the contestants. When the idol entered the room with two hands full of snacks, the contestants couldn’t hide their surprise, and Jeon Doyum especially couldn’t stop staring at him in awe. J-Hope gave them a few pointers about how to perform “Fake Love” and sincerely commented, “You guys are doing well. I really hope you guys will do well. I mean it.”

J-Hope recalled the snacks he brought and called out, “Let’s eat snacks!” The contestants shouted with glee and thanked him for his generosity. J-Hope grew shy and said, “I don’t know if you guys will like it or not.” The contestants opened up the boxes to reveal an assortment of delicious rice cakes. J-Hope explained his reason for bringing rice cakes. He said, “I want to make sure you pass. That’s why I brought rice cakes.” 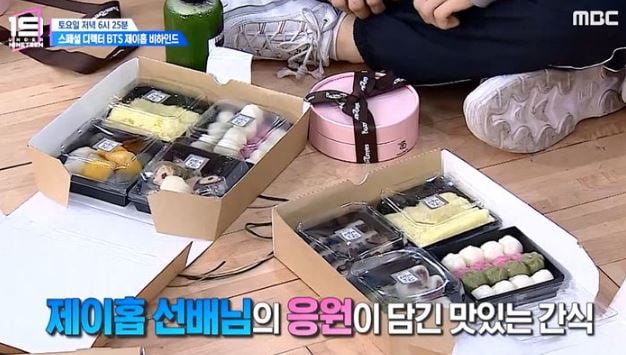 Suddenly, Jeon Doyum ran over and asked, “Can you sign here?” The contestants started crowding around J-Hope for autographs. Jeon Doyum demanded they all get in line and then shyly asked J-Hope to sign his sweatshirt. J-Hope asked, “Can I really sign on your sweatshirt?” and Jeon Doyum eagerly said he could. One of the contestants rained on his parade, saying, “If you wash it, the autograph will erase.” Jeon Doyum didn’t care though and coolly retorted, “I won’t wash it.”

When Shin Yechan came up, J-Hope said, “You’re the leader. The role of the leader is important. I really hope you’ll do well.” When J-Hope was done autographing their clothes, the contestants eagerly thanked him, and he laughed as he commented, “You guys are cute.”

After J-Hope left, the contestants ate the rice cakes he brought while talking about his visit. Jeon Doyum confessed, “I almost cried a few times, but I held it in. When I was in middle school, I went to BTS’s concert and saw them about 100 meters away, and I cried then. I can’t believe he was one meter away.”

The contestants resolved to do their best so J-Hope would be proud of them.

Watch the clip below!

If you haven’t already, check out last week’s episode of the show below!