The latest episode of “YG Treasure Box” included some impressive performances as well as tearful eliminations as the trainees continue to battle for a spot in YG Entertainment’s new boy group.

On January 11, the YG Entertainment survival show aired its ninth episode, where four teams performed in front of 300 audience members for a chance to move on to the final round.

Choi Hyunsuk, Park Jihoon, Kim Yeongue, Yoshinori, and Kil Dohwan chose to perform Wanna One’s “Boomerang.” Expressing confidence about their stage, the team said, “Out of the four teams, we think our performance will be the coolest.”

The team faced an unexpected hurdle when Park Jihoon injured his knee during rehearsals, but the trainees were still able to put on a powerful performance of Wanna One’s song that earned them 647 votes.

“This was the first team I created and it was cooler than I expected,” said Yang Hyun Suk. “While watching today, I thought that Choi Hyunsuk isn’t in Team A for nothing. I think he created a cooler stage than I expected.”

The second stage was EXO’s “Growl” performed by So Junghwan, Yoon Jaehyuk, Kang Seokhwa, Kim Jongseob, and Jang Yunseo. Because this team consisted of trainees who weren’t chosen by other teams, the members were in low spirits.

They had some difficulty with the high notes and choreography, but worked hard during practice. The team showed lots of improvement on stage and received 607 votes.

“These trainees have had the shortest training time, so I see some weaknesses,” explained Yang Hyun Suk. “I hope that the viewers will view it as something that’s expected and watch the performance as a producer. I saw Yoon Jaehyuk rapidly improving.”

Lee Byounggon, Mashiho, Kim Junkyu, Kim Doyoung, and Ha Yoonbin revealed their cover stage of iKON’s “Dumb & Dumber.” Since this team is made up of many talented trainees, they were full of confidence from the start.

They put on an enjoyable performance and received lots of cheers from the audience. This team received a whopping 864 votes and came in first place. “I’m already curious who will win among ‘Treasure 5,’” stated Yang Hyun Suk.

The final stage was a performance of BTS’s “DNA” by “Treasure 5.” Although Bang Yedam was absent during rehearsals due to exams, the teamwork of the trainees stood out during their performance.

“I was the most surprised by Bang Yedam,” commented Yang Hyun Suk. “He danced really well. Kim Seunghun matches more to a fierce performance than I thought. I’ll praise him for the first time.”

In the end, “Treasure 5” received 812 points and was unable to defeat “Dumb & Dumber” team that ultimately came in first place with 864 points. 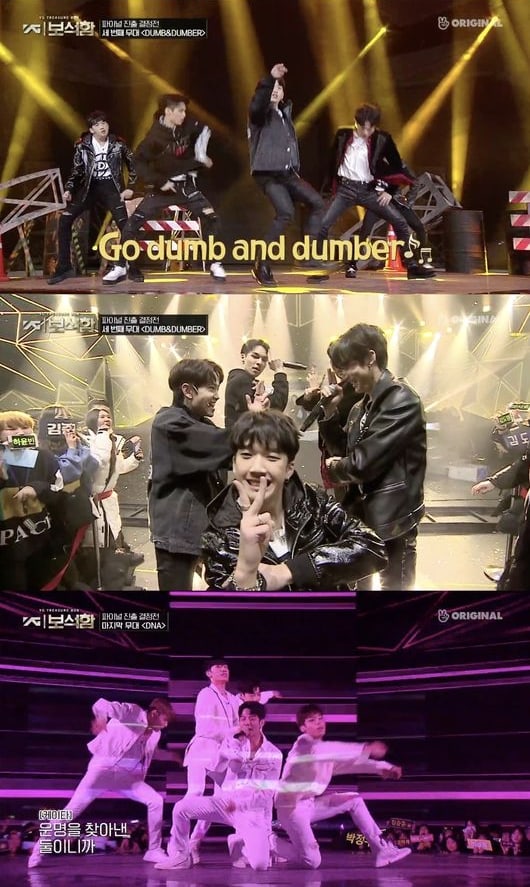 As a result, all five members—Lee Byounggon, Mashiho, Kim Junkyu, Kim Doyoung, and Ha Yoonbin— were able to advance into the final round. Bang Yedam, Haruto, and Park Jeongwoo moved onto the final round while Keita and Kim Seunghun were eliminated from the second place team.

Yang Hyun Suk concluded this episode by announcing that the final debut group will consist of seven members. In addition, two eliminated trainees will be brought back for the final round. 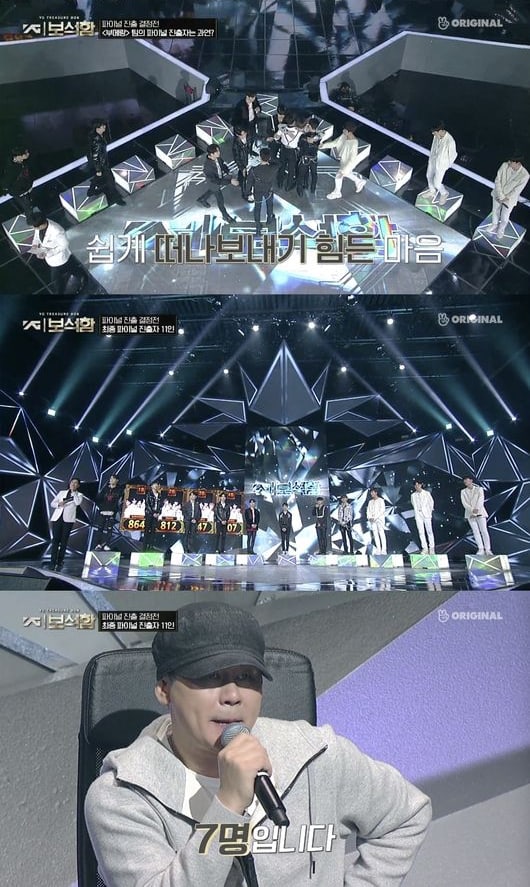