Fans finally learned about Suho’s punishment on the latest episode of “Travel the World on EXO’s Ladder.”

“Travel the World on EXO’s Ladder” is a reality program where EXO travels and makes decisions based on the results of a ladder game.

On the January 22 broadcast, the group was on their way to the airport when Kai said, “Let’s do something when we arrive at the airport before crossing the crosswalk.”

Baekhyun suggested, “What about getting off at the airport and doing a forward roll?” Bursting into laughter, Kai added, “I like it! And shoot a gun after rolling forward like Rambo.” Baekhyun added, “And say, ‘Fire in the hole!’”

Chanyeol started drawing the ladder when Chen said, “I hope Chanyeol gets picked,” but Chanyeol replied, “I’ll never get chosen.” When Baekhyun said, “What if Kyungsoo [D.O.] gets picked?” Kai added, “If you get picked, do it seriously like you’re in a drama and get into character as if you’re Rambo.” D.O. commented, “Let’s take out the forward roll,” but the members pushed forward with the original idea.

After writing the members’ names in order of oldest to youngest (Xiumin, Suho, Baekhyun, Chen, Chanyeol, D.O., and Kai), Chanyeol followed the lines to test their fate. Suho was chosen, and the members cheered with joy. 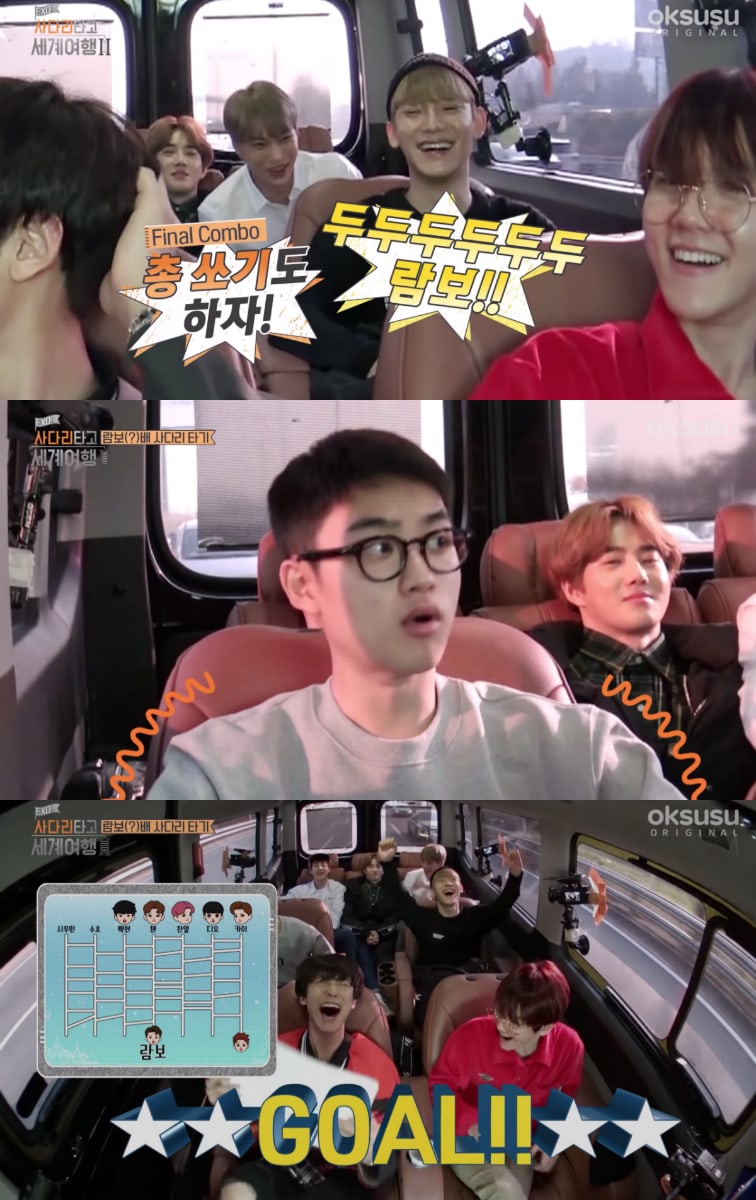 Once they arrived at Incheon International Airport, Suho got out of the van to a crowd of fans and photographers. He put his hood up, bowed, then rolled forward. He shot imaginary guns in the air before making a heart with his arms and bowed again.

The members said that it wasn’t enough and told him to do it once more. Suho then did a bigger flip and made hearts once again. EXO had a blast watching their leader and applauded him.

“Travel the World on EXO’s Ladder” airs on mobile video platform Oksusu every weekday at 6 p.m. KST. Check out the hilarious clip below!