On March 13, 2019, the K-pop industry welcomed back Park Bom. After an arduous hiatus that seemed to have lasted far too long, Park Bom chose springtime to greet us with a mesmerizing single album containing her title track “Spring” alongside B-sides “My Lover” and “Shameful.”

We all know the struggles that Bom went through in order to reclaim her rightful spot as an artist. This had us undergo an emotional rollercoaster as we eagerly counted down the days until her return. Without further ado, here are eight reasons Park Bom’s much-anticipated comeback hit us right in the feels!

In an industry where not all music agencies put their clients first, D-Nation earned praise for their management of Park Bom’s re-established career. The company welcomed Bom in 2018 and worked very hard to rebuild her image and hype her in every possible way. They also made sure to protect her from malicious comments and defamation, especially regarding harmful allegations from the past.

On top of releasing an official statement to show their full commitment towards their artist, D-Nation’s CEO Scotty Kim spoke on behalf of Bom during her showcase to further clear her name and shut down rumors once and for all.

Yes, we’ve been impatiently waiting for Bommie to rise from the ashes since forever, and her live sessions on Instagram and the news of her signing to a new label definitely warmed our hearts. Yet, our thirst wasn’t completely quenched until we finally caught glimpse of her comeback teasers. One thing is for sure: she’s absolutely worth the wait. If you haven’t yet, check out her “Spring” MV!

During her first official public appearance, Bom didn’t need to use many words to convey her emotions regarding her comeback. Nervous yet thrilled, she amazed us with live performances of her songs, and she later took part in a Q&A session with both the MC and the journalists present. Her showcase, being called legendary by the MC himself, displayed all sides of Park Bom that we know and love. See for yourselves down below!

One of the traits we missed most about Bom is her charismatic aura. No matter the platform, we are very pleased to see that the singer’s adorable, lively, and innocent spirit remains unchanged throughout the years. Her interview on Melon 1theK shows a snippet of her goofy yet special character.

Another feature of Bom’s that has been deeply missed is her soothing vocals. Her high notes are particularly one of her strongest assets as a singer, and we’re glad to see her flaunt them ever so gracefully. Enjoy her serenading voice as she performs “Spring” for the first time on “M Countdown” live!

6. Her heartwarming reunion with Sandara Park

We all feared that 2NE1’s final release “Goodbye” would be the last work to ever bring the girls together, but having Sandara Park feature on Bom’s title track brought all kinds of feelings rushing back. In fact, seeing the Park sisters together on an MV set comforted many aching hearts and turned many frowns upside down. Thankfully, Dara made sure to catch this nostalgic moment on tape, much to our delight!

7. Her chart domination with “Spring”

Excitement over Park Bom’s return was equally met with expectations, and that can translate to pressure. However, her title track was a success upon its release, which made her wish of making it on the charts come true.

Despite making a comeback amid heated competition, the artist landed significant spots with her music. She debuted at the top of the social chart of Gaon during the week of March 10 to 16, and she also topped major realtime Korean charts such as Genie, Bugs, Mnet, and Soribada and ranked second on Melon and Naver. On an international scale, “Spring” was No. 1 on iTunes‘ top K-pop songs charts in 11 countries. 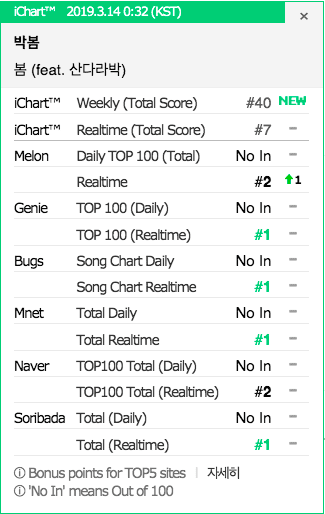 8. Her love and appreciation for her fans

Let’s face it, what’s an artist without their fans? Not only did our lady spring always return the love of Blackjacks and Bomshells even when her future was unknown, but she also made a promise to reward the patience and support of her loyal fans with meaningful music. As expected, Park Bom kept her promise!

Watch her emotional appearance on V Live where she tearfully thanked her fans for the love they showed her MV teaser.

What are your favorite moments from Park Bom’s blooming comeback? Let us know in the comments below!