The cast members of SBS’s “Master in the House” recently talked about their ideal marriages!

On the August 25 broadcast of the show, the production crew asked BTOB’s Yook Sungjae, Lee Seung Gi, Lee Sang Yoon, and Yang Se Hyung about marriage before they met their new master.

Lee Seung Gi jokingly told Lee Sang Yoon, “Are you going to suddenly announce your marriage today? Isn’t it time you thought about marriage?” In response, Lee Sang Yoon said, “What do you mean… I’ve been thinking about [marriage] since I was a teenager.”

Lee Seung Gi asked, “Wow, he’s in a great mood early in the morning. Did something good happen yesterday?” Lee Sang Yoon was unable to answer, as he suddenly exploded in laughter, saying, “Sorry, I just started laughing.” Yang Se Hyung pressed, “Come on, we’ve been together for over a year now. Tell us what’s so funny.” Lee Sang Yoon refused to budge as he insisted, “Aren’t there times like that? When even the breeze is funny.”

Yook Sungjae later talked about his ideal wedding, saying, “I don’t know if it’s possible, but I want to hold a wedding on social media. Instead of renting out the wedding hall, you hold your wedding through a live broadcast. I’ll turn on the wedding song with my Bluetooth speakers and walk in.” Lee Sang Yoon commented, “Wouldn’t your fans be sad?” to which Yook Sungjae replied, “It’s a marriage I’ll be having together with the fans.”

Lee Seung Gi nodded as he said, “Right, since you can’t invite all of your fans.” He then jokingly added, “But the way I see it, he’s either part of the new generation or just addicted to Instagram,” making everyone burst out in laughter. 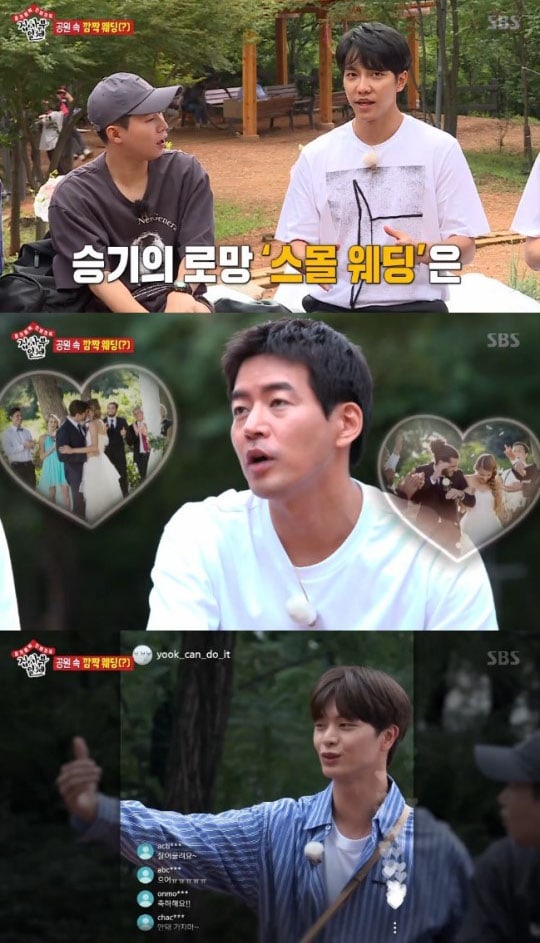 Lee Seung Gi talked about his own preferences and remarked, “Personally, I want a small wedding, and I want to invite the people I’m close to and contact on a regular basis to a special place. I’ll invite the ‘Master in the House’ members. I’ll invite some of the staff members through a raffle. We’d go on a trip to Jeju Island or somewhere like that.” He also said, “Marriage is like a mirage. People say I should be thinking of marriage at my age, but I don’t have anyone to marry and I’m unsure.”

Lee Sang Yoon agreed, saying, “I’ve seen people holding their weddings in other countries, but in a small number. I think it’d be cool to hold your wedding with only people who are close to you.”

Watch the latest episode of “Master in the House” here: