Feeling empty now that “Hotel Del Luna” is over? Missing IU’s stunning performance as Jang Man Wol, or Yeo Jin Goo’s bright smile as Goo Chan Sung? If you loved being immersed in the magical fantasy world of “Hotel Del Luna,” enjoyed the funny yet slightly creepy vibe of the horror/rom-com genre, or were a sucker for Man Wol and Chan Sung’s bittersweet romance, then we have some great recommendations for your next K-drama! Whether you want something else written by the Hong Sisters, the horror/comedy pro writing team behind “Hotel Del Luna,” or you’re looking for some new ghostly romances or sadly sweet love stories, these dramas are sure to please — so dive right in!

Like “Hotel Del Luna,” “Hwayugi” boasts an impressive all-star cast: Lee Seung Gi, Oh Yeon Seo, FTISLAND’s Lee Hong Ki, Cha Seung Won, Lee El, Lee Se Young, and more play magical creatures ranging from charismatic zombies to friendly demons. The drama immerses you in an enthralling magical world that is both endlessly entertaining and ceaselessly funny as these immortals navigate the human world. As for the romance, “Hwayugi” is full of twists and turns: whoever eats Jin Sun Mi (Oh Yeon Seo) can obtain great powers, so naturally the Great Sage Son Oh Gong (Lee Seung Gi) wants to do just this — until he finds himself wearing a magical bracelet that causes him to be madly in love with Sun Mi. Will Oh Gong grow to love Sun Mi for real? And what are they going to do about the impending doomsday that’s been prophesied?

Why you’ll love it: The supernatural world of “Hwayugi” is every bit as captivating as that of “Hotel Del Luna,” and the ensemble cast of wacky immortal beings is as compelling as Del Luna’s beloved ghost employees. Like Man Wol and Chan Sung, Sun Mi and Oh Gong are pros at helping good ghosts and vanquishing evil spirits whose stories also often have social commentaries.

“Bring It On, Ghost” 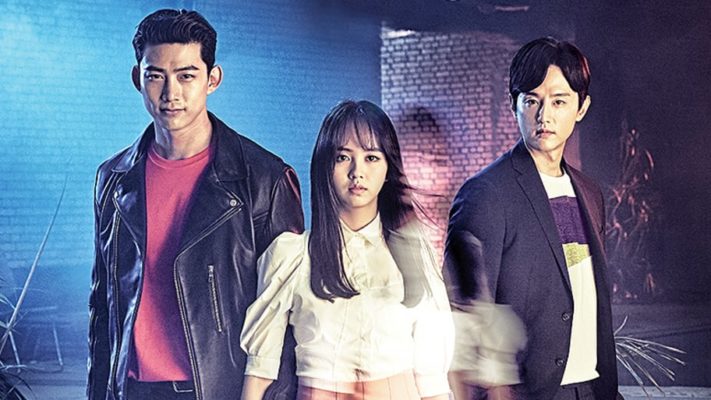 Bong Pal (Taecyeon) is a college student who has the ability to talk to ghosts and tries his luck working as an exorcist to make some spare cash; eventually, he’d like to make enough money to pay for a procedure that will take away his spooky abilities. When he meets Hyun Ji (Kim So Hyun), the ghost of a 19-year-old student who has remained on Earth for five years, the two work together to listen to ghosts’ stories and help them cross over to the next world.

Why you’ll love it: “Bring It On, Ghost” is another horror/rom-com hit featuring a cutely bickering romance between a ghost and human not unlike that of Man Wol and Chan Sung. It’s also sure to delight if you loved watching ghosts resolve the troubles from their lives to move on to the afterworld in “Hotel Del Luna.”

Start watching “Bring It On, Ghost”:

“Arang and the Magistrate” 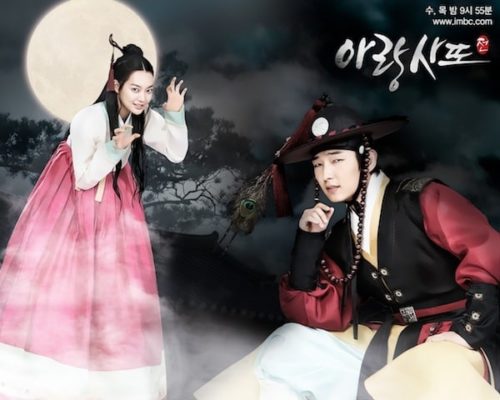 Nobleman Kim Eun Oh (Lee Joon Gi), a man with the ability to see ghosts, is searching for his missing mother. He usually pretends he can’t see spirits to avoid having to talk to them, but makes an exception for Arang (Shin Min Ah) when he notices her wearing a hairpin identical to one he gave his mother before she disappeared. If Eun Oh can help Arang recover her memories of her death and finally rest in peace, will she be able to tell him about his mother?

Why you’ll love it: More horror/rom-com! “Arang” brings a hilariously cute love story between a ghost and a human to life. Plus, if you found the antics of the Ma Go deities irresistibly intriguing in “Hotel Del Luna,” then the fickle gods of Heaven and Hell in “Arang and the Magistrate” will delight you.

Catch “Arang and the Magistrate”: 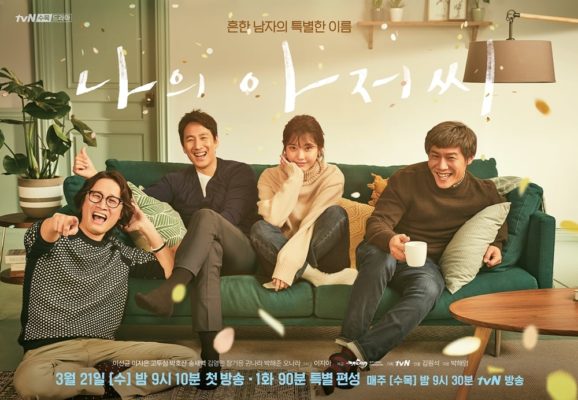 IU tackles a very different, far less glamorous role as Lee Ji An in “My Ahjussi,” a slice-of-life drama about everyday people and the hardships they endure. Ji An is cold and mistrustful due to her past traumas, but when she meets the middle-aged Park Dong Hoon (Lee Sun Gyun), his warmth and kindness teach her to open up and trust. Ji An, Dong Hoon, and his two brothers help each other deal with their hardships, and the group slowly, touchingly begins to heal each other. “My Ahjussi” has been lauded for its meaningful take on the hardships of life, but if you’re looking for something light and fluffy, this is not the drama!

Why you’ll love it: While “Scarlet Heart: Goryeo” is always a fan favorite, IU’s acting has only improved since her Goryeo days, and her award-winning role in “My Ahjussi” is hauntingly enacted. If you thought “Hotel Del Luna” ended beautifully, or if you enjoyed the touching lessons on forgiveness and healing that the “Hotel Del Luna” ghosts learned, then “My Ahjussi” is sure to please. 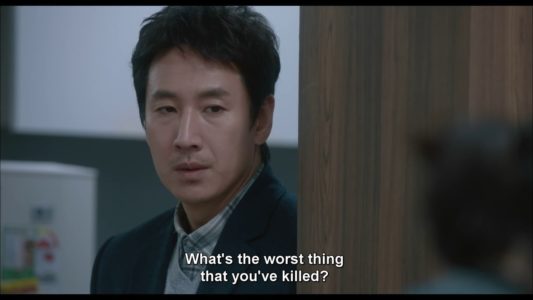 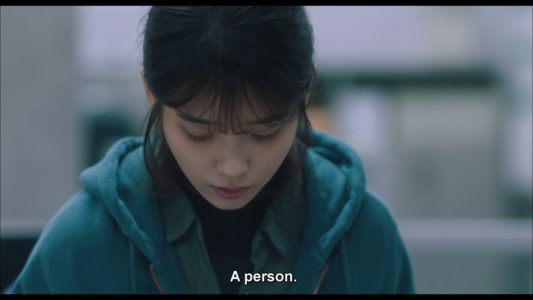 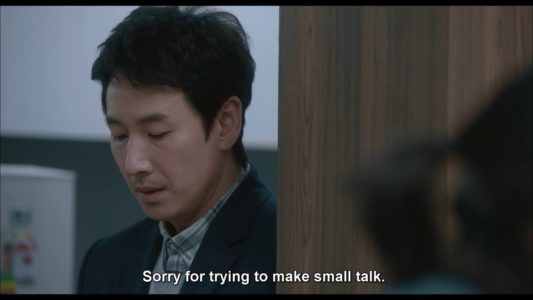 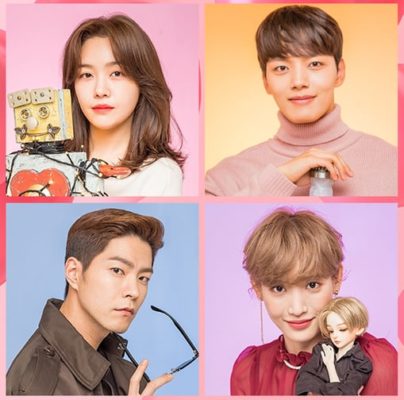 Da Da (Minah) decides she is done with love forever after her seven-year-long secret relationship with the actor Ma Wang Joon (Hong Jong Hyun) comes to an end. But when love robot Zero Nine (Yeo Jin Goo) is accidentally delivered to Da Da’s door, will she be able to resist his charms? Programmed to be the perfect boyfriend, Zero Nine is loyal and charming, not to mention handsome. But how will the two fare when Wang Joon comes back into Da Da’s life and Zero Nine’s original owner shows up?

Why you’ll love it: Yeo Jin Goo! As in “Hotel Del Luna,” “Absolute Boyfriend” features a cold-hearted woman slowly opening up to Yeo Jin Goo’s charms (who can resist?). Like Chan Sung, Zero Nine shows us the meaning of true, selfless love, and Da Da will forever be better for it. 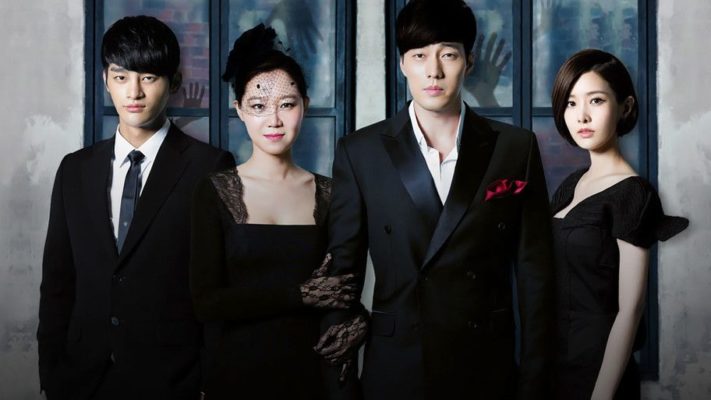 Ever since an accident, Tae Gong Shil (Gong Hyo Jin) has been able to see ghosts and has had no peace from their continual haunting — until she meets the greedy and aloof CEO Joo Joong Won (So Ji Sub). Whenever Gong Shil touches Joong Won, the ghosts disappear, and he lets her stay by his side in return for her help in tracking down a lost fortune. As the unlikely pair spends more time together, they slowly change each other for the better, with Gong Shil growing less afraid of the world around her and Joong Won becoming less materialistic.

Why you’ll love it: Another horror/rom-com written by the Hong Sisters, “Master’s Sun” actually provided some inspiration for the “Hotel Del Luna” universe (CEO Joo owns a hotel, among other properties). More quirky ghost stories abound, as well as a sweet romance that starts with reluctance and a cold-hearted, greedy CEO (Looking at you, Man Wol, with your sports car collection!). 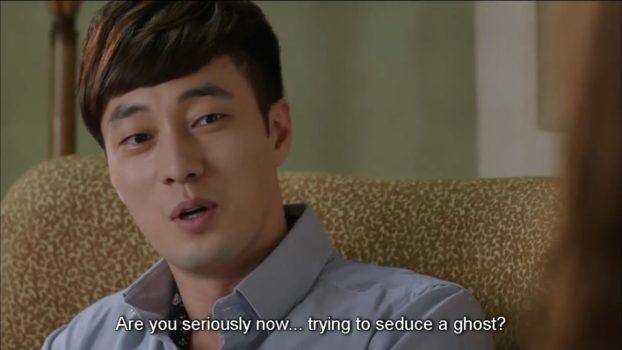 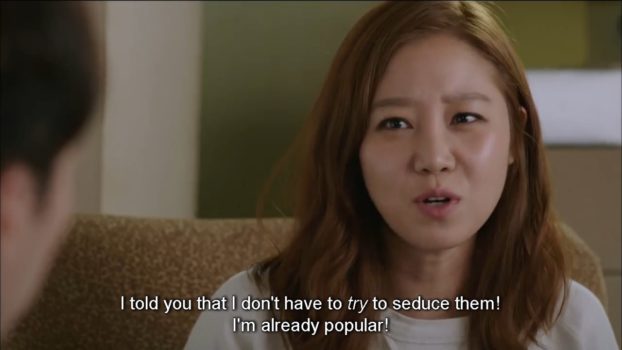 “Mirror of the Witch” 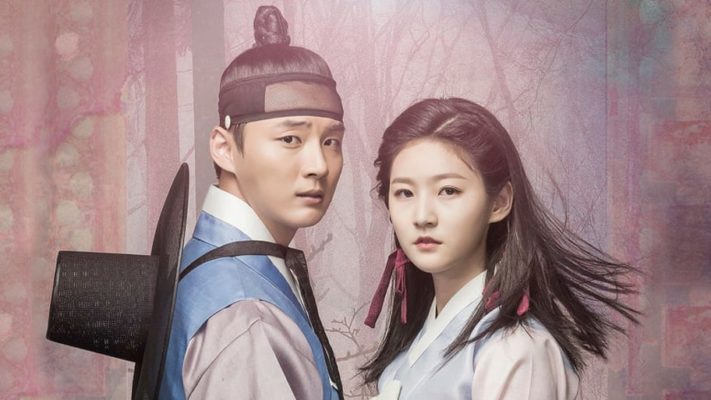 A queen who wants to give birth to a prince enlists the help of a shaman to do so — but when black magic is involved, the queen gives birth to twins, including the cursed princess Seo Ri (Kim Sae Ron). Seo Ri is abandoned and grows up as a witch, isolated due to the curse that has been placed on her. When the royal physician Heo Jun (played by Yoon Shi Yoon, based on a real historical figure from the Joseon period!) stumbles into her life, he determines to help her lift the curse and get her life back.

Why you’ll love it: Another drama that transports you to an enchantingly unique supernatural world. Heo Jun is as determined to help Seo Ri as Chan Sung is Man Wol, and the romance of “Mirror of the Witch” is as simple and sweet as Man Wol and Chan Sung’s until the very last!

Catch “Mirror of the Witch”:

“My Girlfriend Is a Gumiho” 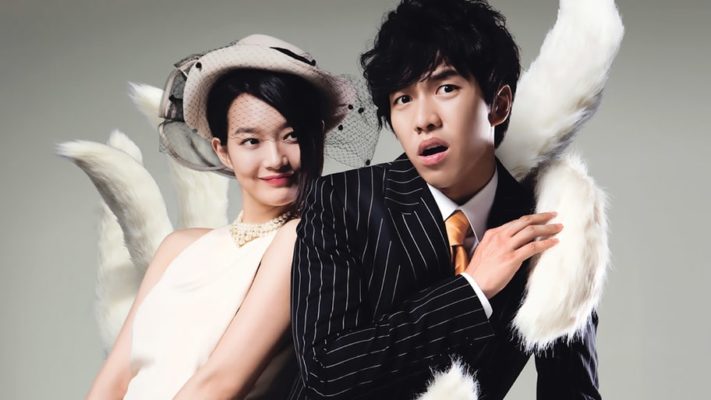 This Hong Sisters drama is based on the lore of the gumiho, or nine-tailed fox. Mi Ho (Shin Min Ah) is a gumiho in human form who wants to become human for real, so she makes a deal with college student Cha Dae Woong (Lee Seung Gi). If Mi Ho lends Dae Woong her fox bead for 100 days, she can become human — however, neither of them is aware that the process requires Dae Woong’s death. If Mi Ho does not get her bead back, however, she will die. This whole matter is complicated, of course, when the two begin to fall in love.

Why you’ll love it: The Hong Sisters said that the inspiration for “Hotel Del Luna” came while they were working on “My Girlfriend Is a Gumiho,” and you can see for yourself how the ill-fated romance and the mythological world inspired Man Wol and Chan Sung’s story!

Catch “My Girlfriend Is a Gumiho”: 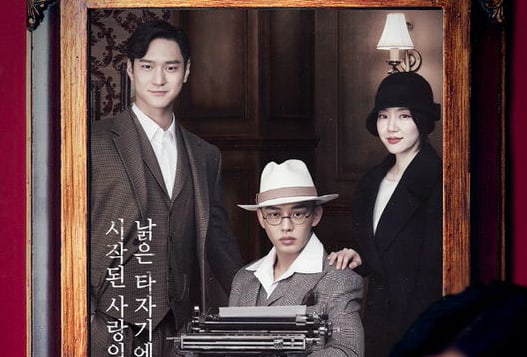 Han Se Joo (Yoo Ah In) is a bestselling author as famous for his celebrity good looks as for his work. When he hits a major slump, he receives unlikely writing help from a ghost (Go Kyung Pyo) that came to him via a possessed typewriter — which was delivered to him by his super fan Jeon Seol (Im Soo Jung), who quickly becomes his anti-fan when she discovers Se Joo’s conceited attitude. But the three are bound together in mysterious ways, and the truths of their past incarnations as resistance fighters in Japanese-occupied Korea must come to light if ghost Jin Oh is to rest at peace. Will these secrets threaten the trio’s friendship and Se Joo and Jeon Seol’s blossoming romance?

Why you’ll love it: Just like Man Wol, Se Joo is moody and selfish, yet easily lovable. And if you were spellbound by the way “Hotel Del Luna” revealed Man Wol’s past little by little, you’ll be hooked as “Chicago Typewriter” slowly unfolds its characters’ past storylines, until all is revealed and all can heal. 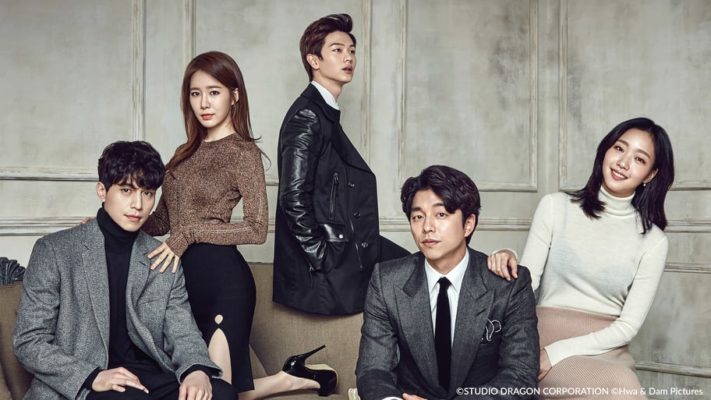 Kim Shin (Gong Yoo) is a centuries-old goblin who is weary of his immortal life and lonely from watching all those he grows close to die. His only hope for ending his life is to meet his destined human bride, who happens to be high school student Ji Eun Tak (Kim Go Eun). But as the two fall in love, moving on to the afterlife becomes increasingly less appealing to Shin (sound familiar?). Add in the frenemy-turned-bromance between Kim Shin and his housemate Grim Reaper (Lee Dong Wook) and some traumatic past events coming to light, and this one is the perfect tear-jerker/fantasy/comedy rolled into one.

Why you’ll love it: With grim reapers, ghosts, and a tragic past that is slowly revealed as the series goes on, the world of “Goblin” will feel endearingly familiar to “Hotel Del Luna” lovers. While the love stories have a similar set up (human guiding an immortal to their long-desired peaceful rest), Kim Shin and Eun Tak are such different personalities from Man Wol and Chan Sung that the two couples are refreshingly unique.

Hey Soompiers, which of these dramas do you recommend? What are you going to watch now that “Hotel Del Luna” has ended? Let us know in the comments!