On the September 13 episode, the cast members were about to eat curry and rice for breakfast when Nam Joo Hyuk surprised them. They were delighted to see him and welcomed him with applause. The actor was previously a fixed member on “Three Meals a Day in Gochang.”

Yum Jung Ah brought up how they had met at an awards show. She asked him if he ate and told him to eat curry and rice after unpacking. The actress then said to Yoon Se Ah, “I’m happy someone who’s good at working is here. Let’s first feed him a lot.”

While eating, Yum Jung Ah said to Nam Joo Hyuk, “Why does it feel like we’re close? I think it’s because I watched him a lot on ‘Three Meals a Day.’ He likes ham.” Cutting to the chase, Yoon Se Ah explained, “They said that pushing down corn stalks are work. We used some money in advance by charging an amount for each corn stalk. We bought ham and stuff, so eat up first.” With a laugh, Nam Joo Hyuk replied, “It’s okay if you make me work a lot.”

Yum Jung Ah gave Nam Joo Hyuk a tour of the home and the farm. The actor helped out around the house by making a tent to keep out the rain and sun.

While taking a break, the cast got closer while listening to music and talking. Yoon Se Ah then mentioned seeing jump ropes. Yum Jung Ah had some difficulty jumping rope, and Nam Joo Hyuk showed off his double under jumps. He said, “My pants are falling!” but then tightened the waistband of his pants and gave it another go. 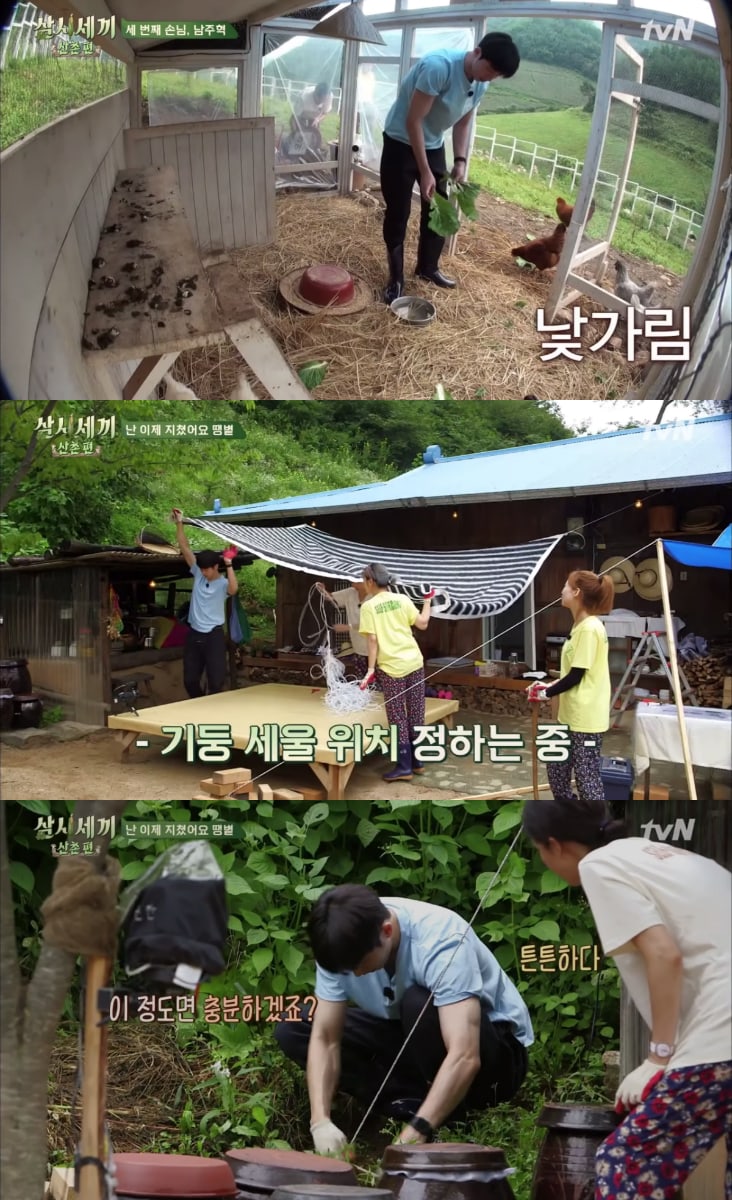 After a couple jumps, Nam Joo Hyuk handed the ropes to Yoon Se Ah. He said, “The rope is too short. I was able to do a lot before.” Yoon Se Ah then showed everyone how it’s done and even removed her mic to put her skills on display.

Nam Joo Hyuk began practicing and was on a roll when he suddenly stopped. “My pants went down!” said the actor, and he tightened his pants once more. The actresses burst into laughter and told him to tie the band around the back of his waist. He commented, “I feel like an athlete” and jokingly called Yum Jung Ah his coach as she helped to tie his pants.

Yoon Se Ah succeeded at doing 10 double under jumps, and everyone celebrated with cheers and hugs. Yum Jung Ah said, “Se Ah is amazing,” and Yoon Se Ah replied, “You definitely need money on the line.”