SECHSKIES’s Eun Ji Won and WINNER’s Song Mino and Kim Jin Woo recently talked about their affection for each other.

When asked to describe who WINNER is to him, Eun Ji Won said, “Rather than feeling like just juniors and seniors in the same industry, they’re really like younger brothers to me.” Song Mino also said, “I’m so close with Eun Ji Won and I really like him,” while Kim Jin Woo added, “Though I haven’t been close with him for that long, Eun Ji Won is always proactive in our interactions. That’s why I like him.”

Song Mino and Kim Jin Woo decided to prank Eun Ji Won by preparing an alarm clock that doesn’t shut off until it’s caught, and one that keeps ringing till you shoot the bullseye. Surprisingly, Eun Ji Won was able to turn both off with ease, and it was revealed that he had been watching the pair approach the house, pretending to be sleeping to trick them.

Eun Ji Won had the pair face off in a table tennis match, with the loser having to cook lunch while the winner cleaned the house, solving the issue of cooking and cleaning for him. Song Mino lost, and he tried to cook a meal for the first time. Unfortunately, his fried rice and ramen weren’t too great, as he put too much minced garlic in the ramen and made it difficult to eat. Eun Ji Won figured out that mixing in the ramen soup with the rice actually made for a delicious meal, and the trio were able to have a good lunch thanks to his quick thinking. 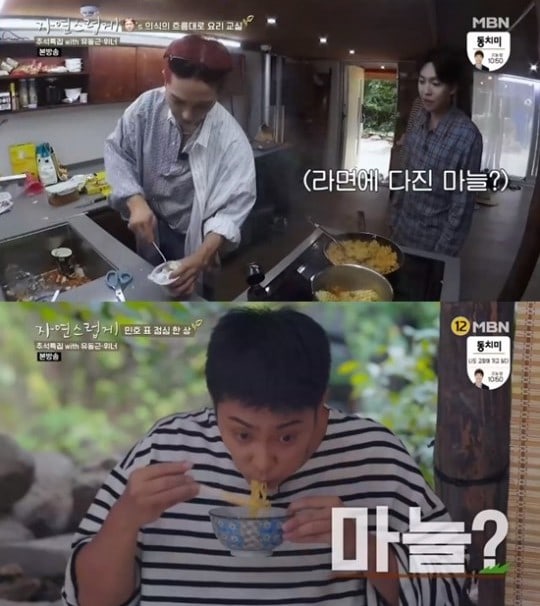 “Naturally” follows celebrities as they live in the countryside, pursuing small happinesses through a Hygge Life. The show airs every Saturday at 9:10 p.m. KST.