It’s difficult to wrap our heads around the fact that “Running Man” is celebrating it’s 10th anniversary this year! The show first aired on July 11, 2010, and since then, the members have provided us with plenty of laughs for the past 10 years. Yes, there were a few bumps in the way, and the show’s format has changed a few times, but we can’t deny that there’s something comforting in seeing the same set of familiar faces every Sunday night.

And while the current circumstances (like the members’ physical abilities) mean that “Running Man” might not be able to reproduce the more physically strenuous races from it’s earlier years, we also can’t help but fondly reminisce about some of the concepts/themes that made us fall in love with this show in the first place. Yes, we had series such as the Grasshopper Hunting and Yoomes Bond saga, but there were also some bigger thematic concepts that we rarely see on the show nowadays.

So in celebration of the show’s 10th anniversary, here are seven concepts that we’d love to hopefully revisit sometime down the road:

The ones where they crowned the strongest Running Man

This “Best of the best” type episodes also often (but not always) coincided with the superpower episodes and are naturally fan favorites because they’re just pure adrenaline and fun. There’s been seven in this series (episodes 42, 74, 130, 196, 257, 285, 336) with episodes 74 (the first superpowers race) and 130 (the reincarnation episode) being especially memorable. In fact, these two episodes are so beloved, they were chosen as the two races fans wanted to revisit the most and were thus brought back these past few weeks as part of their 10-year anniversary specials. And who can forget episode 285, where the usually tough Song Ji Hyo had a meltdown over mystery boxes? 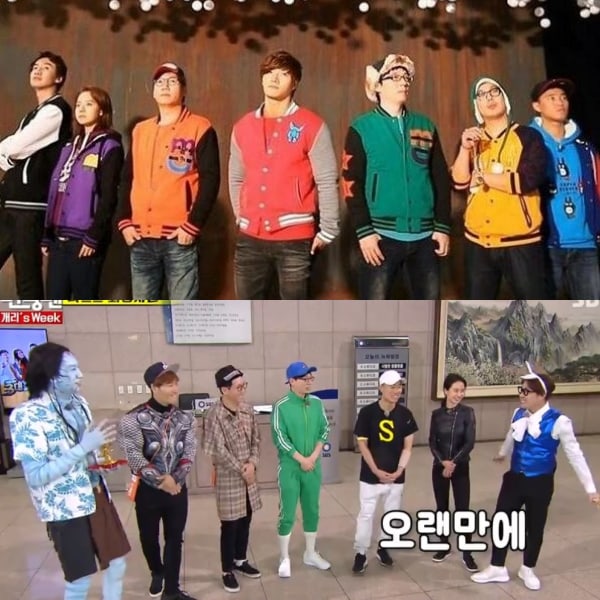 The ones with the big-name athletes

Another theme that would sometimes feature superpowers was the one with the legendary athletes because, well, the Running Man members obviously needed some help. It was hilarious watching major league baseball players Choo Shin Soo and Ryu Hyun Jin deal with whatever silliness the production team would throw at them.

We’ve also had Olympians Park Tae Hwan and Son Yeon Jae (episodes 109-110), who were adorable in their episodes, as well as MMA fighters Choo Sung Hoon and Lee Si Young (episode 131) who made the members shiver just from hearing their names. 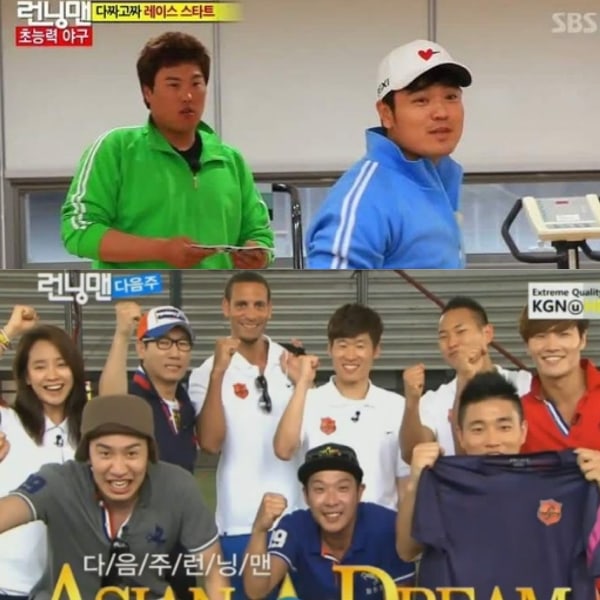 And let’s not forget the forever captain Park Ji Sung, who for a while, we would see yearly because the members would be invited to participate in the Asian Dream Cup. He was always such a great sport (pun intended), had great chemistry with the members, and often brought fun guests around too. Goodness, I miss me some Park Ji Sung!

The ones with all the idols

For this category, I’m specifically referring to ones like the Olympic-themed ones, where they had to face off against each other, rather than just one singular group appearing on the show. Episodes 104 and 129 featured many second-gen idols, such as CNBLUE’s Jung Yong Hwa, MBLAQ’s Lee Joon, T-ara’s Ham Eun Jung, and SHINee’s Minho teaming up and trying to beat the Running Man team in athletic events. Episode 195 switched things up a bit by forming team 2PM, team 2NE1, and team Mystic, then having Running Man members slotted into each team and having a three-way face off. 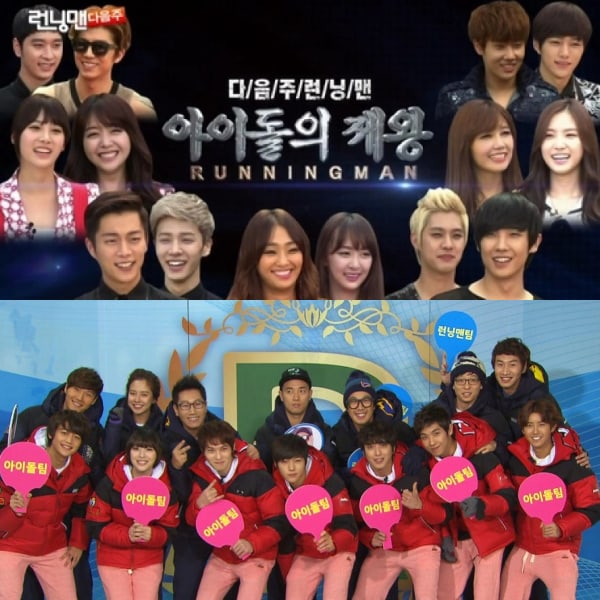 And the crème de la crème is non other than episode 162, where each member took a K-pop group (Girl’s Day! INFINITE! 2PM! BEAST! and more!) under their wings and gave us the ultimate idol battle. The opening alone, where they dance to each group’s song, is an insta-classic!

The ones where they go abroad

The episodes where they travel abroad are always all kinds of fun, be it the memorable guests or the exciting missions in an exotic location. The members first experienced their avid international fanbase first hand when they went to Thailand (episodes 50-51), then tackled the Macau tower in Macau (episode 133), and went mining for gold in Australia (episodes 188-189, 191), and so on. 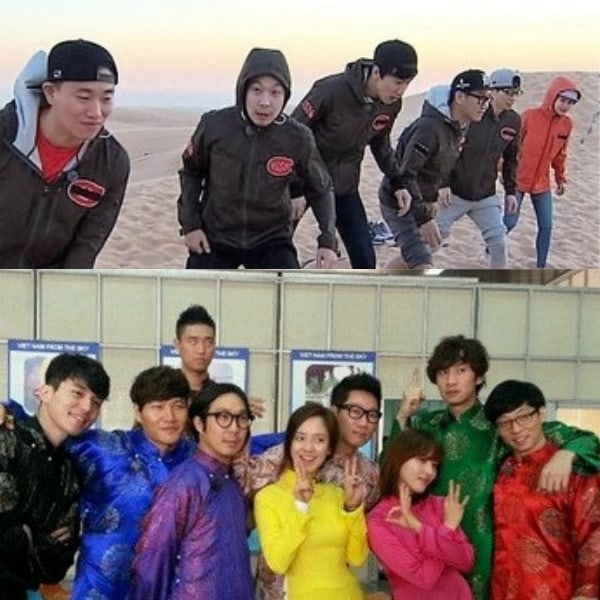 In more recent years, the members have also flown to various other countries as part of their long term projects, but with the destination varying between teams. With basically the whole world landlocked over the past few months, it’d be a nice treat to be able to see them go explore a new location in the future, hopefully with all the members together.

The ones with the big name actors

While the definition of “big name actors” may be subjective, we’re mostly referring to those that are household names not only in Korea, but also internationally. Think back to Running Man’s heyday, where they would invite hugely popular actors that would otherwise rarely appear in outdoor variety shows. We’d have megastars such as Gong Hyo Jin coupling up with Lee Kwang Soo (episode 108), Gong Yoo trying to escape from a jail cell (episode 175), Kim Hee Sun as one of the Goddesses (episode 100), and Son Ye Jin turning out to be HaHa’s first love (episode 70). And let’s not forget the calibers of Choi Ji Woo (episodes 126-127), Uhm Jung Hwa (episode 146), Han Ji Min (episodes 105-106), Jung Woo Sung (episodes 151-152), Hwang Jung Min (episode 132)… heck, even Jackie Chan (episode 135) made an appearance way back in 2015! 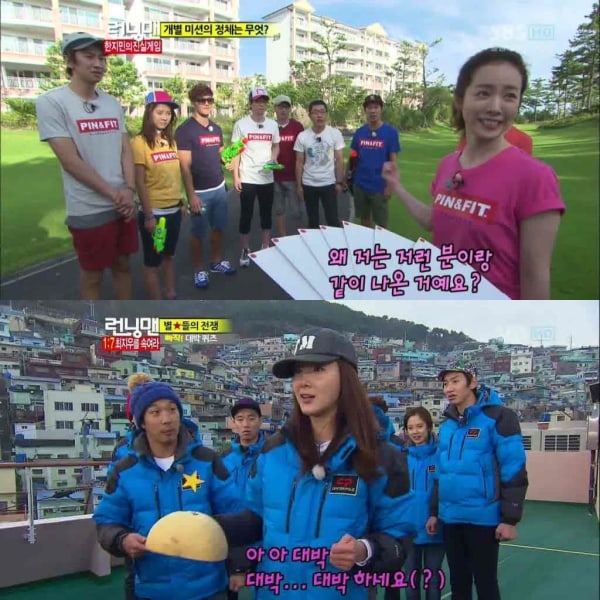 The ones with the high-concepts

In recent years, it appears as if certain PDs favor certain game concepts. For awhile, everything was roulette centered. It seemed like there wasn’t a week where we didn’t see that darn roulette (or the pirate game for that matter). Recently, we’ve seen a “betting”-streak, where members bet their R coins or whichever currency was in play that week. Naturally, age and fitness factors into how the game formats have changed over the years, but we can’t help but remember some of the races that were thrilling because of their unique concepts, and more often than not had a proper storyline weaving through the whole episode. The reincarnation episode mentioned earlier is an example, as is the one where Song Ji Hyo and Suzy turned out to be ghost sisters (episode 55), as well as the one where they could see into the future by using special ddakjis (folded paper tiles; episode 116). These concepts are so refreshingly distinctive, they’ve made long lasting impressions on us viewers. 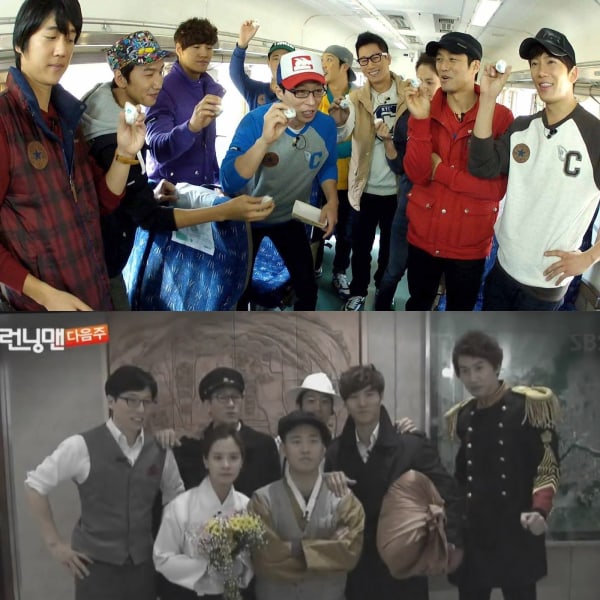 The ones with Running Man vs. Others

We’ve seen a few episodes with this theme, such as the two Shinhwa episodes (episodes 161, 236), the one against the “Angel Eyes” cast (episode 190), and a fan-favorite, the one against the production team (episode 178). The “RM vs. the PD team” episode in particular had camaraderie, laughs, dramatic tension, heart-warming moments, the birth of the “bosong song” (“soft and fluffy song”) and so many other memorable moments! With the Running Man members on a betrayal binge lately, we could certainly use a change of pace and have them remind us just how great their teamwork is! 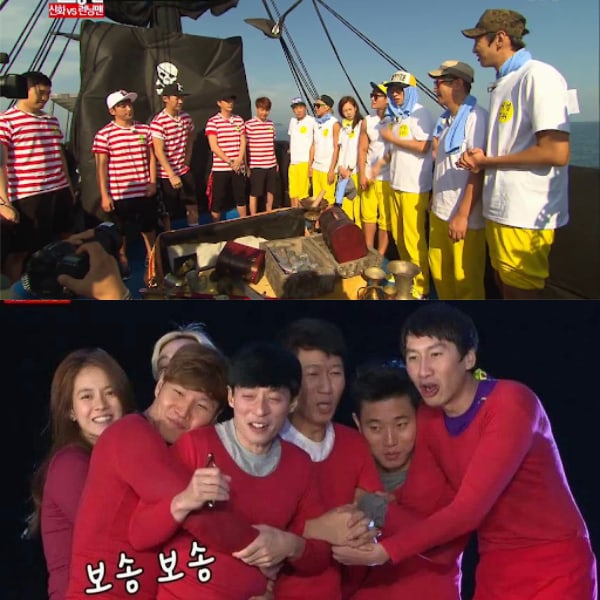 How long have you been watching “Running Man”? Which is your favorite episode (are you even able to choose)? And here’s a fun fact: The two guests from the first episode ever, Lee Hyori and Hwang Jung Eum, have only ever appeared on the show that one time! Say happy birthday to “Running Man” and share your fondness for the show below!

Belinda_C can’t even count the number of times she’s rewatched “Running Man.” It still entertaining after the nth rewatch! Talk SEVENTEEN‘s latest comeback, “Left and Right,” and Shinhwa with her on Twitter!