There are plenty of songs that draw inspiration from the animal kingdom, and animal metaphors are common in lyrics and symbolism. While many songs in K-pop draw on imagery of birds for freedom, or cats for sexiness, a few K-pop artists have taken the animal theme to the next level, daring to embrace their truly wild side. These artists not only draw inspiration from fearsome and awe-inspiring wild animals for lyrics and imagery, but also fully embody these creatures in the music videos and choreography for the songs. From lions to tigers, alligators to snakes, these 12 K-pop hits are the wildest of the wild!

After the tamer domesticity of their 2019 release “Cat & Dog,” TXT leveled up for the wilder “Puma.” The song’s Korean title translates to “Puma who escaped from the zoo,” and the song tells the story of a puma tasting freedom for the first time in its life. While the puma faces confusion as it avoids the humans who want to re-capture it, the big cat is finally able to feel alive. The TXT members really embrace their inner puma for this music video, almost to an uncanny effect! They break free of chains and cages, perch on cliffsides, and are impressively and eerily animalistic. Even the choreo (and cheetah-print outfits) are feline-inspired! 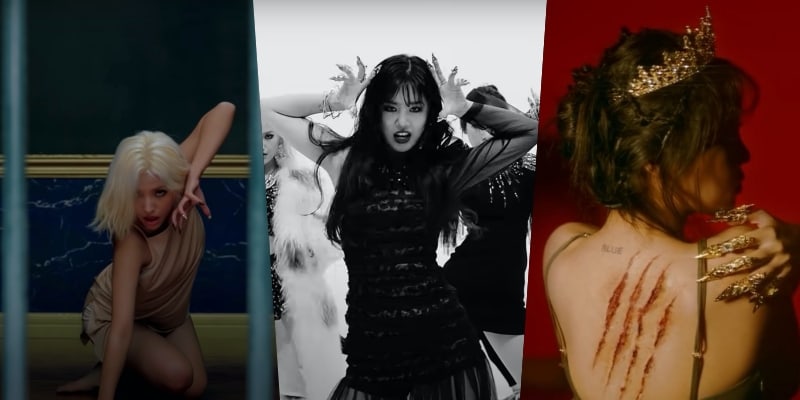 We may know the lion as the “king of the jungle,” but (G)I-DLE reinvented this big cat as a queen. The group unveiled “LION” for the “Queendom” finale, so it’s befitting that they embrace the theme of royalty — but in the accompanying MV, the ladies lean into the wild side of this concept: leader Soyeon crawls ferociously around a cage, Minnie sits atop a pedestal surrounded by felled arrows, and the members crown themselves with golden claw-tipped fingers. Surrounded by female backup dancers in feline makeup, the group ascends a grand staircase to stand by a massive lion statue, reaffirming their royalty. 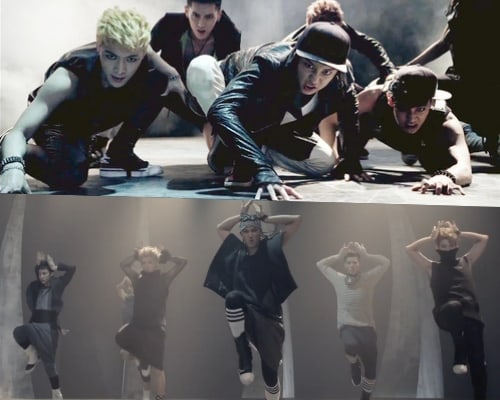 Who could forget this classic EXO hit? In “Wolf,” the guys represent wild animals who can’t be tamed… until they fall for a beautiful girl. They try to convince themselves to fight off their newfound feelings (just bite her and shake it off!) but it’s too late: these wolves have been domesticated by love. EXO’s athleticism really shines through in the “Wolf” music video, with the guys leaping and bounding around with wolf-like acrobatics. Complete with a canine-inspired choreo (remember the famous wolf-ear pose?) and howls, this MV is worth watching again and again!

PENTAGON debuted with an animal-themed bop back in 2016: in “Gorilla,” the guys describe being so wildly in love that they want to pound on their chests “like a gorilla.” While the music video does not involve actual chest-pounding (probably for the best), the group pulled off this concept in style with a more subtle gorilla-like choreo that accentuates powerful arm movements. 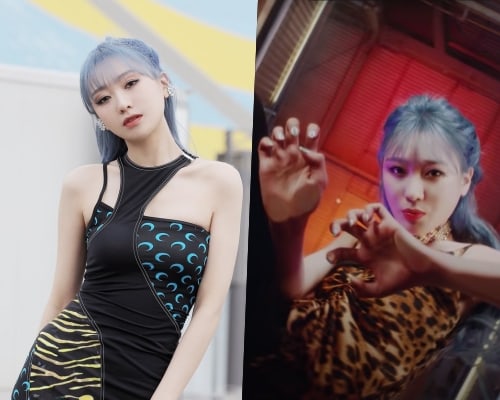 Lovelyz member Sujeong made her solo debut with “Tiger Eyes,” which compares a game of romance to the lithe movements of a tiger, silently stalking prey until it’s too late. Tiger eyes are gorgeous and mesmerizing, but will only be dangerous in the end! Sujeong accentuates this simmering, seductive track with various animal-print looks in the MV: 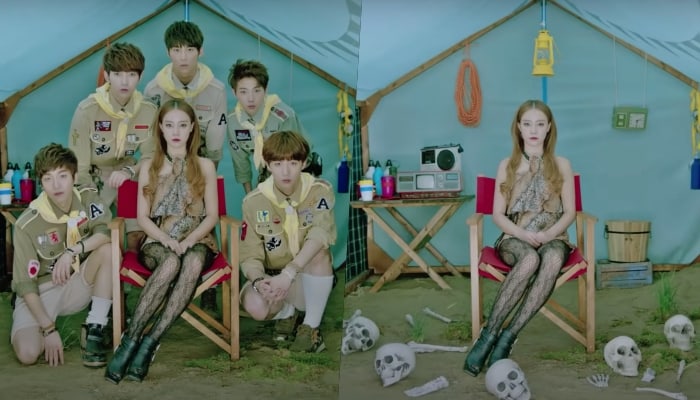 This A-JAX oldie-but-goodie has undoubtedly one of the funniest music videos in K-pop. The song tells the story of a girl who is as cold and standoffish as a snake and won’t let her boyfriend get close to her. In the slightly raunchy MV, the guys find a sickly snake-woman in the woods, attempt to bring her back to life, and then try to win her over, only to start disappearing one by one…. Former Rainbow member Go Woori is hilarious in this serpentine role, so check it out!

Brown Eyed Girls’ Ga In offers a completely different take on a snake in the artful “Paradise Lost.” The song reimagines the story of Adam and Eve in the Garden of Eden, and is told from the perspective of Eve — however, in Ga In’s version, Eve wasn’t tempted by a snake: the snake was actually a part of Eve herself. This empowering interpretation means that Eve chose her own destiny, and Ga In explores this metaphor by transforming into a snake in the music video, complete with a totally mesmerizing, serpentine floor dance routine.

BTS is not the first K-pop group to explore the black swan metaphor (that honor belongs to Rainbow with their 2015 “Black Swan“), but the boys’ artistic take on the theme was breathtakingly gorgeous. BTS released an art film for the song, showcasing a group of dancers performing choreography laden with swan imagery. The group then followed up with another music video featuring the members, confronting the fear presented in the song’s lyrics that a black swan exists within them: that some day they will tire of the music that is so central to who they are. 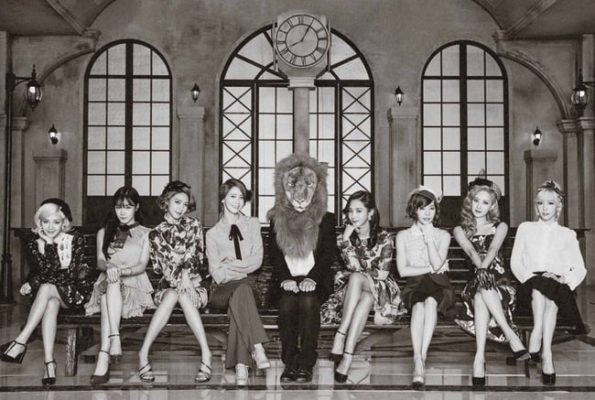 This Girls’ Generation hit paints the ladies’ love interest as a lion, who after capturing their hearts has begun to move on to his next prey — while he’s a slave to his animal instincts, the members wish they could tame his lion heart. The retro MV follows this tale as the girls first fawn over a literal lion man, before hilariously telling him off in the end once they realize he’s been flirting with all of them. 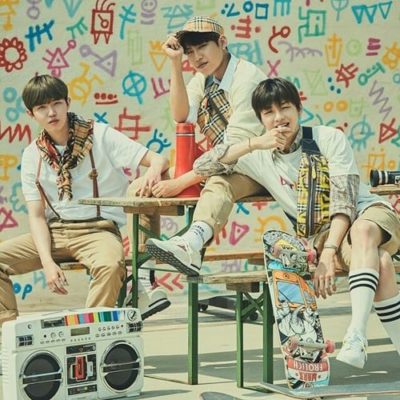 Like the song’s namesake, “Kangaroo” is all about jumping around and having fun in the summertime! Block B’s Zico helped produce this track for Wanna One’s three-member subunit Triple Position, and the boys really embrace the free-spirited energy of a kangaroo with the mischievous playfulness of this song. The choreography features plenty of hopping moves to match! 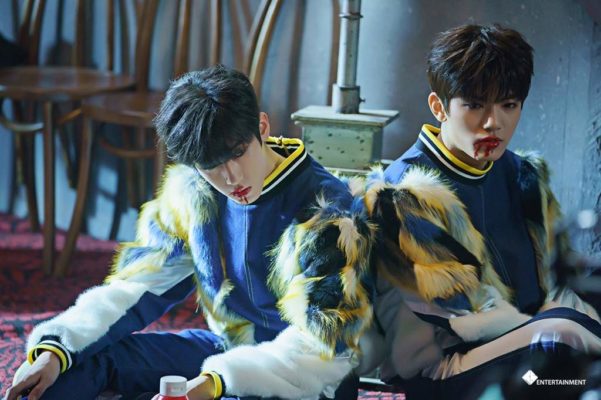 TRCNG are more protective than predatory in “Wolf Baby,” singing of their instincts to prevent the other beasts of the forest from harming the one they love. With howls, wolfish choreography, and fur-accented costumes, this MV is part Halloween, part hilarity, as the boys appear surprised by their canine nature and tentatively explore their inner wolf! 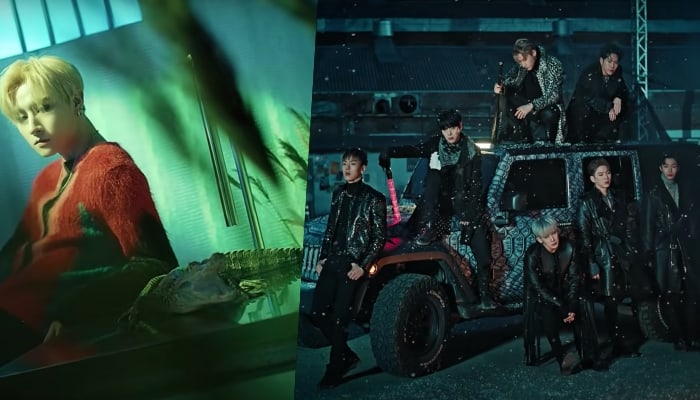 There’s no better way to finish this list off than with this high-energy hit from MONSTA X. The guys play a dangerous game of seduction in “Alligator,” describing a relationship in which they feel as though they are being pulled into a swamp and held underwater. Fittingly, the music video features a swamp set which fills with water to make for a dramatic dance sequence by the end of the song. Also, peep that alligator-scaled car in the MV!

We don’t discriminate against extinct animals! Akdong Musician embraces the impossible in “Dinosaur,” reflecting on a childhood fear of dinosaurs. In the music video, the brother-sister pair revisits this theme from their younger days, but this time face the feared animals that used to appear in their nightmares. Now, the two search for dinosaurs in a free-wheeling, imaginative adventure through another world.

Hey Soompiers, which of these wild concepts is your favorite? Which group do you think does the best job portraying their inner animals? Let us know in the comments!