In these past two weeks of “I-LAND”, we finally receive confirmation that there is indeed a part one and part two to the show, and the “12” they constantly mention is only the number of trainees that will make it in to part two. So, just who are the 12 I-Landers that successfully finish part one? Well, we won’t know that until episode 6.

Why must you do this to us, show??

In the meantime, let’s take a look at what happened in episodes 4 and 5, including the third test, some shuffling of trainees, and an important life lesson we could all learn.

Warning: Major spoilers ahead. Like, seriously! There are results and everything!

The Grounders bring a truckload of attitude and spunk to their performance and look like a hot dance crew. Their all-black ensemble also looks sleeker than the more “flowery” styling of the I-Landers. With everyone wearing the same thing, it’s actually easier to spot when someone is not in sync with the others. However, the Grounders bring consistent energy and diverse expressions to their performance, and they really feel like one team, fulfilling the test of “teamwork.”

The post-Test 2 voting (a.k.a the accidental kill)

Unlike the first test, the top six scorers for the “Fire” performance are revealed: K with the highest of 88 (also winning himself the elimination exemption coupon), followed by Heeseung (83), Sunghoon (80), Ta-ki (75), Sunoo (71), and EJ (70). They earn an 80 for their teamwork score, giving them an average of 78, which is a significant improvement from before. This also means they only need to vote out four people.

There were comments (from viewers) before about how disappointing it was that high scorers like Daniel were still voted out in the previous test, so by revealing the scores this time round, hopefully this could be avoided. (Spoiler alert: Nope).

After consideration and appeals all around, the I-Landers eventually vote out Yoonwon (11 votes), Taeyong (10 votes), Sunoo (8 votes), and Jungwon (5 votes). K, surprised that Jungwon was voted out, chooses to use his elimination exemption coupon to save him. Thus, the next person with the most votes would then replace Jungwon and leave I-LAND in his stead. 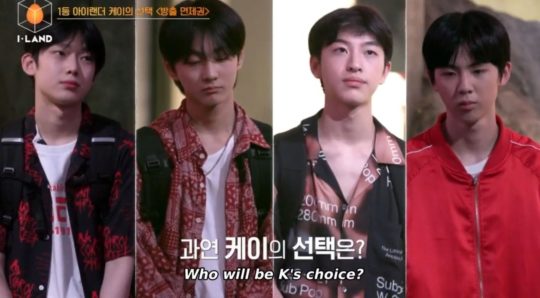 And the person next in line is… Ta-ki. Ta-ki, whom K made very clear he would save right away if he was voted out. Ta-ki, whom K mentions again and again about how much he respects his hardworking attitude. Ta-ki, K’s face-washing buddy. Realizing he plunged the metaphorical knife into Ta-ki himself, K immediately breaks out in tears.

Meanwhile, the four Grounders moving up are Youngbin, Kyungmin, Jay, and Jake.

The third test pits the I-Landers against the Grounders in a head-to-head competition. If the I-Landers win, all 12 would keep their spots, whereas if the Grounders win, six I-Landers would be voted out. Interestingly though, not everyone gets a chance to perform. Instead, each side chooses five representatives (thus the name), two in charge of vocals and three in charge of dance. So in essence, the fate of the whole I-Land/Ground crew rests solely on their respective five representatives. No pressure.

The non-representatives showing love and support in the form of a snack delivery.

Given that the two vocalists have to both sing and dance, it’s nice that the dance unit has to choreograph a portion of their dance themselves. This gives them a chance to do a little more, as well as show more depth.

A lesson in always being prepared (a.k.a Jay, the man who sees the future) 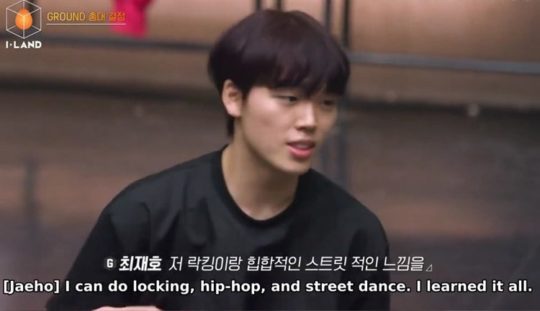 At Ground, Ni-ki notices that Jaeho doesn’t quite keep up with the other two, so he tries to persuade Hanbin (their fellow “Jopping” member) to switch in. Hanbin is reluctant, saying he’s not confident and that his heart would break for Jaeho and all the hardwork he’s put in. The Grounders have a vote anyway and decide to swap Hanbin in.

Unfortunately, the swap happens right before the mid-point check, and Hanbin doesn’t have enough time to memorize all the choreography. This obviously doesn’t turn out so well, and it’s all pretty hard to watch. And this is why you should always be prepared! You never know when chances will fall in your lap, and you can only take advantage of these chances if you’re prepared!

Instead, be like Daniel. Daniel, who semi-lost his voice after performing “Fire” and thus couldn’t try out for the vocal part this time around. Daniel, who practiced for the song anyway, and practiced so much that his lyrics sheet was all crinkly. This Daniel was given the chance to sing during the mid-point check, and the Producers and Directors thought his voice and tone fit better than Sungchul’s (who sounded hesitant and unstable during his turn). This Daniel eventually switched in for Sungchul. Be like Daniel. 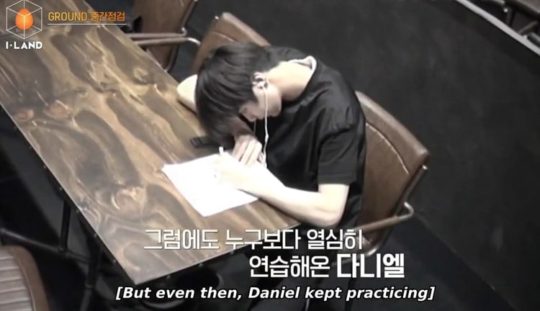 Or, be like Sunghoon. Sunghoon didn’t jump at the chance to be the dance representative, but he diligently practiced by the side anyway. Sunghoon, whose figure-skating experience allowed him to pull off the more acrobatic moves in the choreography that Jay couldn’t quite nail. This Sunghoon also eventually traded places with Jay. Be like Sunghoon.

Or, you know, just don’t say ominous things like this: 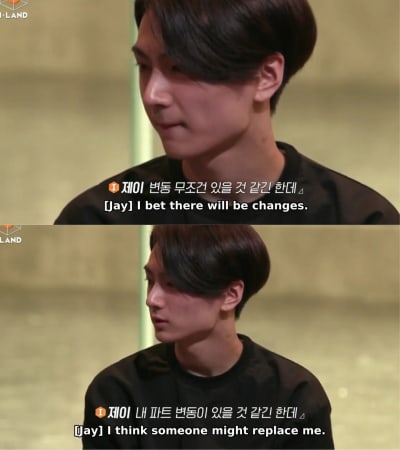 At least knock on some wood, Jay!

Now before any Jay fans come at me, please know I’m only playfully ribbing on him. In fact, with each passing week, Jay’s EQ becomes more and more inspiring. Sure, he wears his feelings on his sleeve, but he’s able to shrug them off quickly enough and push through. In his confessional, he admits that he’s naturally disappointed because he’s human, but he also knows that making a fuss about it won’t get him his spot back. Then we see him spending time teaching Sunghoon the details of the dance, and he even gives Sunghoon shoulder massages when he’s tired. We also see a whole edit of Jay teaching trainee after trainee after trainee in episode 5, at the expense of his own practice time. This is one pretty giving kid, so be like Jay! 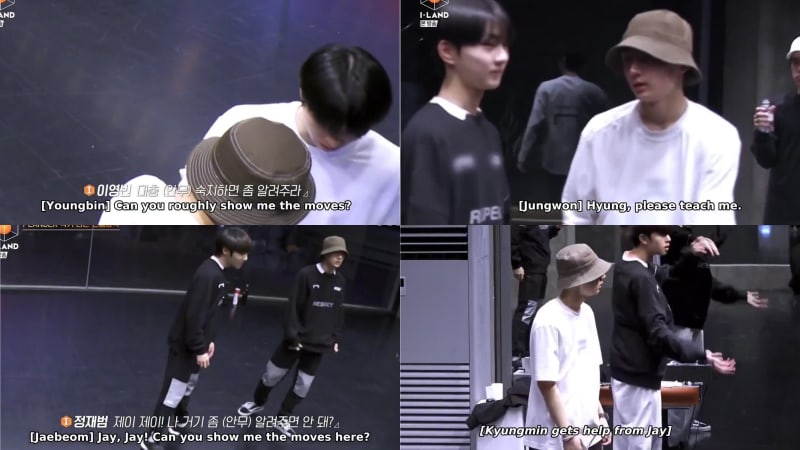 Rain is everywhere lately, doing collaborations, becoming memes, doing variety shows… everywhere! But leave it to a bunch of kids to keep the legend grounded.

I-Landers Geonu and Heeseung perform BTS‘s “Butterfly,” turning in a solid and stable performance without any faults (other than having a little nerves). Personally, I am more drawn to Daniel and Sunoo’s performance of BTS’ “Save Me.” Don’t get me wrong. Geonu and Heeseung’s performance is good, with striking beautiful dance shapes and strong vocals, but it also feels safe and expected; whereas Daniel and Sunoo’s rendition feels more layered and vulnerable in a way. Also, Daniel’s eyes-half-opened look at the end? Yowza. Just imagine when this boy grows up. (He’s a ’06-liner, maknae of the bunch)! That being said, I do think their young, boyish looks slightly lessened the impact of the overall concept. 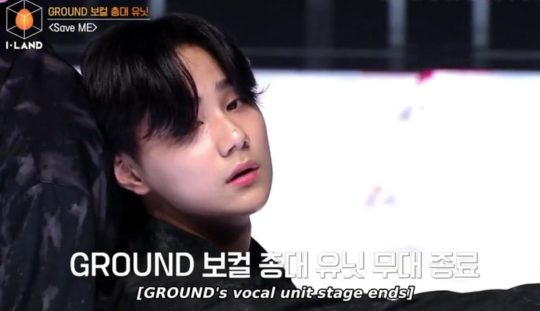 In the end, the Producers and Directors scored I-Landers with an 81 and Grounders with a 74. 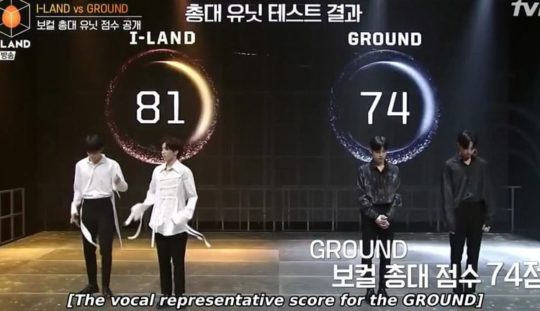 Then comes the dance portion. Each team’s dance has three sections, consisting of different genres as well as a self-choreographed portion. The I-Landers’ choreography (by K) has more personality and swagger to it, and their performance is tighter in general, constantly keeping the tension up and switching moods according to the styles of the dance. As for the Grounders, the Producers and Directors give special kudos to Nicholas for understanding and catching the points of each dance well (as well as having a super intense glare).

Oddly, the show decided to show a final score right away instead of the dance score then the overall score, which would have made it more dramatic. But anyways, I-Landers score 154 (73 for dance) and Grounders score 139 (65 for dance). *Shakes fist at show for making me do math* 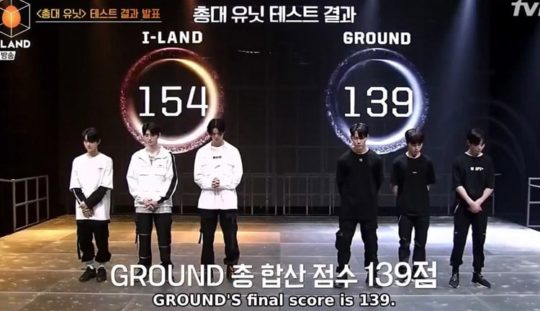 Neither did I! Good thing K saved Jungwon, yes?

With the I-Landers winning, they maintain the status quo, and the five Ground representatives walk back to Ground dejectedly, in the rain no less! Way to literally rain on their parade, universe!

The fourth test: The Final 12

And just like that, we reach the final test of part one. Both I-Landers and Grounders will perform an original song titled “I&credible.” Within the I-Landers, six will be voted out (three by Producers and Directors, three by I-Landers themselves) and sent to Ground. Then, the 17 Grounders will need to wait for Global votes (i.e. viewer votes) to save six of them. The saved six will then reunite with the I-LAND six, and together, they will move on into part two.

This fourth test switches things up yet again and removes the original “collective destiny” system, instead focusing more on individual abilities. This causes most trainees to focus largely on themselves — which is completely understandable — but also raises some issues over at Ground. No one wants to step up to be the leader, and when they nominate Ni-ki, he’s reluctant to do it because a) he doesn’t want to sacrifice his own time and b) he didn’t have the best experience leading in the previous tests. However, after a very stern talking-to from a frustrated Rain, Ni-ki steps up and guides the rest of the Grounders. 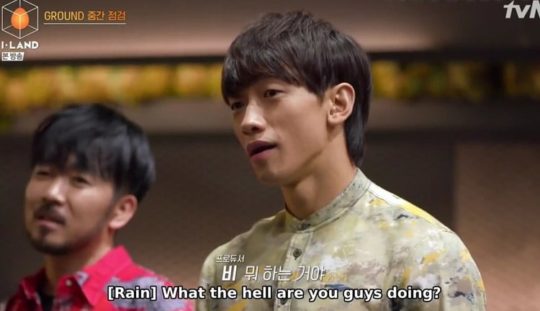 Over on the I-LAND side, we see that Kyungmin has taken over for Jay as the resilient hand-raiser. He continuously applies for parts, but gets passed over again and again, ending up with part 12. (I hope they didn’t go in sequence from part 1 to part 12, otherwise that would just be completely demoralizing). However, Kyungmin vows to make the most of his dance parts (he only has one line to sing) and make as big of an impact as he can with them. He even says he’s aiming for first place, stating, “I know it sounds impossible, but we need to try for the impossible.” 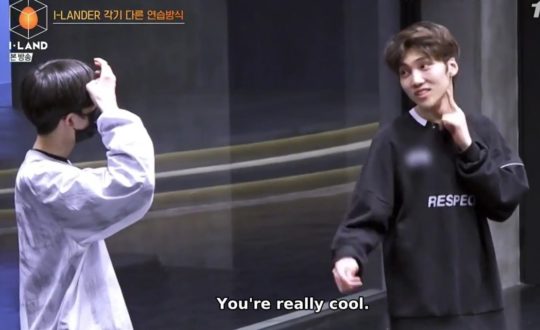 Jaebeom is totally impressed with Kyungmin, as am I!

Vote for your favorite trainees here, and watch the latest episode of “I-LAND” on Viki below:

Which trainee left the biggest impression on you in these two episodes? And for the third test, which unit did you think performed better? Let us know your thoughts on episodes 4 and 5 below!

Belinda_C wonders what the final debut number is. Talk SEVENTEEN and Shinhwa with her on Twitter!