As we get ready to head into part two of “I-LAND,” we finish off part one with dual performances of the original song “I&credible,” six vote offs, plenty of tears, as well as a paranormal sighting courtesy of Seon.

Here’s what went down in episode 6 (and the following special episode):

Warning: Major spoilers ahead. Like, seriously! There are results and everything!

Right off the bat, the show reveals the ongoing voting situation. Fans from over 170 countries participated in the voting, with the most votes coming from (in order) Indonesia, Japan, the Philippines, the United States, and South Korea.

As for individual trainees, Sunoo received the most votes from South Korea, Daniel from the United States, Sunghoon from China, and Jake from Indonesia. Heeseung is the most voted for trainee in India, whereas Ni-ki and Hanbin get all the love from their respective birth countries Japan and Vietnam. Oddly, we don’t hear who gets the most votes from Philippines, the country with the third most voters. 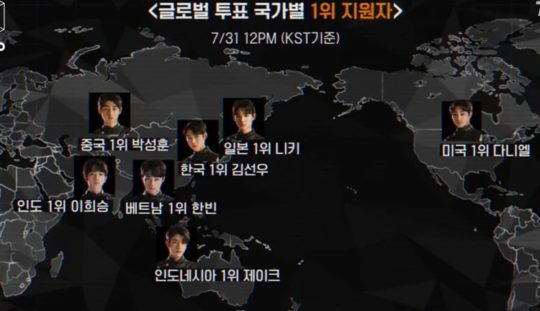 These statistics track with Viki’s own data, which has Sunoo, Heeseung, Daniel, Jake, and Sunghoon as the trainees with the most number of followers (as of August 10).

During the mid-point check for the fourth test, Zico and performance director Doobu feel that Jungwon lacks the charisma and performance depth to fully bring his part to life. (Jungwon had taken part five, the part with a lot of solo choreography). This naturally affects Jungwon, and while he initially intended to hold on to the part, he eventually switches with Heeseung after much deliberation.

EJ is facing a little crisis of his own. His legs have been hurting from the intense practice, but he knows he can’t afford to ease up. The feedback EJ always hears is that he has a lot of potential (in fact, that’s exactly what the Producers and Directors said after seeing his entrance test), but the comments never evolved, which indicates his lack of evolution too. It’s actually quite upsetting in a way, for what initially started out as encouraging words to eventually turn into words that cut the deepest.

Oh, and apparently Seon sees a ghost or something, which then spooks some of the I-Landers, and we get a hilarious edit of the boys clinging to each other out of fear.

The Producers and Directors (henceforth “panel”) agree that the I-Landers all perform above expectations for this fourth and final test. Their individual skills generally improved, and the boys turned in a solid performance.

Here comes the surprising part. K and Geonu respectively rank 11th and 12th place, with 61 and 60 each. The panel is disappointed with K’s overall performance, saying that both his falsettos and natural voice don’t project well. They also mention how he often isn’t at the top of his condition during performance days, which is concerning. (K mentions his sore throat prior to this test). As for Geonu, the panels feel he underperformed and that his facial expressions don’t reflect the song. And as much as it pains me to say so, I do agree with their evaluation that Geonu hasn’t exactly been on an upward path. It’s disappointing that he scored the lowest, but I understand it probably comes from expecting more from him (and K).

The final vote outs (of Part 1) 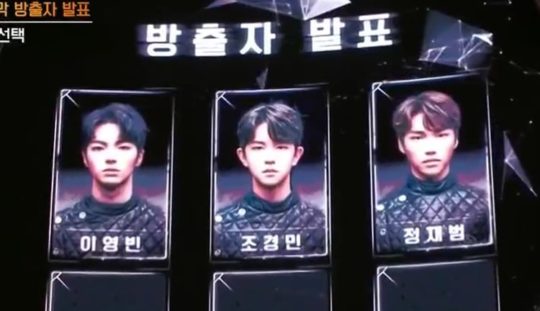 Then the panel votes from the remaining nine I-Landers. Each of them select their own three vote outs, looking back at their whole journey in “I-LAND” so far before making their decision. They pretty much agree on Seon and EJ for the first two spots, saying that Seon hasn’t shown as much as his long training period would suggest and that EJ hasn’t capitalized on his potential. The third spot garners more debate, with the panel pitching names such as Geonu, Jake, and Sunghoon. Eventually, the axe falls, and it falls on Geonu.

Cue a bucketload of crying from the surviving I-Landers. Honestly, other than Seon who starts crying the moment his name is called, it’s the remaining I-Landers who are doing most of the crying (I think Heeseung was full-on bawling at one point). And we also get this amazing little moment from Jay:

The Final Six (a.k.a someone save the Grounders)

The six vote-outs make their way to Ground, and it’s the first time making that journey for Seon and Geonu. The Grounders give the newbies warm hugs and welcomes, before hilariously wondering whether they should be that welcoming.

In his confessional, Seon states that he feels unwelcomed and left out as there are plenty of misunderstanding about him from the Ground side. This is quite an interesting piece of information, as I don’t remember any context for this at all, and he always seemed to be in the center of things back at I-Land. So when and how did these misunderstandings arise? Oh to be a fly on the wall!

All 16 Grounders now have three days to redistribute their parts for their “I&credible” performance, and a few of them try out for part 1, which ultimately goes to Geonu after giving an all-out try-out.

The performance itself is, dare I say, more dynamic than the I-Landers’. There’s a lot of moving components which amps up the interest factor, and I especially enjoyed how Geonu’s part leads from one section to another. There’s a lot of people on stage, and some trainee’s parts are really really short, but they give it their all, knowing that this really is their last chance to make an impression on global voters.

After all is said and done and the show tells us to get voting, we learn that Yoonwon has pulled out from the show to recover from the pain in his legs. 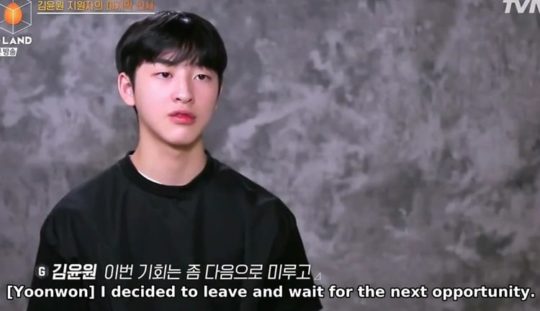 The episode that aired on August 7 was a “special episode,” which is actually just another term for clip show. The show invited Kwanghee, Apink’s Namjoo, and MOMOLAND’s JooE to host the episode, with performance director Doobu and vocal trainer Kim Sung Eun rounding out the five-member panel. 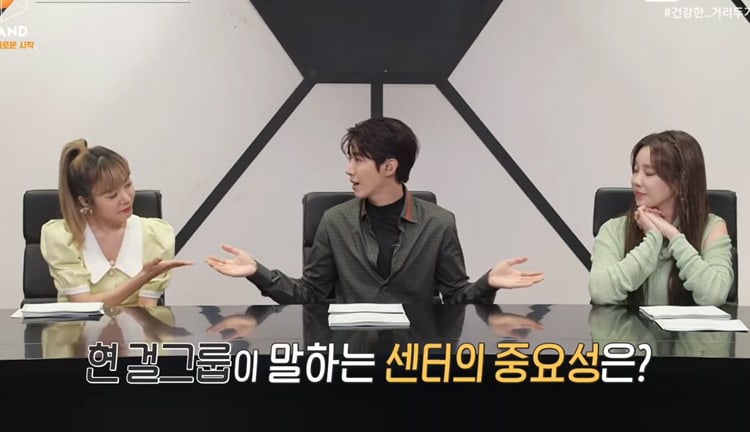 Speaking of Kim Sung Eun, it sounds like she’s been with the trainees this whole time, so I’m curious why we’ve never seen her before at all? Or any scenes of the trainees getting lessons for that matter? 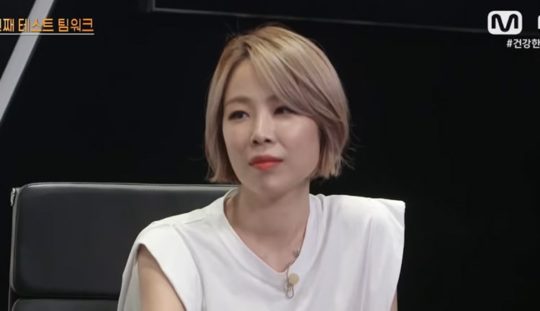 The clip show basically covers moments from each test, before spending some time re-introducing each of the 23 trainees. (As far as I know, there is no new footage). Doobu reminds everyone that Jungwon ranked first in both the first and fourth test, making him the hidden ace. Jungwon has a quieter personality than some of the other trainees, so it seems like we often overlook him (calling back to Rain’s “How come I didn’t know you could dance so well?”), but his talent speaks volumes. We also learn that four of the boys sadly never made it out of Ground: Jaeho, Sungchul, Jimin, and Hanbin. Speaking of overlooked boys, I kind of feel bad for Jimin. He barely got any airtime and honestly, I can’t even put a face to the name. 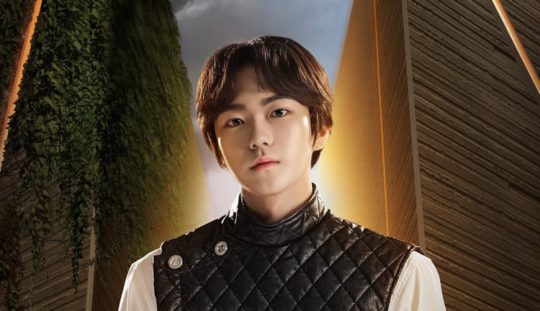 Hi Jimin! I wish I’d gotten to know you more!

The panel then gives us a few spoilers as to what we can expect from part two of the show. Basically, there will be more performances (yay!), global fans will play a bigger role, and… BTS.

Watch the latest episode of “I-LAND” on Viki below:

Are your favorites safe? And out of the six vote offs, who are you the most bummed about? Let us know in the comments below!

Belinda_C is most bummed about Geonu. He’d make a good main vocalist. Talk SEVENTEEN and Shinhwa with her on Twitter!