The currently airing “Go Ahead” is the it drama that is taking social media by storm right now. This Chinese drama is centered around a little family unit of five, who aren’t all necessarily blood related, but all hold each other dear to their hearts. It is a story (at least in the earlier parts) of familial love, struggles and hardships, and compromises. And especially in the case of the three children, it is a story of growing up, experiencing the injustices of life, and shouldering on.

Many a times, the relationships among this little family unit — single dads Li Hai Chao (Tu Song Yan) and Ling He Ping (Zhang Xi Lin), and children Ling Xiao (Song Wei Long), He Zi Qiu (Steven Zhang), and Li Jian Jian (Tan Song Yun) — are so sweet and heartwarming, you wished you were part of it. I mean, who wouldn’t want two super cute brothers who doted on you, amirite? And it’s their bonds with each other that makes the earlier episodes of the drama so addictive, and you can’t help but want to see more.

So, here are some of those moments from those earlier episodes that made us reach for the tissues:

Warning: Spoilers for episodes 1 to 12.

When Ling He Ping, his wife Chen Ting (Yang Tong Shu), and their young son Ling Xiao first move to the apartment above Li Jian Jian’s, she takes an immediate liking to him. She’s always wanted a big brother, so she constantly showers him with attention, but Ling Xiao is aloof and keeps his distance. However one day, after learning that Lee Jian Jian and He Zi Qiu have gotten hurt, he knocks on their door, passes them a bag of medication, and walks away without a word. And that’s when we know the Li family’s warmth has warmed Ling Xiao up.

And just like how the the Li family shows Ling Xiao affection, he too looks after little Zi Qiu when he first joins their little family. Li Jian Jian is initially unwelcoming of Zi Qiu, feeling like he’s stealing her dad, and so she often bullies him. But Ling Xiao makes sure he feels included and welcomed, and their brotherly bond only grows from there.

Li Hai Chao and He Zi Qiu’s mother, He Mei (Luna Yuan), are set up on an arranged date. After meeting a few times, He Mei’s mother suddenly falls ill, so she leaves town to go and take care of her. She borrows some money from Hai Chao to help with the medical bills while also leaving Zi Qiu with him, promising that she’ll be back soon. Zi Qiu misunderstands the situation, thinking that the adults are getting married, and blurts out “Dad.” This both amuses and touches Hai Chao, and from then on, he takes Zi Qiu in and raises him like his own son.

When we learn of how broken Ling Xiao’s family is

The Ling family has a tragic backstory that leads to their eventual fracture. Years ago, while the parents were both out and a young Ling Xiao is looking after his three-year-old sister, he feeds her some of her favorite walnuts (as he’s done many times before). Horrifyingly, the sister chokes on the walnuts. Ling Xiao is unable to go out and get help because the door is locked from the outside, and his screams for help go unheard. The sister loses consciousness in front of him, and by the time Chen Ting arrives home from her Mahjong game, she’s already dead. This loss drives a deep wedge in the family, with them subconsciously blaming each other for the death and not taking the time to heal from it. It’s a painful and harrowing accident that continues to torment those alive, but it truly is just that, an accident.

When Ling Xiao’s mother walks away… and comes back

Family life gets to be too much for Chen Ting, and so she divorces Ling He Ping. When she packs up and leaves, an ecstatic Jian Jian asks if she can “have” Ling Xiao, and Chen Ting agrees. Her innocent joy at having gained a brother is heavily juxtaposed against Ling Xiao’s brokenheartedness, and it’s a difficult scene to watch.

Years later, after the siblings grow up, Ling Xiao’s mother suddenly comes back. By then she’s remarried and living in Singapore and has a young daughter with her new husband. Wanting to reconnect with Ling Xiao, she apologizes and explains that she wasn’t in the right state of mind to look after him then, but he’s not having any of it. He walks away from her, and Jian Jian feels so sad for him, she can’t help but adorably cling to him to show him her support.

When Li Hai Chao lets his emotions out

In one of the most emotional scenes in the earlier episodes, we see Li Hai Chao pouring out his emotions thanks to a little alcohol. He loves Zi Qiu and Ling Xiao like his own sons, and it hurts him when they’re hurting. He knows Ling Xiao has been losing sleep over his mother who reappeared, and he can’t bear to hear others reminding him that Zi Qiu is only a foster son, and so Zi Qiu should behave and be filial to repay him. In his mind, his sons are the best, and they don’t deserve hearing these harsh words from others.

The relationship between Hai Chao and Zi Qiu is a particularly special one. They’re both so much alike in the sense that they place so much weight on familial bonds, and when they love, they love with all their heart.

After Zi Qiu’s birth father, Zhao Hua Guang, appears and wants to reclaim him, Zi Qiu makes it very clear that he wants nothing from him. But he’s worried that Zhao Hua Guang, who happens to have become quite rich over the years, would complicate their simple and happy lives. Father and son sit down and have a heart to heart, and Hai Chao makes it clear that he’s very grateful that Zi Qiu came into their lives so many years ago, and that no matter what happens, he’ll always be there for him. This promise calms Zi Qiu’s unsettled heart, and he returns the sentiments and assures Hai Chao he’ll be there for him too.

Though the parent-child and sibling relationships take center stage in “Go Ahead,” the bond between Hai Chao and He Ping is not one to be dismissed. With both being single dads with young children, they band together to form their own little support system. He Ping is like the stoic dad who might be unable to vocalize his emotions, but readily shoulders the responsibilities and always gets things done. On the other hand, Hai Chao is like the nagging mom who worries about whether the children have enough food to eat or whether they’re in a bad place emotionally. 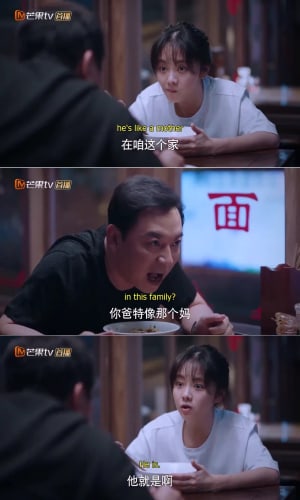 “Don’t you think your dad is like the mom in this family?” “He is!”

When Ling Xiao has to grow up

When the siblings are talking about birthdays and growing up, Ling Xiao drops some wisdom on Jian Jian, telling her that becoming legal age-wise doesn’t necessarily mean you’ve matured. Instead, truly “growing up” happens in a moment, and sadly, for Ling Xiao, that moment was about to happen.

After learning that Chen Ting — the mother who abandoned him years ago — had gotten into a severe car accident, he leaves for Singapore to be by her side. And even though Chen Ting’s surgery is a success, she still requires a lot of physiotherapy down the road, and someone would also need to take care of Xiao Cheng Zi, the little sister. All of this burden falls on Ling Xiao, but he valiantly takes it on out of a sense of duty and moves to Singapore, leaving his little family behind.

When Zi Qiu’s birth father, Zhao Hua Guang, first approaches him and wants to “reclaim” him, Zi Qiu could not stay further away from him. But after Hua Guang starts causing trouble for those around him, Zi Qiu has no choice but to agree to his terms — to further his studies in the United Kingdom. Hua Guang similarly digs his claws into Hai Chao, bullying him into believing that he and his low income status would be unable to provide Zi Qiu with the best and that going overseas would be in Zi Qiu’s best interest. Hai Chao understands there’s some truth to this and thus gathers up the courage to convince Zi Qiu to leave with Hua Guang. And just as Hai Chao is about to broach the subject, Zi Qiu himself brings up the idea. There’s a little part of them that’s hoping the other would object to the idea, so when they realize they’ve both come to the same conclusion, they can’t help but tear up at the finality of it all.

When Ling Xiao and He Zi Qiu fight

The relationship between Ling Xiao and Zi Qiu are like true brothers, messing with each other, but always still having each other’s back. So when Ling Xiao tells Zi Qiu of his plans to move to Singapore to look after his mother and sister and leaves Jian Jian in his care, Zi Qiu bristles up in guilt and anger. Turns out, Zi Qiu is leaving for the United Kingdom soon, which means both sons are now abandoning their families for those who abandoned them in the first place. Their rage stems from a place of guilt and feeling sorry to those they’re leaving behind. We’re honestly as sad as Jian Jian to see these two brothers angry enough to be fighting each other.

Suddenly finding out that both her beloved brothers will be leaving the country instead of going to Beijing to further their studies — and are going to return to their birth families no less — Jian Jian goes into a tailspin. She feels angry and betrayed, and the reality of the situation hits her: The two boys aren’t truly her brothers, not by blood anyway.

Feeling abandoned, she chooses to run away from the problem by going to spend the summer at her grandma’s and not sending her brothers off when they leave. But ignoring the problem doesn’t make it go away, and we easily see how much Jian Jian is affected by this change, from simple routines such as scanning the bus card three times.

After a while, Hai Chao finally has enough of Jian Jian ignoring all her brothers’ calls, so he sits her down and talks some sense into her. That’s when Jian Jian breaks down and admits that she just really, really misses having them around. (We do too!)

When the three siblings drift apart

Unfortunately, as with most long-distance relationships, the siblings drift apart. They gradually have their own social circles and are busy with their own lives, and they eventually have less and less things to talk about.

”What do you usually talk to Ling Xiao about?” “Nothing much. There’s isn’t much to talk about anyway.”

Their regular video calls turn into intermittent messages that turn into greetings during special holidays. And when the two brothers both choose to stay on in Singapore and the United Kingdom respectively after they finish their studies, Jian Jian realizes she has stopped waiting for them to come back. And the tight-knit sibling squad may have just dissolved right before our very eyes.

Which of these moments hit you the hardest? And who is your favorite brother and your least favorite adult? Let us know in the comments below! And fun fact: The sibling’s real life ages are actually reversed, with Tan Song Yun being the oldest and Song Wei Long being the youngest!

Belinda_C has always wished that she would have an older brother. Give me my Ling Xiao and Zi Qiu! Talk dramas, SEVENTEEN and Shinhwa with her on Twitter!