tvN’s latest offering is an out-of-this-world K-drama. Quite literally. “Tale of the Nine-Tailed” tells a tale of a century old gumiho (nine-tailed fox) who’s searching (and pining) for his lost love. We also have a feisty human and a mischievous half-brother in the mix, along with plenty of other mythical creatures peppered throughout. It’s a rich story with plenty of beautiful visuals and great acting, and together, they provide quite a cinematic viewing experience!

Warning: Spoilers ahead for the first two episodes.

The drama kicks off in the year 1999, with a car driving down a road, when the street lamps turn off one by one. It’s Dumbledore, with his Deluminator. Oops, wrong fantasy story! Back to the story at hand, the car, with a little girl and her parents inside, flips over and crashes. Without giving too much away, the little girl, who’s name is Nam Ji Ah (Jo Bo Ah), loses both her parents that day as well as has her first encounter with the supernatural (and Lee Yeon). Lee Yeon (Lee Dong Wook) appears that night because he’s looking for someone called Ah Eum, but upon realizing they’re not the same person, he makes Ji Ah forget everything that happened.

21 years later, we see Lee Yeon again and learn more about him. He’s an avid lover of mint chocolate ice-cream (a win for #teammintchoc!). And he’s a nine-tailed fox. Lee Yeon was once the mountain spirit of Baekdudaegan, but chose to give up his status after falling in love with a human girl named Ah Eum. Upon her death, he was so broken hearted he made a deal with the Afterlife Immigration Office. He would work for them in a mercenary-type capacity, if they would reincarnate her. He’s been working for them for 600 years now, and though he’s come across a few Ah Eum-lookalikes over the years, none of them holds the fox bead he had given previously Ah Eum.

The current Ah Eum lookalike is none other than Ji Ah, the young girl Lee Yeon saved 21 years ago. However, though he intended for her to forget the incidents of that night, she never forgot and remembers his face clearly. So when the two come across each other again and mysterious events continue to surround Lee Yeon, Ji Ah is adamant to get to the bottom of things. She eventually learns of Lee Yeon’s true nature and asks for his help in finding out what truly happened to her parents that fateful night. After a little digging, Lee Yeon informs Ji Ah that her parents aren’t actually dead, which leads to a deepening mystery.

Ji Ah’s face is causing some issues for Lee Yeon.

There’s quite a few supernatural incidences in the first few episodes and at the center of all the chaos is none other than Lee Rang (Kim Bum), Lee Yeon’s half-brother. Angry that Lee Yeon chose a human and abandoned him, he makes it his life mission to make Lee Yeon suffer. He apparently also enjoys leaving chaos in his wake and doesn’t give much thought about the harm and grief he inflicts on humans, even going so far as to twisting their words and wishes like an evil genie.

We see various supernatural creatures too, including a Bulgasari, a mythical creature that plants and feeds on nightmares. This creature happens to be a colleague of Ji Ah’s, so she gets hit with a nightmare too — a nightmare where her mother rolls a skull to her. This very skull is fished up the next day by some fishermen, so she and Lee Yeon head to the island where the victim and his daughter live. At the island, Lee Yeon notices that all the spirits have left because of a dangerous presence, but one little girl — a guardian of a tree — is left behind because her feet are tied down.

Ji Ah cuts her loose, and out of gratitude, the guardian leads Ji Ah to what she’s searching for in regards to her parents. Ji Ah finds a cliff that happens to be the background in one of her parents’ photos, but before she can uncover anything else, she’s attacked by one of the fishermen who has gone a little nutty. (In fact, one by one, the other fishermen become mad and even start dying by suicide).

Lee Yeon appears in time to stop the mad fisherman from doing any fatal damage to Ji Ah, and applies some herbal remedy on her injured shoulder. But the remedy begins to burn and reveals some webbing patterns on her shoulder which startles Lee Yeon. Suddenly, as if she’s possessed, she grabs Lee Yeon and confronts him, saying, “Why did you kill me?”

There’s so much to enjoy about this premiere, especially how it sets up a rich mythology. All the prominent gumihos in Korean dramas have been female, so it’s exciting that we’re getting a male version of what it usually regarded as a (seductive) feminine character. With the premise of Lee Yeon working as a “headhunter” for the Afterlife Immigration Office, we’ll no doubt come across plenty of other mythical creatures so that area will certainly be riveting.

The cast is pretty great too. There are plenty of familiar faces in the supporting roles, but naturally it’s the main trio of Lee Yeon, Ji Ah, and Lee Rang that are front and center in these two episodes, and the casting is pretty spot on. As mentioned earlier, the image that comes to mind when we talk about gumihos is traditionally feminine, and Lee Dong Wook has a softer quality to his features, especially with the hair-do in this drama. Lee Yeon embodies both feminine and masculine traits, and this further emphasizes his otherworldly, mythical status, especially since plenty of mythical beings from various cultures are often androgynous or gender fluid. In fact, he even states that he doesn’t care who Ah Eum reincarnates into — man or woman, beautiful or ugly. (As long as she’s not over 60… but that’s only because he doesn’t want her to die too quickly again). He’s a hopeless romantic, and though that can be attributed to the nature of a gumiho (they can only love one person in their lifetime), it’s still pretty swoony. And as powerful and as formidable as he is, he’s not above kneeling down on both knees to beg to have one last word with Ah Eum before she crosses the Sando river (crossing into the afterlife).

Nam Ji Ah is an interestingly layered character too. Her childhood encounter with the supernatural leads her to believe in their existence, and she even takes a job as a producing director for an urban legends program so she could delve further into all the mythology. I’m glad that she’s not written as being unafraid or underestimating these creatures because that would just be naive. Instead, she has a healthy fear of them but relies on her smarts to guide her. Even at a young age, she was able to figure out her parents weren’t actually her parents (shapeshifters?), and though having a young child stab her “mother” with a pair of scissors seems like a stretch, I’ll give it a pass anyway. She also has quite a feisty side to her, not backing down to sleazy old men threatening or harassing her.

Out of the three main stars, the one that left the biggest impression is Kim Bum. This is his first drama back after completing his military service, though the last time I saw him was probably in “Boys Over Flowers” (which is a decade ago). In Lee Rang’s first scene, Kim Bum looks so innocent and unassuming, but the moment he “restyles,” his whole look just screams mischief and cunning.

Lee Rang fully owns up to his sinister intentions and it’s enjoyable having such a full-on antagonist straight off the bat without hiding in the shadows or pretending he’s one of the good guys. He knows who he is, has a devilish smile plastered on his face at all times, and if you look closely enough, you can practically see a mischievous glint in his eyes. It’s so entertaining to watch and a lot of it is to do with Kim Bum’s performance. That’s not to say Lee Rang is a one-dimensional antagonist. A lot of his actions stem from abandonment issues (and as his half-brother Lee Yeon puts it, a “brother complex”), and his disdain for humans might come from the fact that one of his parents is human. So there’s some deep-seeded problems here (hey, even mythical creatures have issues!) but either way you spin it, he doesn’t have a clear moral compass and will most likely always have a little devil in him, which just adds to the fun of it all.

Another entertaining part about the drama is the generally darker tone. They don’t portray these mythical creatures as cute and cuddly, but instead give them all an appropriately sharp edge. This raises the stakes for the humans like Ji Ah, because as feisty as she is, she is still frail when standing next to these supernatural creatures – creatures who could very easily kill her. The production doesn’t shy away from the creepy factor too, making some scenes appropriately chilling. And between all the darkness, we also have some much needed lighter moments peppered throughout to bring some levity to the proceedings. 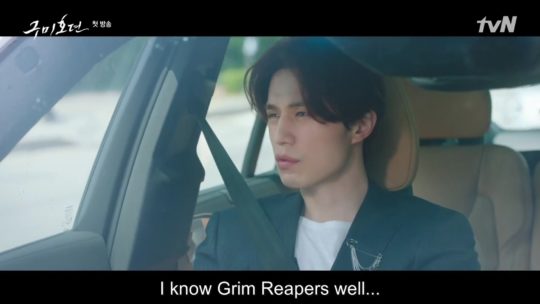 The drama delivers production-wise as well. Everything’s very beautiful, from the scenery, to the color palette, to, yes, the people. The CGI is seamless and fluid, but recent K-dramas have really been delivering on this front so this has somewhat become the standard (especially on cable stations).

The action is exciting to watch, and with supernatural creatures in the mix, the action scenes are on a whole other level with creatures scaling scaffolding in a blink of an eye or zooming by at top speed. It’s all wonderfully done, and together, “Tale of the Nine-Tailed” delivers a superbly epic viewing experience!

Watch “Tale of the Nine-Tailed” here:

Have you watched the premiere? On a scale of 1 to 10, how much did you enjoy it? Let us know in the comments below!

Belinda_C loves the Bulgasari fight scene, especially with that BGM. It was all very… hot! Talk dramas, SEVENTEEN and Shinhwa with her on Twitter!