Episodes 5 and 6 of “Tale of the Nine-Tailed” are like a berry cheesecake, sweet but tangy. There are so many delightful moments between Yeon (Lee Dong Wook) and Ji Ah (Jo Bo Ah) as they go around town tracking down leads to Ji Ah’s parents, but then we are bombarded with ominous prophecies about how one of them is fated to die. It’s heart-wrenching to hear, but we probably knew that a love story between a nine-tailed fox and a mortal was going to rip our hearts out somewhere along the way.

But before the pain arrives, let’s enjoy the sweetness that is on offer courtesy of some memorable lines (plus one hair-raising one):

Warning: Major spoilers for episodes 5 and 6 ahead!

“The power of love. That’s the most effective treatment.”

After Ji Ah takes Yeon back to his place to treat him, a worried Shin Joo (Hwang Hee) barges in to check up on him (and accidentally revealing himself as another fox). Realizing Ji Ah is the one Yeon has been pining after all these years, he insists that Ji Ah stays to watch over him, after all that is the most effective treatment. He also doesn’t forget to be the best wingman he can be and starts raving about Yeon’s qualities — life expectancy, medical history, assets etc — as well as his love for mint chocolate ice cream and rubber duckies. 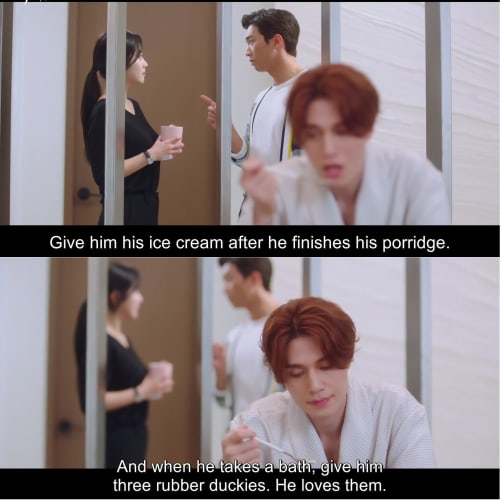 Speaking of mint chocolate ice cream, Ji Ah (bravely) tries it, and after realizing she likes it, continues on for a second and third spoonful. Yeon looks on with surprised wonder, and you know he’s even more helplessly smitten now that she enjoys his favorite ice-cream flavor. #teammintchoc!

“As long as I’m around, the wind belongs to you.”

When a young Ah Eum first comes across Yeon, she treats him like a domestic pet, petting him and offering him food and nice clothes in return for his service and company. And though Yeon shoos her off plenty of times, Ah Eum unabashedly comes back again and again to hang out with her “pet,” and even trains with him in archery.

Yeon eventually asks (an older) Ah Eum why she’s keen to learn how to use a bow and arrow, when she reveals that it’s to kill her father, the king of the nation. Yes, apparently Ah Eum is a princess, the seventh daughter of the King. (Which is probably why she’s able to sneak out and roam around freely). And in a big revelation, we also learn that an imposter had taken the King’s place, an evil being called the Earth Dragon, also known as the… imoogi!

Seeing her determination to be a great archer even under bad wind conditions, Yeon promises her that as long as he’s around, the wind belongs to her. Sure, you can find a man who give you bags and cosmetics, but can you find a man who will give you the wind?

And indeed, Yeon is all Ah Eum/Ji Ah needs even when surrounded by the darkness. Together, the two speak with the ghost sisters (from last week) and learn the troubling reason behind their deaths. (The uncle who was babysitting them was molesting them, and while struggling, they fell off the balcony). Seeing justice served, the ghost sisters are finally able to move on into the afterlife.

After helping the ghost sisters, Ji Ah and Yeon celebrate with some food and beer, and talk about their common interests (They give “Amazing Saturday” a shoutout here after losing a bet to the cast on the show). When discussing their dreams, Yeon doesn’t seem to have an answer, so Ji Ah offers him choices such as travelling around the world, owning a cafe, or having a million dollars. And that’s when Yeon just nonchalantly picks up his phone and asks Ji Ah her account number. (Where can I find such a man?) 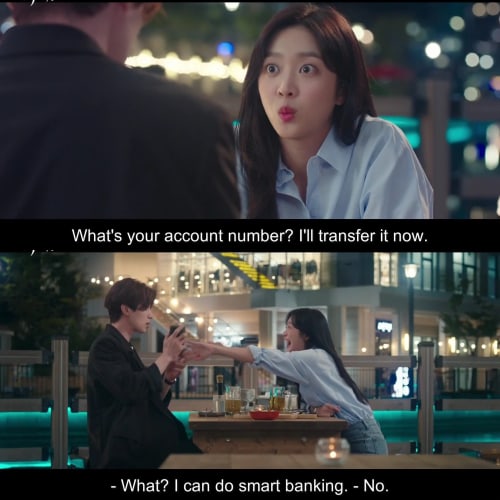 Yeon confesses that if he had to pick one, his is to be a human. Ji Ah retorts that being human is overrated, what with having to deal with traffic and office politics and other “human issues,” to which Yeon casually offers to get rid of her workplace. This guy has no limits when it comes to Ji Ah!

After Yeon walks her home, Ji Ah sees two fireflies flying around her, similar to how two fireflies came to her when she was younger and in a lonely and vulnerable state. Child-Ji Ah pretended they were her parents and sought comfort in this idea. Present day-Ji Ah is more aware and realizes that the fireflies were sent by Yeon, both then and now. The camera pans up to reveal Yeon watching over Ji Ah, the exact way he did so many years ago, despite believing that she wasn’t Ah Eum’s reincarnation. And the way he looks at Ji Ah with affection dripping out of his eyes… seriously Lee Dong Wook has the most expressive eyes!

“See me clearly for who I am.”

Following a lead about Ji Ah’s parents whereabouts, Yeon and Ji Ah head to a Korean folk village. There, Yeon goes off to track down the “governor,” while Ji Ah wanders around and changes into a pretty hanbok that catches her eye. When Yeon comes across Ji Ah again, he’s mesmerized by seeing her in hanbok and goes after her, eventually catching up with her in the middle of a flag-adjourned bridge. And the moment Ji Ah turns around and says she’s been looking for him, Yeon is so caught up in the moment that he rushes in and kisses her!

Ji Ah, more level-headed, questions Yeon whether he was kissing her or his first love. She tells Yeon she’s not Ah Eum’s shadow and to see her clearly for who she is. And it’s then we’re reminded just how strong a character Ji Ah is. She isn’t going to be charmed by Yeon’s good looks or constant affection and refuses to live in denial. Knowing that Yeon has blurred the lines between Ji Ah and Ah Eum, she urges Yeon to properly think his feelings through. 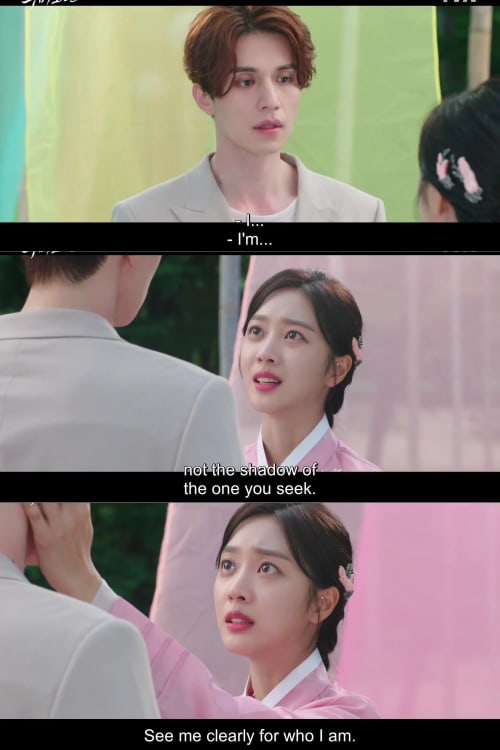 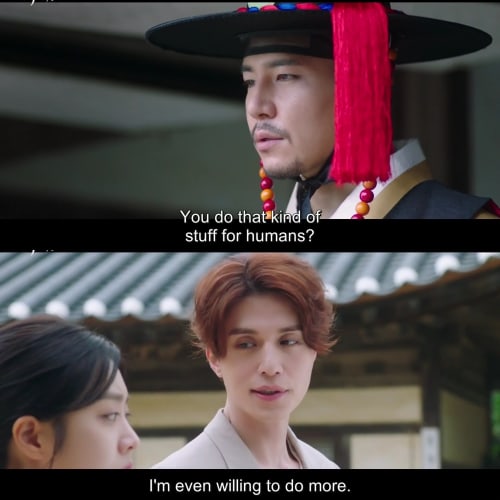 And Yeon goes right on to prove it. In order to get more information from him, the two start and all out fight with arrows, swords, and powerful artifacts before agreeing to have an item-less, barehanded fight. After taking the governor down, Yeon pulls him up and casually talks about coffee as if they weren’t just in an intense fight. Apparently, this ex-mountain spirit is also his best friend (and a moon bear).

The governor reveals he was approached by a mortal in a navy blue suit months before Ji Ah’s accident. Though the man looked average, he had a branding on his forehead, a type of punishment that was used even before the Joseon Dynasty. And according to the man, the target of the accident was Ji Ah and not the parents because… the spirit of the King lies within her.

Rang, wanting to acquire a powerful artifact dubbed the eyebrows of a tiger, seeks out a fortune teller who also happens to be at the folk village. The fortune teller tells Rang that he can only have the artifact if he trades him what’s most precious to him. After some intense thinking, Rang (reluctantly) comes to the conclusion that the thing most precious to him might be his brother, Yeon.

Rang is reaallly unhappy to hear his suspicions confirmed. Lol.

So he asks Yeon to meet him at the fortune teller’s without telling him why, and the quippy three-way banter here between Yeon, Rang, and Ji Ah is so fun to watch. 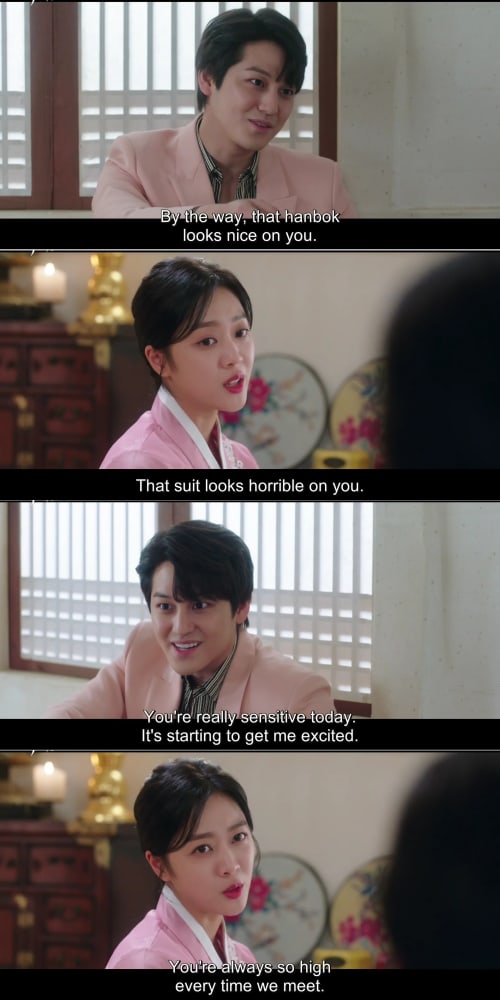 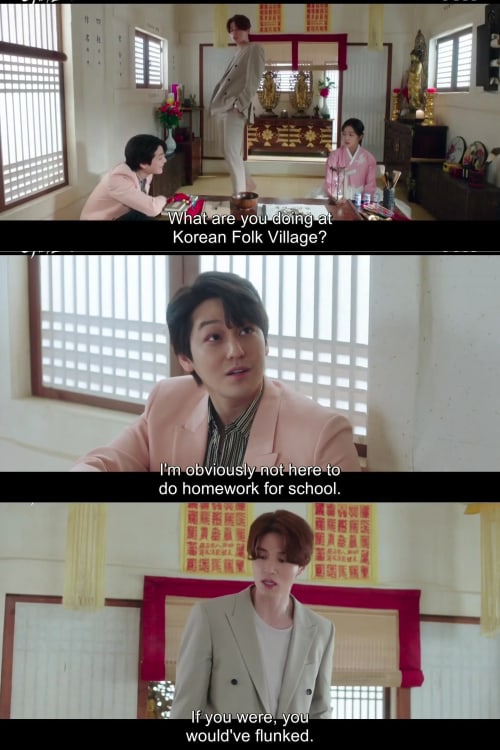 Having set a spell on Rang for him to lead them to the “man in the navy suit,” Yeon and Ji Ah are about to follow him out when Yeon is “taken” by the fortune teller and placed into his magical bottomless sack.

Ji Ah realizes this is a very solid lead on her parents and is probably her only chance to figure who the “man in the navy suit” is, but after some inner debate, she chooses to free Yeon instead. The fortune teller gives her a similar deal, and tells her to bring her most precious item to trade with him. She offers him a music box, the one her parents gave her right before the accident and the last item connecting her to her missing parents. And while it sounds convincing enough, it doesn’t pass the fortune teller’s appraisal. Instead, he discovers that she’s in possession of a fox bead and asks for that instead. Ji Ah readily gives it up and thus Yeon is freed (but not before giving the fortune teller a good beating).

Yeon asks what Ji Ah gave up for his return, but Ji Ah brushes off his questions by saying that she didn’t give away much and that he’s cheaper than he thinks. But now that she’s “bought” him, she reminds him “you’re mine from now on,” which from the look on Yeon’s face is probably heavenly-sounding to him.

That being said, it’s surprising that Ji Ah would so readily give up the fox bead. Either she doesn’t know just how powerful an object it is, or she really doesn’t think it matters to her that much. Either way, it’s pretty flippant of her, and we can only imagine Yeon’s horror and anger after finding out.

With the fox bead no longer in her, it seems as if Ji Ah has lost some kind of protection because next thing we know, the imoogi is appearing in her dreams. We’ve only seen a child version so far (kids grow up so fast, don’t they?), but this child actor does cold and chilling so well, we can only imagine how frightening a fully fledged-imoogi will be.

Ji Ah wakes up from her nightmare all shaken, and as she turns around, we see scales on the back of her neck, the very scales we’ve see on the imoogi!

Start watching “Tale of the Nine-Tailed”:

Which line of Yeon’s made you swoon the most? And how psychopathic was Rang with those baseball players? Let us know your thoughts on episodes 5 and 6 in the comments below!

Belinda_C is getting Harry Potter/Voldermort/horcruxes flashback from episode 6. Anyone else? Talk dramas, SEVENTEEN, and Shinhwa with her on Twitter!