“Tale of the Nine-Tailed” is gradually winding itself up for the climax in a few weeks time, and to get us ready for it, they are significantly upping the stakes. Just as we think the good guys (and foxes) are getting the upper hand, The Imoogi reveals himself to be a very real and formidable threat. Before all the angst and pain really sets in, the drama made sure to soften the blow first by letting our leads have some happy moments which no doubt made us fist pump the air in triumph.

So, here are five times we shouted for joy or gasped in horror while watching episodes 11 and 12:

Warning: You know the drill. Major spoilers ahead!

When the Butler’s plans are foiled

We learned in the previous episodes that The Imoogi (Lee Tae Ri) is after Yeon’s (Lee Dong Wook) body (or more specifically, his heart). And so the Butler (Uhm Hyo Sup), being the good butler that he is, sets up various plans that involve having those close to Yeon betray him. With Ji Ah (Jo Bo Ah), the Butler uses her parents as bait, but Ji Ah continues to place her faith in Yeon and tells him about the Butler’s proposed deal. (Isn’t it refreshing when the leads actually communicate with each other?).

The Butler’s plan for Rang (Kim Bum) is just as despicable. He exploits Rang’s insecurities and makes him again question his relationship with his brother, suggesting that Yeon is too busy helping Ji Ah with her problems and wouldn’t spare any time for him despite his impending demise (Rang was given a deadline to deliver Yeon to the Butler). This proves to be the straw that breaks the camel’s back, because next thing we know Rang agrees to the Butler’s terms and promises to deliver Yeon to him.

The next day, Yeon goes to meet Rang so he can get some information off him. Rang drugs Yeon’s drink and after an argument about Yeon’s constant disregard for him and Rang’s overall immaturity, Yeon falls over unconscious, allowing the Butler to come in to harvest his heart.

But wait! Just as the Butler is about to plunge a knife into Yeon, Rang grabs onto his arm and stops him, because — unlike the Butler who traded his whole family for a longer lifespan — he couldn’t sacrifice his family no matter how despicable he could be. The Butler invokes their debt-bond but nothing happens. And that’s because… Rang is actually Yeon!

The two brothers had traded places the night before when Yeon went to check in on Rang. Again realizing that his brother really does care about him, he comes clean about his hostage situation. And that’s when Yeon suggests the plan to trade places (despite thinking that morphing is a trick that is beneath him).

And just like that, the two brothers manage to achieve both their goals — breaking Rang’s debt-bond (The Butler agreed to end it if they let him live) and getting their hands on the ground cherries. These two have been at each other’s throat for the most part, so actually seeing them join forces for once is exhilarating, and taking the slimy Butler down is just icing on the cake. Now that we know they had traded places, their argument right before “Yeon” loses consciousness takes on new light. In a sense, they were yelling at themselves and acknowledging how they had failed the other brother. It takes a lot of self-awareness, and hopefully this “walk a mile in each others’ shoes” experience is cathartic for them and they can truly move on. 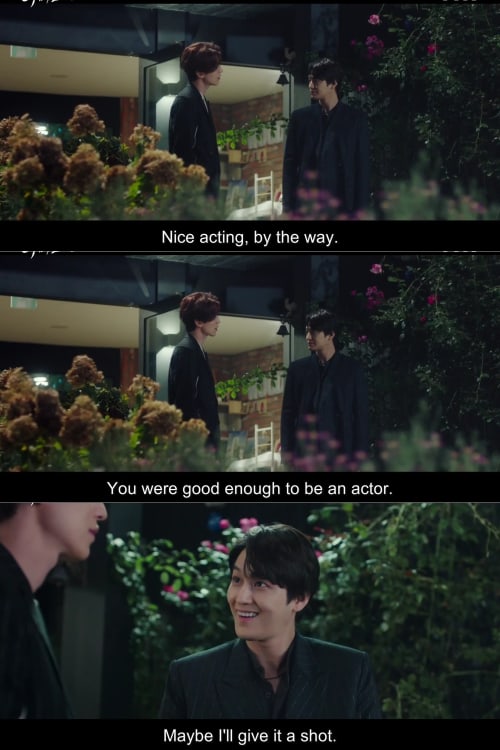 I have a feeling he’ll be good at it too!

When Ji Ah finally reunites with her parents

Ji Ah follows Yeon to the Afterlife Immigration Office in order to seek help from Granny. Obviously, a human being isn’t allowed in the office and this greatly angers Granny. But Ji Ah puts on a brave front and barters with Granny to allow her to use one of her artifacts so she can find her parents. Granny is impressed with Ji Ah’s pluckiness and so she tells Ji Ah where her parents are — trapped in the ground cherries.

On a side note, we also find out that Granny hasn’t been taking any action against The Imoogi because she knows there’s a piece of him in Ji Ah, and to kill him, Ji Ah would have to be killed too. So she hasn’t been doing anything for Yeon’s sake, which in the grand scheme of things, is kind of odd for the usually by-the-rules Granny, no? The Imoogi has cost many people their lives and yet she’s allowing him to continue to wreak havoc merely because it would hurt Yeon? Is Granny hiding something or do we need to re-examine the Granny-Yeon relationship?

Back to the ground cherries. After Rang and Yeon’s switcheroo plan proves to be a success and they get their hands on them, Ji Ah is promptly reunited with her parents. They’ve been in deep slumber for the past twenty years, but at least they’re alive and well and no longer missing. And the parents, after learning that the man who released them is Ji Ah’s boyfriend, invites him over for dinner.

And while Yeon is an all-powerful (ex-)mountain spirit, dining with the in-laws proves daunting even for him. Thus, he asks advice from his two new part-timers — Jae Hwan (Kim Kang Min) and Sae Rom (Jung Yi Seo) — who tell him to always be honest and brief with his answers and to bring some gifts (like ginseng or supplements) to please the parents. Yeon takes all this advise to heart a little too well, which results in him gifting the parents a very expensive car and being very truthful about his (lack of) academic and work qualifications. But he’s also honest about how he feels about Ji Ah, and that’s all that really matters for the parents.

Right when the show started, I’m sure there were many of us who thought there would be a thing between Rang and Yoo Ri. But from the moment Yoo Ri (Kim Young Ji) and Shin Joo (Hwang Hee) interacted, we were helplessly taken in by this adorable coupling. The Yoo Ri-Shin Joo couple has taken their relationship to the next level, but can we just say that we’re still not completely over Rang and Yoo Ri? In this week’s episodes, we get more interactions between the two and their relationship gives both familial and romantic vibes. Their chemistry is just so good!

Just look at how Rang looks at her!

We flashback to five years ago when Rang first brings home a feral Yoo Ri. He feeds her then asks her to leave but she stubbornly follows him around, which actually elicits a tiny smile from him. Rang trains her to fight, and when she successfully attacks someone for the first time, she giddily reports back to him and he looks like a very proud dad.

Their interactions are just delightful to watch which makes it even harder because we’re now officially torn between Shin Joo-Yoo Ri and Rang-Yoo Ri. Who would’ve expected Rang, the second male lead, to third wheel not one, but two couples? But rejoice RaRi fans, because there’ll be a spin-off with the two focusing on their early days together, which will be available… soon.

When The Imoogi shows us what he’s really capable of

The show has conditioned us to be afraid of The Imoogi ever since the first or second episode. And while he’s creepy and chilling, he hasn’t come across as legitimately threatening — or at least not formidable enough that our supposedly powerful supernatural beings should fear him so much. However, these doubts all but dissipate this week after we see him put his abilities in action. And they’re horrifyingly mind-boggling. Literally.

One of The Imoogi’s powers is to hypnotize people into doing his bidding. All he has to do is utter his commands. No eye or physical contact is needed, which means anyone could be at his mercy. He uses his powers to make a restaurant full of people fall asleep, has hundreds of people die by suicide, and even uses it on Yoo Ri to make her attack an unsuspecting Rang, and it’s all quite horrifying.

Yeon has been well-matched with The Imoogi so far, keeping abreast of his plans for the most part, but now the tables have turned. Anyone around Yeon and Ji Ah could be unknowingly under The Imoogi’s hypnosis, just waiting to put his plans into action. In fact, Shin Joo is one such ticking time bomb, but neither we nor the characters know what his orders are, which only just amps up the fear factor.

Poor Rang. Look at how happy he is to welcome Yoo Ri home, only to be stabbed again and again by her. This is the Rang-Yeon reunion all over again.

The Imoogi’s awakening (the sequel)

Needing to save Rang, Yeon puts his “hunt-The-Imoogi-down plan” into overdrive. He has his two part-timers research everything about The Imoogi, which leads to discovering that one of his weaknesses is horse blood. And after confiscating the ground cherries, Yeon also uses it to bait the Butler into dishing on how to get rid of The Imoogi. The Butler reveals that The Imoogi can’t be killed, only put into slumber, and the ingredients needed are the same things that woke him up — a pool of water, the body of a living person, blood from the sacrifice, and power from a divine being.

After figuring this all out, Yeon interrupts Terry’s (a.k.a The Imoogi) date with Ji Ah and starts the ritual. Except nothing happens, and we suddenly cut to Granny frantically exclaiming that Yeon had gotten it all wrong. Terry then grins at Yeon and tells him that he wasn’t the main part ie. he was the fractured offshoot. That’s when Ji Ah starts complaining about how her body is too hot, and when she turns around, her face is covered with scales. “It’s been a long time, Yeon.”

Which means, instead of putting Terry to sleep, Yeon inadvertently woke up the piece of The Imoogi that was in Ji Ah, which also happens to be the main part. Twice Yeon has woken up The Imoogi (he was the one who woke Terry up too), so technically all this mess is kind of his fault. Granny has warned him again and again that he and Ji Ah were not meant to be and we can now see why. It’s a heartbreakingly vicious cycle, y’all!

Most horrifying of all? We’ll have to wait an extra week for the next two episodes, as they’re on hiatus for a week. So, I’ll see you guys again in two weeks time!

Start watching “Tale of the Nine-Tailed“:

Which couple do you ship more — JooRi or RaRi? And does knowing The Imoogi’s rather heartbreaking beginnings change your perception of him? Finally, did the sight of Shin Joo smelling the slippers make you laugh more than it should? Let us know your thoughts on episodes 11 and 12 in the comments below!

Belinda_C was thoroughly amused with Yoo Ri’s interactions with Puppy Boy. Thank goodness Shin Joo was there to help with the babysitting! Talk dramas, SEVENTEEN, and Shinhwa with her on Twitter!