Attention Shawols! SHINee will be celebrating their 13th debut anniversary through a special livestream this May.

On May 4, media outlets reported that SHINee will be celebrating their 13th anniversary of debut through holding a special live broadcast titled “SHINee DAY.” It will take place on the day of their debut, May 25, starting from 8 p.m. KST.

Fans can watch the livestream via the quartet’s channel on Naver V Live. SHINee members Onew, Minho, Key, and Taemin are said to have prepared various content for the event, which will be based on a concept of a party.

Apart from communicating with the fans, SHINee will also give performances of their hit songs to decorate the celebration of their 13th debut anniversary more. There will also be mini-games, presentation of behind-the-scenes videos, and a Q&A session.

SM Entertainment’s SHINee – consisting of Onew, Key, Minho, and Taemin – has been in the K-pop industry since May 2008. They are dubbed as the “Princes of K-pop” as their unparalleled skills and talent helped them saw immense popularity while their senior groups were still dominating the music charts.

SHINee is known for multiple songs such as “Lucifer,” “Replay,” “Juliette,” “Sherlock,” “Ring Ding Dong,” “Symptoms,” and many more! Initially a five-member group, vocalist Jonghyun passed away in December 2017. 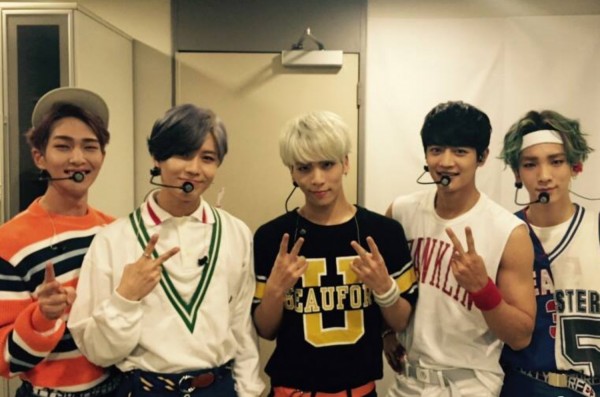 The boy group was inactive in the K-pop scene since December 2018 when the members started enlisting in the military. Onew began his mandatory military service in December 2018, followed by Key and Minho who enlisted in March and April 2019, respectively.

Taemin, on the other hand, took the time to do make a solo comeback with a new studio album titled “Never Gonna Dance Again,” which was released in two parts last year.

Meanwhile, SHINee has already launched two albums so far, marking their return to the K-pop scene in more than two years. The group has proven their unchanging popularity and influence by sweeping various charts.

In February, Key, Minho, Onew, and Taemin dropped their seventh studio album titled “Don’t Call Me” as a gift to their fans, collectively known as Shawol. It contains the title track of the same name.

“Don’t Call Me” ranked No. 1 on the iTunes Top Albums charts in 47 countries, as well as on the digital album sales chart of China’s QQ Music and Kuwo Music. Moreover, SHINee’s new album peaked at No. 1 on the Gaon Album Chart and went on to earn a platinum certification after selling more than 250,000 copies. The album also debuted at No. 7 on the Billboard World Albums chart, becoming the band’s first entry in three years.

After almost two months, SHINee made another comeback with the repackaged version of “Don’t Call Me.” Titled “Atlantis,” the new album features three new songs including the new title track of the same name. Once again, the boy group dominated the iTunes Top Albums charts in 26 countries and reached No. 1 on QQ Music’s digital album sales chart.