Now, Pinkfong and NCT Dream return with a 2D animated music video for the hit song “Hot Sauce.” The song features smaller animated versions of the NCT Dream members singing and dancing with colorful dinosaurs. Additionally, the lyrics of the song have been altered into an all-new track over similar melodies.

The Pinkfong and NCT Dream version of “Hot Sauce” was released both on Pinkfong’s Korean and English YouTube channels, as well as on the NCT Dream official YouTube channel last May 28, 7 PM KST. Additionally, special merchandise based on the adorable character designs seen in the animated music video will be available in the middle of June 2021 – both on online and offline channels. 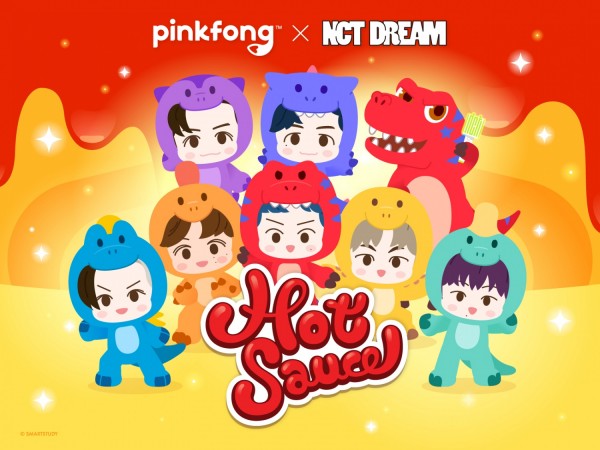 “Hot Sauce” is the title track of the NCT subunit’s first studio album of the same. It was a landmark release for NCT Dream and their fanbase, as it features the original seven members: Mark, Renjun, Jeno, Haechan, Chenle, Jaemin, and Jisung. The album “Hot Sauce,” first released last May 10, also sold more than a million copies.

The collaboration between Pinkfong and NCT Dream follows after the NCT subunit released their cover version of Pinkfong’s educational track “Dinosaurs A to Z.” In the hit cover version, now with more than 5 million views on the NCT Dream YouTube channel, the members are dressed in their safari outfits as they go through different dinosaurs corresponding to each letter of the alphabet.

Pinkfong is the children’s educational brand under the South Korean multinational education-entertainment company SmartStudy. The brand is best known for the viral children’s song “Baby Shark,” a video whose “Baby Shark Dance” video has already amassed more than 8.6 billion views since it was released four years ago.

Furthermore, its YouTube channel has more than 48 million subscribers around the world, following and watching its content of bright and colorful educational videos for children. Its content includes songs and stories, number and alphabet songs, lullabies, and fairy tales.

NCT Dream is the third subunit under the large 23-member boy group under SM Entertainment. Originally launched in 2016 as a teenaged concept group, they later evolved and adopted more mature concepts in their releases. They made their debut together on August 25, 2016, with the single “Chewing Gum,” and the subunit having an average age of only 15.6 years old.

Since they debuted together as NCT Dream, the seven NCT members have released four EPs, six singles, and one studio album with “Hot Sauce.” Pre-orders for their first album easily surpassed 1.7 million equivalent album copies, setting a new record for the group. Upon its release “Hot Sauce” topped the South Korean Gaon Album Charts, with the lead track of the same name topping the Gaon Digital Singles Chart. They later became tagged as “double million sellers” on May 26 as their album sales crossed the 2 million copy mark.