Ever since it was officially announced that Shin Min Ah and Kim Seon Ho would be starring in a romantic comedy together, people were more than a bit obsessed. Even well before the premiere of the series, fans were dubbing them as the “dimple couple,” loving the fact that both the leads have their distinct dimple charms. Now that the day has finally arrived and the first two episodes have aired, here are five things we absolutely loved about episodes 1 and 2 of “Hometown Cha-Cha-Cha.”

Is there a more perfect pair?

Shin Min Ah plays Yoon Hye Jin, a dentist who quits her job in the city as a result of a fight she gets into with her boss. She goes to a small town to start fresh but finds herself getting into a lot of bad luck when she gets there, causing her to rely on the help of Hong Doo Shik, played by Kim Seon Ho. Doo Shik is a local resident who is technically unemployed but has a lot of odd jobs. He continually helps Hye Jin while she gets back on her feet and eventually opens up a practice in the small town.

Seeing Shin Min Ah on the small screen is like being hit with a ray of sunshine. Her aura is infectious, and her smile lights up the screen. There’s so much confidence in her acting and the way she portrays her character that it’s hard not to be drawn into her character. Her role as Hye Jin is taking a bit to warm up to, but there is no doubt that once she adjusts into the small town life, we will be completely entranced. Looking forward to seeing her in the episodes to come!

When it comes to Kim Seon Ho, we can understand the hype behind why he was such a big sensation after starring in “Start-Up” last year. His charm and natural charisma puts a smile on your face, and his character in this series is far from being one dimensional, which serves as a great reminder that he’s a talented actor. We’ve already been blessed with that entrancing gaze he gives the female leads when falling in love. There is a lot to look forward to from Kim Seon Ho and his character as this series progresses!

The first shot of the series, we are greeted with a picturesque view:

And then as the series progresses, we see beautiful views of the ocean in the small town of Gongjin. It really is a thing of beauty. 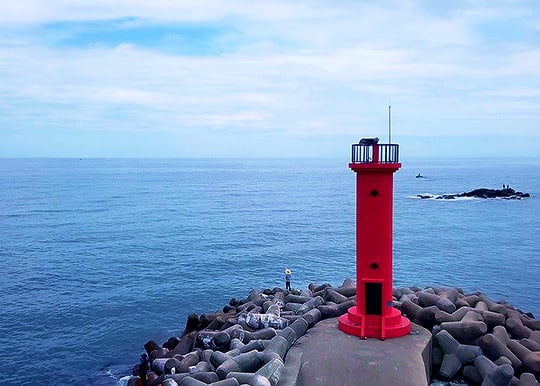 The cinematography and scenic shots are breathtaking and enough to heal your soul. It’s so calming, serene, and it completely fits the vibe of the series.

The quick but subtle pan outs to the little town are so relaxing. It’s the perfect setting for a romantic comedy as well as the two main leads. With the bright green grass and blue skies, you’ll find solace in the setting alone.

We knew the series would have some laughs as it is a romantic comedy, but the humor in this particular series makes you also feel all warm inside. From the moments where Hye Jin is wearing the seafood restaurant washroom sandals, to the little girl who thinks Hye Jin’s shoes and purse are fake, to seeing Doo Shik working at every corner, it was all so hilarious but also tugged at your heartstrings. The humor provided such a feeling of warmth and joy that you couldn’t help but smile throughout the whole first two episodes.

Also, how hilarious was that whole situation with Oh Chun Jae (Jo Han Chul), the singer who is trying to regain the popularity he had from a long time ago? Seeing how sad he was after overhearing Hye Jin gossip about how he was a failure and then so quickly becoming happy after she tells him she likes some of his songs was so endearingly sweet!

4. The heart and healing

From the second Hye Jin steps off the boat and we’re introduced to Doo Shik, we’re greeted with local residents who all have a story. With Doo Shik’s interaction with all the locals, we start to warm up to them and appreciate their individual personalities and charm. From the deaf old lady who Doo Shik helps, to the old ladies who laugh and make fun of Hye Jin as she’s gutting the squid, everything about it was immensely healing and uplifting.

The closeness of this community of people and how much they look out for each other is an aspect that viewers will find comfort in. We also get to see the “good boy” side of Kim Seon Ho once again as he worries about and takes care of Kim Gam Ri (Kim Young Ok), an elder in the village who does not have anyone else in her life. His insistence on keeping her company and piggybacking her when she injures her ankle gave all the heartwarming feels.

5. The heart-fluttering romance to come!

In the first episode, Hong Doo Shik and Yoon Hye Jin hardly seem like a romantic pair; they are the classic enemies-to-lovers K-drama trope. Although we know that there will eventually be a love story between the two, in the beginning of the series, they are nothing but a nuisance towards each other. Doo Shik seems more annoyed by Hye Jin, and Hye Jin is clinging to Doo Shik because he is the only one who can help her out of her tough situation.

By episode 2, viewers are able to see that Doo Shik was actually intrigued by Hye Jin sitting on the beach by herself. He looks thoughtful but pleasantly surprised to see this woman, which quite honestly, was enough to give us butterflies. It was the vulnerable and romantic side of Doo Shik that we are all here for. To top it off, at the end of episode 2, viewers also got to see the two engage in a little skinship as there was the classic scenario of the female lead tripping and the male lead catching her so beautifully in his arms. In other words, it was perfect.

Hey Soompiers, how did you like the premiere of “Hometown Cha-Cha-Cha”? Let me know in the comments below!

binahearts is a Soompi writer whose ultimate biases are Song Joong Ki and BIGBANG but has lately been seen obsessing over Hwang In Yeop. Make sure you follow binahearts on Instagram as she journeys through her latest Korean crazes!