Kim Yoo Jung is back! “Lovers of the Red Sky” has been teased since December of last year, and SBS’s newest sageuk fantasy is finally on our screens. The first two episodes pack in fated lovers, bloodshed, gods, demons, and the reoccurring theme of sight and sightlessness. But is it worth the hype? Here are our thoughts on the premiere!

Warning: spoilers for episodes 1-2 below

The drama starts off in true sageuk fashion, weaving a fantastical tale of three gods that used to be one: Samshin, the goddess of Life (Moon Sook), Mawang or the devil, and the god who balanced both. The animation here is stunning, detailing how this harmonious balance fell apart when the devil ate the god of balance. This is a neat founding myth for the show and posits every battle henceforth as one between life and death, not necessarily good and evil.

The nuance here is interesting because King Yeongjeong (Jeon Kuk Hwang), who brings about this entire state of affairs, does so because he used the devil’s power to butcher his opposition and rise to power. However, once his reign is assured, he no longer has use for the devil. Thus, it is sealed away in a painting of the King on a night where everything changes for two families. This seems to posit that evil is almost necessary at times but must be imprisoned before it can go too far. One can only hope the show pursues such a nuanced line of thinking.

A show that posits the main couple as meant to be always has a tough job ahead of it because it has to explain to the audience why it’s these two and no other. This job gets even tougher when there’s a childhood connection involved because the weight of selling chemistry and fate falls on the child actors. “Lovers of the Red Sky” accomplishes this through tight writing and the metaphor of sight and sightlessness.

Hong Chun Gi (Kim Yoo Jung) is inadvertently blinded due to a ritual performed by Ha Ram’s (Ahn Hyo Seop) father when sealing the devil into a painting of King Yeongjeong. It is this ritual which results in the devil cursing Joseon to suffer drought and famine. This, in turn, puts Ha Ram in the position of having to be a human sacrifice for the gods to bring rain, and it is that sacrifice which results in Ha Ram and Hong Chun Gi falling into the same lake at the same time where Samshin binds their fates together once more by giving Haram’s sight to Chun Gi.

Every event flows logically from the other. Thus, while the child actors are cute together, and the drama makes the smart decision of hinting at a kiss instead of making the children do so, it is the writing that posits them as meant to be.

Loved: The hints at what is to come

There’s so much foreshadowing in these initial episodes! Samshin tells the devil that she’ll restrict his power by giving Chun Gi Haram’s sight but that everything will go back to its place. This means that Chun Gi might go blind in the future, which would cripple her as a painter. It makes for conflict in the love line between her and Haram, because can he really afford to fall in love with the girl whose sight he’ll take?

And there’s more! Before his death, King Yeongjeong says the devil cannot be killed and can only be sealed. Now that Grand Prince Juhyang (Kwak Si Yang) has unleashed the devil upon the world, and it’s only temporarily stuck in Haram, it’s apparent that the only way to get rid of it is to seal it. And the only way to seal it is to have a brilliant artist draw a life-like portrait of the possessed person, like Hong Eun O (Choi Kwang Il), Chun Gi’s father. Given Hong Chun GI’s incredible talent at painting, it is evident that she has a vital part to play in ridding Joseon of the devil. The drama gives away some of what is to come by telling us at the last of a young woman who seals away the devil in a painting after losing her lover, then vanishes. But is this our ending, or just before it?

Speaking of the devil, something appears to have happened post-ritual where a blind Haram and his family were attacked by the former head Shaman Mi Soo’s (Chae Gook Hee) loyal goons. Haram seems to have lived waiting for revenge for the day’s events. But who are his intended targets? And why has he chosen to live as a spymaster? Only time will tell!

Hated: some of the CG

The animation at the start of the first episode was amazing, and the devil looked terrifying, but then things started to look spotty towards the end of the episode. The swirls of golden light around Samshin and the intense dark clouds around Ha Ram are pretty disappointing graphics for 2021. It’s a bit sad as the rest of the cinematography, the painting, and the color palette are all quite lovely.

Worse, Ahn Hyo Seop in demon form looks, interesting to say the least. A defining feature of all sageuk heroes is their stunning mane of glory, like Lee Jun Ki in “Illjimae” and Yoo Ah In in “Sungkyunkwan Scandal”. Poor Ahn Hyo Seob, on the other hand, looks like someone glued a bad weave or a broom to his head! But the acting more than makes up for it! 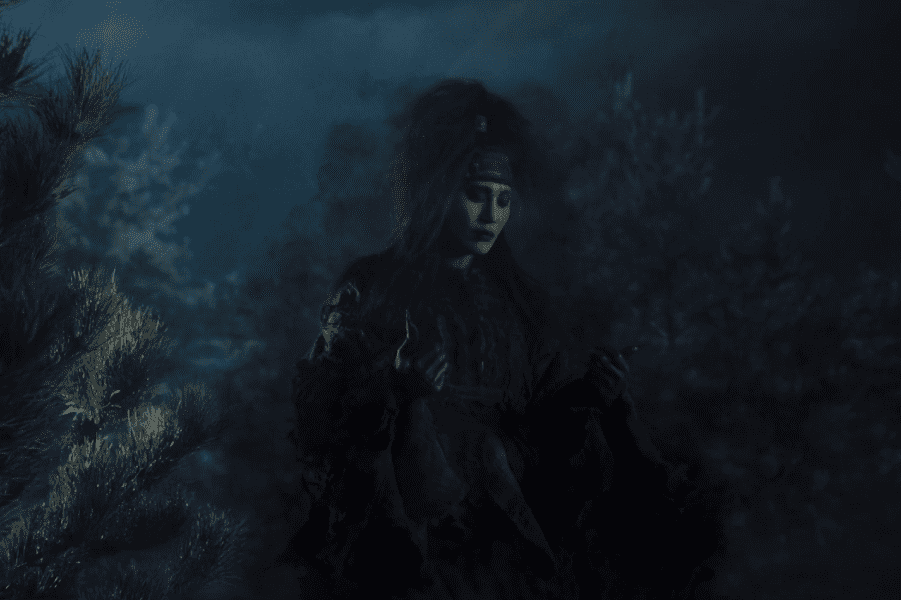 We still don’t know all that much about the characters. Despite the drama’s Korean title being “Hong Chun Gi,” it feels like we’ve spent a lot more time with Ha Ram. Hopefully the show’s focus shifts to her soon! Playboy prince Yangmyung (Gong Myung) makes a brief appearance, but there’s much to learn of his character. Kwak Si Yang is back as a villain for what feels like the umpteenth time, but he does do it well! Here’s to next week establishing character relationships solidly and getting us into the political and fantastical battles between devil and human, prince and king, and greed and perseverance!

Check out the drama below!

What did you think of this week’s episodes? Let us know your thoughts in the comments below!

Shalini_A is a long time Asian-drama addict. When not watching dramas, she works as a lawyer, fangirls over Ji Sung, and attempts to write the greatest fantasy romance of all time. Follow her on Twitter and Instagram, and feel free to ask her anything!